If Europeans romanticize history, meticulously preserving their cities as relics of the past, then Americans tend to the other extreme, all too readily scrapping the old in the name of progress. New York, though, is a peculiar case: a city with an abiding awareness of its history that regularly sheds its physical skin, only to mourn what has been lost in the next breath. Take, for example, the old Pennsylvania Station, right out of imperial Rome with its vast public spaces and towering colonnades: It is hard to imagine how someone could have thought that the brutal cylinder that has replaced it was a better idea. But then again, much of the city—especially Manhattan and, lately, Brooklyn—has been given over to the forces of development and renovation, and it is more than a little futile to decry the tidal wave of change that is eternally washing over this city. 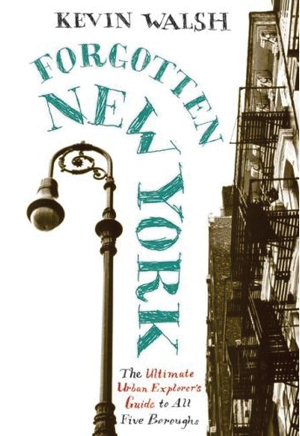 But we can remember, which is why Kevin Walsh’s Forgotten New York is such a useful tool for those who wish to peel back the layers of the city’s history. Walsh has been peeling them back on the Internet for years through forgotten-ny.com, a blog that chronicles his walking tours through the city in impressive, archival fashion. With camera in hand, he has explored virtually every corner of New York—from his boyhood home of Bay Ridge to the pastoral treasures of Staten Island—to offer an expansive commentary that covers neglected streetscapes, relics of New York’s manufacturing and shipping past, obsolete subway stations, and rustic scenes that may as well belong in Connecticut. A mere half-hour on the site (a difficult task, given its scope) will yield surprisingly captivating lessons on anachronistic lampposts in Queens or abandoned Dutch cemeteries in Brooklyn, not to mention walking tours that make notoriously bland neighborhoods like Midtown come alive with the entire vibrant history of the city.

And here lies the truth worth of Forgotten New York. While similar books advertise themselves as being tailored for natives (the ubiquitous but somewhat bland Not For Tourists series comes to mind), Walsh jettisons any such pretensions in this volume. After all, only a true lover of the city would perk up at the mention of a rusting staircase that once led to the famed Polo Grounds baseball diamond, or a fading turn-of-the-century advertisement for Herch’s Sacramental Wine on Orchard Street that recalls the Lower East Side’s industrious Jewish progenitors.

So here is New York, or at least Walsh’s version of it—a city of unruly history, rife with the dual violence of progress and forgetting, the past peeking ever so slightly through cracks in the pavement or narrow tenement alleys. In Bushwick he finds an erstwhile German singing hall, once grandiose but now used for purposes almost certainly more nefarious than music; in Queens, he wanders into Flushing Airport, long given over to decay, revelling in the discovery of “rusty hangars…an abandoned fire engine [and] a sign advertising the Steuben Society of America.” Needless to say, those in search of the latest East Village fusion bistro or Chelsea nightclub may want to look elsewhere: As far as Walsh is concerned, it’s all cobblestones and rusted el tracks.

The book is divided into chapters devoted to each borough, and, thankfully, Manhattan does not get prime billing at the expense of its four siblings. Detailed maps and a brief introduction precede the section for each neighborhood, followed by entries that describe Walsh’s discoveries, with a paragraph or two for each. It would be only fair to mention that there are some shortcomings here that are not present on the web version of FNY: Most notably, the photographs are generally monochrome thumbprints, while the pictures on the website are large and colorful. In addition, the entries in the book are fairly to the point, absent of the rambling, personal quality that earned the website such a cult following.

Nevertheless, this is an important addition to a body of urban literature that grows as steadily as the city itself. At a time when “starchitects” like Frank Gerry and Richard Meier leave their shimmering glass imprints all over the city, from Astor Place to Prospect Park, Forgotten New York offers a worthy reminder of what stands to be lost. After all, while Mayor Bloomberg may well be within the bounds of right (and, perhaps, reason) when he sacrifices yet another Williamsburg warehouse or Harlem brownstone block on the altar of redevelopment, there are some, like Walsh, who are fated to eternally gaze back into New York’s low-rise, cobblestoned past.