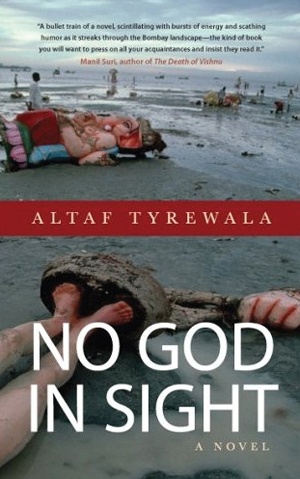 Among the novel’s catenation of first-person tales is the story of twenty-year-old Sohail Tamabawala, a young, lower-middle-class Muslim man who aspires to become a lawyer. He fears, however, that his religious identity will prevent him from improving his lot in life. Anti-Muslim sentiment abounds in urban India, and his anxieties aren’t unfounded. Sohail decides to change his name to a Hindu one. If the world perceives him as a Hindu, “he will travel freely around the country” and check into obscure hotels without being refused a room.

But the decision to abandon his Muslim heritage isn’t an easy one to make. “Such things are rarely done—and rightly so—for they alter something fundamental, something untouchable.” On the other hand, he comes form an “ethos where there is no limit to the violence one may wreak upon oneself or on others—the chest beating at Moharram, the rigid observation of prayer time, the slicing of goat-necks by five-year-olds, the slicing of day-old penises.” Unexpectedly, Sohail’s rancor towards society’s all-pervasive, abstract prejudice against Islam crystallizes into revulsion for his own faith.

This would-be attorney is one of the many lives in No God in Sight which are lived on the margins, at times of their own volition, anxiously grappling with the burden or deep unease of being a Muslim in India. Tyrewala does anything but exonerate the Hindu majority of its gut prejudice, even animus, against Islam. Indeed, this all-too-pervasive prejudice is his book’s context. But he also scrutinizes Muslim reaction to the stimulus of hate. As a result, he ends up skillfully showing the interplay between the prejudiced, the prejudiced against, and prejudice itself with a fair degree of detachment.

Advancing in crab-like, lateral fashion, the book’s numerous stories cut across social, political, and geographical divides. In each chapter, a new central character incidentally appears who is related to the protagonist of the previous chapter. Usually a Muslim, he or she carries on the meandering, feckless plot line, becoming a link in a seemingly endless chain of narrative. A young woman grudgingly braves an abortion supported by her disoriented, Nokia-clutching boyfriend; unlike his mother, the quack abortionist claims to have no qualms about his “cut, tears, and we all go home happy” routine; but he feels the need to be saved “from all the unborn-baby voices” in his head; a disaffected, unemployed youth starts teaching Urdu, a florid language known for its poetic expression; his student is a Green Card-holding kid who has taken up the language to woo his Pynchon-reading girlfriend back in America; a polio-stricken man running an Internet book business is asked to demonstrate the extent of his disability to his potential parent-in-law so they can sound out his suitability for their daughter.

Tyrewala’s universe is one in which taboos are broken, accepted, or negotiated, and anachronisms are perpetuated, negated, or indulged in; the mainstream and its corresponding victimhood are either embraced or spurned. He presents a comprehensive range of Muslim voices that argue with their faith and Mumbai, their benefactor-tormentor. But Tyrewala’s Mumbai isn’t India’s city of dreams and aspirations, a multi-faith, Hindu-dominated sanctuary, whose nascent capitalism grows steadily in sophistication. To him, the core of the metropolis is its conventional fringes and interstices, where Muslim lives are lived. His raw, gritty vignettes are a necessary antidote to images that are conveyed by works like Mehta’s Maximum City: Mumbai as a vital, pulsating place with new clichés, which has itself become globalizing, nuclear-powered India’s brand new shibboleth.

No God’s aside-like narratives at times lack variation in tone or style, which robs them of their impact and immediacy. But the book’s engaging multi-faceted exploration of religious identity provides nuanced insight into Indian Islam, its internecine struggles, and its contribution to the country’s million mutinies.

Hemant Sareen is a New Delhi-based reviewer and editor.