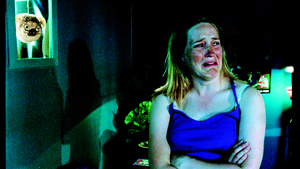 Eija-Liisa Ahtila, still from The Wind (2006). Three-screen installation. Courtesy the filmmaker and the Museum of Modern Art.

Eija-Liisa Ahtila’s The Wind (2006), a 14-minute, three-screen installation at the Museum of Modern Art, is a disappointment. Not so much for its filmmaking craft but for the tantalizing possibilities it raises yet falls short of realizing.

This is the first New York museum exhibition for Ahtila, an accomplished Finnish artist who walks the line between visual art and art cinema, showing her work in galleries as well as theaters. MoMA, accordingly, presented Ahtila’s 55-minute Love is a Treasure (2002), during a week-long run in October at the museum’s Roy and Niuta Titus Theater (individual screening dates continue through February 5, 2007). The theatrical film incorporates The Wind as one of its five stories and reportedly places its narrative within a broader context. Regardless, a work presented on its own should stand as such, and the thinness of Ahtila’s tale of mental disintegration shouldn’t be ascribed to the absence of extra fortifying ingredients.

The movie begins like a 1950s film noir with a slow pan of a city, presumably Helsinki, but quickly shifts to secondhand allegory as a furious burst of wind invades the interior of a sky-blue, IKEA-esque apartment, knocking a picture off the wall and unsettling the contents of a bookshelf. The wind diminishes as the apartment’s occupant, a blonde, heavy-set young woman, directly addresses the camera like a confessional performance artist, launching into her childhood traumas of obesity and poor grades. From there she touches on political rebellion and globalization, all in the airiest of generalities, and embarks on the methodical destruction of her furniture. A trio of beautiful but superficial teenage girls (a thudding allusion to all that our protagonist was not in her youth) enters unannounced, and a mysterious, sexy young man shows up to iron the woman’s newspapers so that her hands “don’t get black with ink.” The young man’s rejection of the her clumsy advances sets the stage for her final dissolution, symbolized by the sight of her magically creeping up the side of a wall and then perching on it like a forlorn raven.

There is little to indicate how much, if any, of the narrative is taking place outside of the woman’s own distorted perspective. From childhood on, she tells us, her lack of popularity, poor self-image, and bottled-up frustrations have compelled her to “stamp and bite” her hands. She repeats this assertion so often that it becomes the defining characteristic of her mania. Yet, when we finally glimpse a close-up of her hands, they’re curiously unmarred. What’s this all about?

The Wind comes off less as a poetic evocation of a psychological collapse than a vehicle for an absurdist, tragicomic fantasy. With its brimming sexual repression, surrealist touches, and paroxysms of destruction, the film unfolds like a précis of Ingmar Bergman’s Through a Glass, Darkly, The Hour of the Wolf and The Passion of Anna. But unlike Bergman, who etches with indelible detail the devastation that mental illness wreaks on its victims as well as everyone within their reach, Ahtila’s unstable protagonist exists strictly within the vacuum of her own tortured psyche. Her isolation from the “normal” social bonds of friends and family paradoxically shields the viewer from both identification and empathy.

Real mental illness is a harrowing and remorseless disease. To dress it up in metaphor and approach it in isolation is as trite and false as the mandatory uplift of a Hollywood ending. Ahtila’s The Wind cushions our visceral fear of insanity with the fanciful trappings of art and imparts a reasonably comfortable aesthetic experience. In contrast, an opprobrious flick like Lars von Trier’s The Idiots delivers scenes of out-of-control, frothing rage with an abject ugliness that leaves you shaken and appalled.

The severely mentally ill live within fluid parallel realities, unable to distinguish between internal and external stimuli. A multiple-screen format like Ahtila’s could therefore act as a formal correlative for a state of perceptual confusion in which documentary reality competes on an elemental visual level with memory and hallucination. It’s easy to imagine grainy home movies, faded photographs, obsessive close-ups, and digitally animated phantasms flashing across the three screens, distracting the audience from the woman’s monologue just as her own thoughts are invaded by impulses beyond her control. But Ahtila’s treatment offers little more than varying perspectives on the principle action, often leaving one or two screens with nothing to show but the background setting.

Ahtila’s use of multiple viewpoints might seem experimental when compared to the conventional movie-going experience, yet it reflects a drift in the popular imagination that’s eroding the very idea of objective truth. “Rashomon” has entered the vernacular as a catchword for competing versions of reality, and corporate culture has co-opted formal conceits like multiple screens, robbing them of their potency. At the end of the day, the most radical use of the split-screen technique might still be the final reel of Abel Gance’s Napoleon, year 1927.

One of the most intriguing exhibitions of recent years is Liliane Tomasko: Evening Wind at the Edward Hopper House. Scattered somewhat randomly upon the walls of Hopper’s living room and dining room in Nyack, the abstract painterly marks on surfaces of paper, notwithstanding their aggregation of luscious streaks and seductive palettes of subdued and brilliant hues, register as self-contained entities. Yet the seeming abstractions of Tomasko, framed within her overall body of work and the context of Hopper’s self-absorbed human figures, translate as conduits to the perceptual states of the human subject, as cryptographs of the subconscious, as passages toward the unconscious. These works compel us to reconsider the referent of the term “abstraction.”