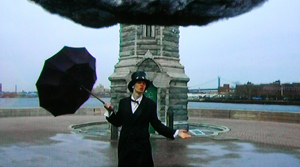 Still of “The Abandonments” (2005–2006), projection from a digital source. Courtesy of Team Gallery

Less wunderkind than gutless wonder, with past shows clocked at MoMA, the Whitney, Guggenheim, and Palais de Tokyo, at 31, these days, Bradley is nearly a mid-career artist. Time to pony up and deliver, not barely show promise.

“I watched the worst one all the way through. I thought that that one at least might be interesting.” (Overheard at the opening.)

What is it about the young, who always think that their “first time” is the first time that ever was? The title piece “The Abandonments,” Bradley’s facile, fatuous “projection from a video source,” too easily pleased with amateurishly maneuvering one turd-shaped cloud to “Singing in the Rain” across a louring Roosevelt Island sky—ejaculates prematurely, as if the first ever CGI! Flaubert, in 19th century Paris, was kind enough to consider this merely une sottise. A century later, Deleuze plain called it stupid.

Fluff. Kid stuff. Taking low to no risks, this chicken shit’s so equivocal it can’t be evaluated. Success does not mean we didn’t fail because we never tried.

Anemic cinema. Current concerns over cultural turns from language to image disturb me far less than the anemia of that image. (After all, we still have Text Messaging.) Given the glut of weak-kneed geeks tweaking screens, perhaps we should revamp the Stoic philosophers’ famous first question and now ask: Why do these puerile pictures exist, instead of nothing? The whole scope of The Abandonments’ reason to be brings to mind only the postscript to Alias, each episode of that primetime spy vs. spy series, which signs off with a smug blip-quip, “Boink! I made this!”

Laboriousness too is an objection. “For The Dark Night of The Soul” (whoo!) Bradley shoots a moon man blundering around in his bubblegum bonnet after-hours through New York’s Museum of Natural History, lost not so much in zero gravity as he is in that flat affect common to post-partum moms on prescription mood stabilizers. Is there no end to these relentless, unrepentant throwback acne‘n’Boys’ Life motifs? Star Wars; field trips; fan club posters of The Doors?

Poser. Hoser. Although the single salient motive for promoting young artists of such dubious merit to star status is financial speculation on their future output, most are one-trick ponies. This dog can’t even hunt.

Sadly Bradley, launched on his own cumbersome mission, plays out his losing hand while lacking the discernment just to fold his cards and scrap the works.

Sometimes it takes years to fully appreciate the importance of a work of art, to evaluate what impact it might induce, and to see it in the context of a legacy that has yet to be realized. So it is with Renée Cox’s monumental black and white photo diptych, Origin, created in 1993. Initially only the left half, a towering nude full-length self-portrait entitled Yo Mama, was exhibited.