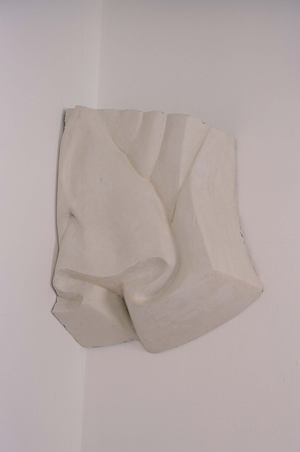 Joyce Robins’s ceramic abstractions and Harry Roseman’s simulations of drapery, curtains, and napkins can be said to occupy the historical category of bas-relief.

Common in Greek and Roman art, as well as in the bronze doors of Italian baptisteries, most notably Ghiberti’s in Florence, bas-relief is a form of sculpture that comes closest to being a painting, and it engages such formal painterly problems as composition, perspective, and the interplay of light and shadow. By exploring issues connected to contemporary painting, particularly abstraction and figuration, Robins and Roseman lift bas-relief out of the dusty museum basement. Rather than pouring new wine into an old bottle, they make the bottle itself new. In this regard, their work occupies the same terrain as Jasper Johns’s “Lead Reliefs.”

Roseman’s wall works conflate domestic life and monochrome painting, male and female sexual organs, and the acts of covering and uncovering that are an inherent part of both art and life. In “Raspberries and Cream” (2004), which is made of painted fired clay, Roseman registers with remarkable verity the horizontal crease, as well as the subsequent crinkles and crumples, of a pink napkin that has been unfolded and sullied at a dinner party. In addition to being a used and impure thing, the unfolded pink napkin seems to be saying that art must acknowledge time as well as function, something worth remembering in an age of spectacle and entertainment.

The emotional tone shifts in the larger pieces, in which Roseman carefully covers cut Styrofoam blocks with wall compound and acrylic paint. In almost all of his “Curtain Wall Fragments,” the configuration of the inwardly curving folds suggests a vulva, while the parallel folds evoke human flesh, or a body turning or bending. Something is both revealed and hidden. By mounting some of the “Curtain Wall Fragments” high on the wall, Roseman places the viewer in the position of a small child looking up at the naked mother, as well as that of someone sneaking a forbidden glimpse up a skirt. That Roseman can touch on this subject with grace rather than irony says a lot about the strength and power of his work.

In the cast polyurethane “Small Knot, Not Knot” (2002), a vertical red curtain, knotted at the bottom, evokes both male and female genitalia. Suddenly, Roseman’s seemingly straightforward presentation of a drape gives way to a provocative current of thought, which tempts one to look behind the curtain, so to speak. The knotted red curtain is adjacent to a closed rectangular one, continuing the theme of the hidden and the revealed, which, because of Roseman’s conflation of drapery and body, keeps doubling back on itself. For all that we see before us, there is at least as much or more that we don’t see. This constantly shifting duality extends to the “Curtain Wall Fragments” themselves, since a side view of the pieces reveals that they are made of Styrofoam.

Joyce Robins is an abstract artist working in ceramics, which means that she doesn’t make any of the things that we have come to think of as natural to clay—cups, vases, or figures. Unlike other artists working in clay, she fetishizes neither the medium nor processes such as glazing. The only other artists that I can think of who are working in similar territory, and take a straightforward, hardnosed approach to clay, are Mary Heilmann and the German artist Norbert Prangenberg, each of whom has made compelling abstract ceramic pieces. What these three artists share is a strong aesthetic stance that refuses to use clay to elaborate on a well-known form.

Robins works with three basic shapes: a plane, a circle, and a ball. Her ceramic slabs can curl up from the wall, as in “Horizontal Bending Rectangle” (2006), remain relatively parallel to it, or thrust straight out into the viewer’s space. In “Red Turned Circle” (1999), a red disc-like form bends sharply and extends perpendicularly outward, while “Red/Blue Bending Circle (Slipped Circle)” rests on the floor, its upper part nestled against the baseboard like a rubbery cartoon. The curling pieces cast shadows, further underscoring the work’s relationship to the wall, while other pieces are hung with exposed, long thin nails. By acknowledging the supporting wall or, in some cases, the wall and floor, Robins, like Robert Ryman and Jessica Stockholder, recognizes that art is not autonomous from its surroundings.

Robins structures her shapes with grids, holes, and cavities that look as if she methodically pressed a marble into the clay’s malleable surface. She also employs rows of crackled whitish protuberances, reminiscent of scarification, that are a natural result of firing. She will often paint the interior of each hole with a strong color, but use thin washes for the surface. The multiple grids compete with and complement each other, as well as punctuate the fields and bands of color to a hallucinatory degree. We keep changing our focus, and, like Alice, feel as if we’ve fallen into a mysterious wishing well. The intense busyness of Robins’s ceramic sculptures reminds us how often we don’t stop and contemplate nature, its relentlessness. It is quite clear to me that her work has both influenced her husband, Thomas Nozkowski, and most likely been the originating perception of some of his paintings.

It would be easy, and perhaps even a relief, to think of the work of Robins and Roseman as being idiosyncratic, but I think that would further deny these artists their due. Rather, what is more to the point is the astute and original ways their work touches on formal issues and subject matter. In an age dominated by repressive agendas, both aesthetic and political, these artists have not only gone their own way, but they have refused to take refuge in either idiosyncrasy or a decadent and theatrical style, infusing a seemingly predictable medium with hybridity and extending its parameters with uncategorizable forms.

Abolition of a Category

By Susette Min and Amy Sadao

Over the last several decades, scholars and curators have written about the historical richness and heterogeneity of Asian American art, yet art made by and about Asian Americans has remained for the most part unnoticed, an afterthought, or an oversight, especially in major thematic museum exhibitions and sweeping art histories.

In the late nineteenth century, Édouard Vuillard retreated from the dominant themes of contemporary French painting—Parisian nightlife, portraiture, bathers, and the landscape—and focused instead on domestic scenes as a site of interiority. His paintings were populated by friends, lovers, patterned curtains, flowers and dining tables; all manners of personal life redrawn into shimmering, patterned space to hallucinatory effect. The paintings were not a window into the world, but rather a world unto themselves.

Half a Dozen Fresh Baked Dances

Named for the patisserie that once inhabited the 1920s-era building, Art Cake has taken the gallery aesthetic to the extreme with white floors, white curtains, white track lighting. Though seemingly designed for visual rather than performing arts (the floor is cement), this year’s second ever Dance Series featuring six artists showed its potential as a home for experimental dance.