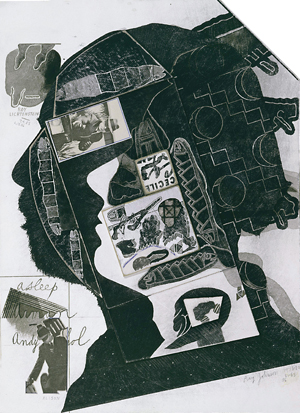 “Three things happened that year,” recalled Ray Johnson of 1968. “I was involved in a street fight, muggers tried to stab me in the back, and Andy Warhol was shot. The city suddenly seemed to be a disaster, and I decided to move out.” So came the impetus for Ray to resettle in Long Island, as recalled in “The Locust Valleyer,” Lightworks magazine, no. 22, 2000.

Ray was by nature solitary, and he lived a secluded life. His simple, gray, middle-class house provided perfect anonymity. All of his neighbors had the same take on him: friendly, but distant. His next-door neighbor for 27 years said they never spoke much, but simply waved. His postman did not know he was an artist.

The theme of the show at Feigen Contemporary, Ray Johnson En Rapport, explores the terrain where Johnson did interact, with other artists and friends, during his prolific life. More than 56 collages are displayed in a split-level space in Chelsea. On the ground floor are several large-scale collages reflecting Ray’s relationship with John Cage and Willem de Kooning (both lecturers at the legendary Black Mountain College while Ray attended that school). Also here are double portrait-collages of Andy Warhol and Roy Lichtenstein, seminal figures of Pop Art and Ray’s peers. Perhaps most representative is a Mona Lisa reproduction with a typical Johnson “bunny-face” superimposed over her smile.

Among the works on the second level are some never shown before, that reference the confluence and intersection of Johnson’s art with the changing social and cultural environment of the 1970s, ’80s and early ’90s. Some are a direct tribute to the artists he admired, usually in a hybrid form, composed from several other collages and with multiple dates attesting to the simple fact that the work was a secret diary, a record of meetings and events in the artist’s life.

Johnson’s reclusive tendencies contributed to an exacerbated need to socialize in a different way. Much of his socializing was one-sided and done from a distance. Rather than live in bohemia, he kept it in a personal phone/address book. He networked through New York’s downtown scene via mail and phone line.

By 1974, when I started collaborating with Ray (the first time at a meeting of the Paloma Picasso Fan Club at Ronald Feldman Gallery), Ray already was six years into his self-imposed exile from Greenwich Village. His art was not one of social comment but of sociability. He constructed a landscape of small wooden scrabble-like pieces, often featuring fanciful wordplay such as in “Fear Four Forks (Picasso)” (1967-1973), which is written on three cardboard squares with all the trappings of post-surrealist symbols: lots of black boots, weird child doll heads, antique postcards. Indeed, Johnson’s assemblages are bizarre sculptural compositions, pop-cartoons beyond 3D, multi-layered, sandpapered obsessively at the edges, all telling parables, recording coincidental encounters, full of encoded mysteries and clues about his life.

Johnson often picked up “crumbs of culture” and handed back the whole loaf of bread. His life happened to be a collage, so he depicted it quite realistically. Sometimes he used fields of monochromatic color (red, green, pink) protruding among floating ducks and swans (in this regard see “Untitled (Dear Marilyn Monroe),” a mixed media collage created from 1972 to 1994). It was while studying at the Black Mountain School that Johnson not only absorbed the foundations of his artistic techniques, but also developed a lifelong attraction to Zen philosophy, particularly in regard to the appreciation of chance.

In a famous photograph, Ray embraces two giant zeros, mirroring the “reduction to minimalism” or “zero-absolute” that fueled his so-called “nothings” and “silences” (such as a work consisting of writing 11 times: “I must keep my mouth closed when a visitor enters”). This silenzio (silence) as music, echoed in some works by John Cage, reaches fruition in Johnson’s “White on White” (for Merce Cunningham, 1965) and his “Snowball” (March 15, 1972), a plain circle sent in the mail to be enhanced by his fellow mail artists (“As soon as it melts,” commented Ray, “no one even remembers it”) as well as the “evaporations” and “distillations,” all among his favorite subjects and also the credo of his philosophy, shared amply with his Zen-Dada friends, that came down to the belief: “Nothing is actually something in art.”

On the other hand, “Green Hornet with Arman and Andy” (1976-1986) provides us with visual poetry, filled with code words such as: asleep, Andy, Cecile, Roy Lichtenstein, along with ubiquitous two-headed snakes on a double-tailed worm. And “SM all portrait of George Bretch” purposely misspells the name of George Brecht (Johnson’s fellow Fluxus artist) in a collage consisting of a black ant in a small wooden frame topped by a phallic piece of wood.

Bill Wilson, who wrote an intro to the show’s catalog, concludes that Ray “constructed more inter-relations with more artists than anyone else working from 1955 to 1995.” The “most famous unknown artist,” Johnson would create an entire network of art world celebrities within the space of a single collage, similar to the network of voluntary art participants he connected with his mail art.

Ray was a giant prism, reflecting and refracting the rays of avant-garde experiments and mail-art collaborations, amplifying all styles and quirks. “Ray Johnson’s history of video-art” (November 4, 1968) is one example; “Dear Joseph Kosuth” (1969–1980) is another: a dark composition of textures, squares, triangles, and circles accompanied by a devil face-to-face with a black Kosuth silhouette. “Dear Joseph Kosuth, How sad I am today. Ray,” says the text, which inspired a 1999 Ray Johnson exhibition and its eponymous catalog.

This show at the Morris and Helen Belkin Art Gallery, University of British Columbia, Vancouver, curated by Scott Watson and Michael Morris, was titled “How Sad I am today,” which exemplified Ray’s state of mind almost every day. He was sad about the state of “pop-shop” culture, sad about the death of his friends, sad about not getting enough recognition. January 13, 2007, will be the grim 12th anniversary of his suicide, but the mind games, decoded mysteries and emotional outcry of Ray Johnson still can be heard, radiating from his works with uncanny, uncompromising, and undiminished effect.

A book of delicate autobiographical drawings tells the story of two lovers’ forced separation. The book’s 5.5 inch-square format complements the intimate nature of its captioned images, as holding the book in one hand and flipping its pages with the other feels like unfolding a note that has been passed in secret.

The photographs he made in his last three years, which have the muted color particular to disposable-camera snapshots, convey a kind of restless energy and a bottomless curiosity about framing the world through a camera lens, even—or especially—through the small fixed lens on a throwaway plastic camera.