If you weight a piece of string and submerge it in a glass of water saturated with dissolved sugar, over a period of hours you’ll see crystals, “rock candy,” start to form on the string. In the late 1940s, American artists adopted, at least metaphorically, a similar approach to making art. 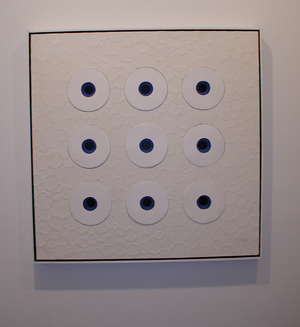 Disappointed with “pure” geometry and disinclined toward organic abstraction, they began creating constructions derived from elements of painting, sculpture, and architecture. George Ortman was one of the pioneers of this new form: directly constructed, simply colored, non-naturalistic concrete art that Donald Judd rightly saw as a predecessor to the stripped-down, singular forms that characterized ’60s Minimalism.

The exhibition, which chronicles Ortman’s mature work through 14 pieces spanning 48 years (1958-2006), opens with drawings, horizontal and vertical, 18 by 24 inches. These layered, analytical studies of Gauguin’s meditation on the stages of life’s journey distill “The Big Canvas” with a clear, remarkably sensitive outline that re-forms the figures as diagrammatic forces. The symbolic transformation executed through this alchemical process provides the artist with the basic elements of his iconography. It is unfortunate that Judd’s critical enthusiasm for Ortman’s work categorized him mainly as a formal innovator. Although the ingenuity of his constructions was plainly influential for artists as varied as Johns, Rauschenberg, LeWitt, Judd himself, and most recently David Salle, Ortman had a great deal to say. His work is richly associative and its power grows once you begin to decipher the symbolism. He uses a simple, “physical” geometry that embodies a long history, from “primitive” to academic, futurist to formalist, Greek, Celtic, Egyptian: mythic.

A 1965 essay by Suzanne Foley for the Walker Art Center identifies some of Ortman’s most frequently occurring symbols: square=intellect, circle=sensuality, triangle=ethics. The work has stories to tell, and the stories are big, anthropomorphic, Jungian. Four large pieces from 1958-1962 track the range of Ortman’s early vision. They have a simultaneous physical/material and spiritual weight that feels authentic. Geometry in art is a huge topic, and Ortman embraces it the way the Wright brothers approached the problem of flying: You close the garage door and don’t come out until you have something that might work. He glues canvas to masonite, cuts out shapes, gets an idea about hollow plaster forms, works it in. Miraculously the thing works. There is some close conversation with his immediate predecessors, Joseph Cornell and Alberto Giacometti, but Ortman’s thinking is public and dialogic rather than private and poetic.

“Narcissus”(1960) and “Circle”(1958) are exemplars of the work for which the artist is probably best known. “Narcissus” employs a large, inverted triangle above a vertical triangle of the same dimensions. Their apexes are offset about 1/4 inch. The offset appears accidental, but it cinches the title. Each triangle contains a white plaster disc in the center of rows of primary colored stripes—competing forces in precarious balance.

“Circle” contains nine 9” white plaster discs, three rows of three, on a patterned ground of cutout canvas circles. The effect feels static until you discover blue squares inside the hollow plaster. “Peace II” (1961) is comprised of crosses within crosses that form other crosses, orange on a red ground, with a green one in the center. Small painted blocks add a third layer of activity, but it’s unnecessary and might better have been the main subject of its own work. Similarly, “Omen” (1962) is a central circle of orange flanked by nine smaller circles. Around the central disc are vertically tiered, horizontal wooden bands with circular shapes cut from their edges. It has a naturalistic feel to it, like a sunset or sunrise over water. (“Red sky in the morning, sailors take warning?”)

The exhibition includes five sculptures of either cast marble or cast aluminum, each roughly 24 by 22 by 17 inches, made between 2004 and 2006. The sculpture uses truncated, vaguely anthropomorphic forms to create works that look like architectural models with a flow of space around a central core. “Oxaca” takes up the circle-hole theme and sets it as an elaborate game or ritual space. “Theme Park” explores organic/architectural concavity-convexity, contrasting rough and smooth surfaces. The forms “Anatomy Lesson” move slowly outward from the center. I was immediately reminded of Oldenburg’s similarly architectural “English Knees,” although Giacometti’s 1925 “Torso” is probably the reference.

Ortman was involved in experimental theater in the early 1950s at Tempo Playhouse in New York. His first one-person exhibition was at Tanager Gallery in 1953, not long after Giacometti debuted his walking figures in two major New York shows (1948 and 1950), which had a tremendous impact not only on the sculptural practice of the time, but also on avant-garde theater and dance.

Ortman’s work engages a wide variety of topics. His “insert” or “plug-in” idea changed the way artists thought about working in between two- and three-dimensions. He matured as an artist at a time when gestalt perception was a serious topic of general interest. This shows in his work, as does a sophisticated understanding of myth, anthropology, mathematics, and culture.

To fully grasp the current state, and the issue of water in general, we need to ponder the history of the waterscape in Puerto Rico and the changing social circumstances that have influenced its making, without losing sight of the role that both capitalism and colonialism have played in this process.