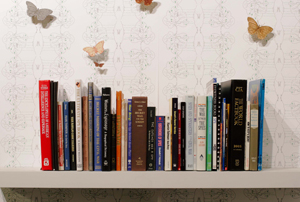 Set nearby the warehouse waterfront of Queens that is slowly being transformed into new urban developments, the SculptureCenter presents two exhibitions of equally grand scale that address pointed critiques of our postindustrial era. A monumental sculptural installation by Nancy Rubins and a large group exhibition titled Denial Is A River explore our collective iconography as it has been built up by the mass market throughout the last decade through physical and intellectual deconstruction, while suggesting new meanings with wit and cynicism.

Nancy Rubins creates her work out of a fractured environment, initially inspired by an earthquake in 1977 while the artist was living in California. At least 20 feet high, Rubins’ MoMA and Airplane Parts That Visited Fondation Cartier Pour L’Art Contemporain 2002/2003 Then Visited Forte Belvedere In 2003 and is Now at SculptureCenter (2006), consists of an aggregation of airplane fragments suspended in space by an intricate application of wire, while connecting to a relatively small, 5-foot steel base. Looming over the gallery space, the sculpture’s row of passenger windows, engine casings and broken wings echo John Chamberlain’s sculptures made from smashed cars, but while Chamberlain’s work is characterized by bright, vibrant color, Rubins’s is coated in dirt. The first version of MoMA and Airplane Parts… appeared in 1995 at the Gagosian Gallery in Beverly Hills, and later in 1998 at ArtPace Gallery in San Antonio, Texas. What initially appeared as a neo-Dada assemblage has, following the dramatic shift in global politics following September 11, 2001, become a gut-wrenching horror show. Without changing its appearance, the passage of time has increased the work’s emotional charge, timeliness, and urgency.

Denial Is a River takes up where Rubins leaves off by probing America’s post-9/11 power structure. The back room on the main floor consists of nine installations that turn aspects of mainstream culture on its head. Woojoo Park’s, “20.4754 cm” (2006) features two pairs of electric chairs made entirely out of A4 letter-sized office paper. “Virtual Intelligence Mask” (1993) from the Acconci Studios presents a live broadcast of the QVC channel playing across the screen of a small, 4-inch television attached to the mouth cover of a fencing mask. When viewed from behind, two monitors set in each of the mask’s eye sockets display live footage of two opposing corners of the room. Taken together, these two works delve into two of the primary goals of the neo-conservative agenda: federally sanctioned death and the pacification of the population via consumerism.

The manufacture of perception in American visual culture is evoked by Nate Lowman’s “CSI CNN” (2005), an 8-foot long C-print depicting four cable news stills, each with female anchors whose beauty easily eclipses their reporting skills, and continues into Geraldine Belmont’s “Liberty” (2002), which presents a falsely authored essay by Benjamin Franklin that argues why the Bald Eagle should not serve as the national symbol. Belmont also contributes “Jolly Good Fellow Club” (2002), an embroidered spoof on the infamous Yale fraternity of which George W. Bush was a member. This 25-inch circle of red velvet portrays an oil tower, bible, crusade sword and baseball spinning around the exclusive Skull and Bones logo, which looks more like the symbol for poison.

In the Center’s basement, Melissa Dubbin and Aaron Davidson’s collaborative installation titled, “CIA Reading Room for Kids” (2006), features a children’s table and chairs against a pleasant backdrop of floral wallpaper. A bookshelf, installed 3-feet from the floor, holds 39 books that the artists found on the C.I.A.’s Intelligence Book List for K-5th and 6th -12th Graders: Women in Espionage, The Ultimate Spy Book, and Sticky Situations, to name a few. This intimate space takes on the feeling of a bunker in relation to “Smokescreen (Lion & Gazelle)” (2006), on the opposite wall, a photo of an explosion detonating on arid land, its furious clouds of dust throwing into doubt whether the subject really is a lion and a gazelle. The photo is evidently meant as early visual training for armed combat.

The exhibition includes at least 15 more artists engaged in the push and pull of political irony, including Matthew Lusk’s, “Untitled Encampment”(2006), which includes tents, netting, and American flags blown by small electric fans in the outdoor courtyard. Denial is a River, along with Nancy Rubins’ MoMA and Airplane Parts…, evoke the state of socio-political conflicts that have engulfed global affairs and play on the anxieties that have emerged over the last five years: the American government’s carte blanche subscription to corruption; the pacification of its citizens with conspicuous consumption; militarism; domestic spying; terrorism.

In Lynne Drexler: The First Decade, simultaneously at both Berry Campbell and Mnuchin Galleries, we come across a voracious and novel form of late Abstract Expressionism. It’s a path that runs parallel to color-field painting, and in playing with discreet nodes of color owes as much to Klimt, van Gogh, and Seurat, as it does to Drexler’s mentor and teacher, Hans Hofmann. The paintings in these two exhibitions test out how best to manipulate the viewer’s response to associations of almost-pixelated color units, singular forms which attain a mosaic-like quality: working together but retaining their independence. This causes almost as much visual agita as it creates harmonic compositions.

With Blue River and Rainbow Waterfalls, Pat Steir has transformed Hauser & Wirth’s immense ground floor gallery in Chelsea into an arena for transcendence. We are lifted away by the gravitational pull of her monumental canvases, each awash with mesmerizing color and the movement of paint. Steir has been developing her mature work since the early 1990s, and her paintings today continue to command respect—and even awe—from their viewers. In her current exhibition, there are three bodies of work in which we are confronted with the sublime, each drawing us into its expansive space.

Al río / To the River

For the last six years, Zoe Leonard has been making photographs along the Rio Grande/Rio Bravo, particularly the many miles where the river is used to demarcate the border between the US and Mexico. The work is informed by the artist’s deep consideration of the river as a natural entity, and the human constructions engineered to control the movement of water, people, and commerce. The result of this durational engagement is a large-scale work, the first part of which is printed here: a series of eight close-ups of the river surface that expose and amplify the shifting tensions in the water's surface.