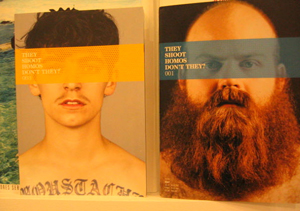 Drew Barrymore stared up at me, saying nothing. She looked elegant, her hair up in a bun, her eyes glowing behind dark mascara. She was perfect, except that her head was about the size of a giant pumpkin. Otherwise, Barrymore’s massive black and white headshot in Manipulator magazine looked like a vanity photo out of the 1940s. Compared to the other magazines lining the shelf alongside it, the Manipulator looked like it should be plastered to a wall. At almost six feet across and three feet tall, it’s the largest magazine I’ve ever seen. You could wrap a really big fish in this thing. Printed on thick newsprint, its pixilated covers, reminiscent of Eastern bloc propaganda posters, are dominated by single figures in monochrome: a cosmonaut; a Chinese girl; Brezhnev.

The Manipulator is the most physically imposing selection in an exhibition at Visionaire Gallery of the most “pioneering titles” of the last 200 years—magazines that have “changed the face of publishing.” Called MEGA ZINES, the show—a collaboration between Visionaire (the same outfit puts out the magazine Visionaire, a truly odd creation) and V magazine—combines an eclectic mix of fanzines, pop culture magazines, design-driven titles, and the just plain weird, that makes you question what a magazine is in the first place.

All magazines are, to some extent, vehicles for others’ expression, yet these titles are more expressions in their own right. The one thing about these magazines is they don’t fall into any recognizable category.

What they have most in common is their unorthodox aesthetic, more than any unified content. This could mean a total departure from the standard celebrity-infested, mass-market magazine, or its sarcastic cooption. Some have celebrity covers while others employ collage or minimalism. Their sizes and shapes vary as well, from gargantuan to mini. One fit in the palm of my hand.

The oldest magazine, from the turn of the century, is Gazette du Bon Ton, the first fully illustrated fashion magazine, on sale for $75,000. Its thick pages are full of early versions of the fashion shot, hand-painted men and women in the latest styles of the day.

Here is a glimpse of a few other titles: Butt, “a hysterical magazine for gay men.” Its small cover shows a man in tight royal blue shorts, leaning backwards from a bar stool. Specialten has no pages. It’s a magazine that isn’t really a magazine—it’s made up of DVDs. Bachelor, circa 1947, with articles titled “What price bachelorhood?” and “What makes the best mistress?,” seems to revel in a polite kind of mischief. Then there are the anti-fashion fashion magazine Streets and its Japanese counterpart Fruits. Both are filled with heavily saturated color street shots of urban fashionistas—fashion rebels who have finally achieved recognition.

Perhaps the most giddily playful periodical in the show is Re-Magazine, “a magazine about one person.” And it is just that. Each issue is covered with a portrait of a person and titled Re-2 Claudia, about Claudia, a very tall German woman, or Re-4 Hester, about Hester and her depression. Not famous, the subjects are just regular people. Each issue is a little biography, filled with photos of their friends and family—their lives.

Although this publication, out of Amsterdam, flips the paradigm of the celebrity-driven magazine, each issue, despite its inferred purpose, is the celebrification of its subject through glamour shots and sultry poses. So the question stands, is it a parody of popular magazines or a pale imitation?

Then there are magazines like Esopus. With a cover photo of a tree trunk, this magazine is hard to read, at first. But its opening editorial announces a clear purpose. Since “media creates, defines and limits our experience … Esopus’s goal is to allow thoughtful creative people to reach a receptive public with the purest possible form of their expression.” This is needed because “the demands of profit determine the color and content of every communication, diluting its message and compromising both the sender and the receiver.” Many of the exhibit’s other magazines implicitly make this statement—many do not. So it was a relief to open a publication that was straightforward about its reasons for existence. As Willa Cather wrote, “Economics and art are strangers.”

While it was fun flipping through these magazines, in the end I felt that there was no clear reason why these particular publications were brought together other than their “avant-garde” label, although the curators failed to explain what exactly they meant by avant-garde. If this illusive and overwrought collection were meant to represent a visual rebellion against the “culture industry,” it succeeded. But if this revolt was any more than skin deep it was hard to tell. And since the curators didn’t think it prudent to explain themselves, I had to guess.

Jonah Owen Lamb is a New York City-based writer born on a boat in Sausalito, California, a small town on the north side of the Golden Gate Bridge.

Holly Coulis’s brilliant, punning title perfectly captures the intellectual conceit that drives her equally brilliant show. Her work, picking up on the eyes in the title, has always been a matter of focus. How, in her earlier paintings, to perceive a still life: should the size of objects in a painting be determined by reality or should size have nothing to do with representational verisimilitude?

By Viviane A. Pistache

Dressed in a white coat, with blue eyes and authority the so-called Doctor certified: the woman had a Grandma the Portuguese would round up by lasso, the savage cabocla, a real bugre.

The Hare with Amber Eyes

The Jewish Museum’s present show is a spinoff of The Hare with Amber Eyes: A Hidden Inheritance, the best-selling book from 2010 by the British ceramicist and writer Edmund de Waal, an elegant, erudite, auto-biographical, and equal parts devastating and elevating family memoir. Designed by Elizabeth Diller of Diller Scofidio + Renfro and curated by Stephen Brown and Shira Backer in collaboration with the book’s author, the exhibition documents through 450 objects the rise, fall, and perseverance of the Odessan grain-merchants-turned-bankers Ephrussi family over a century and across three continents, and the odysseys of their prized possessions.

It is radical to comprehend the importance of the simple act of naming something in front of another person. Yet, poetry engages in this particular kind of conversation all the time, naming what is, to make possible what might be.