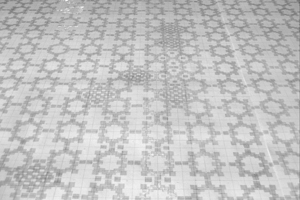 Don’t let the initial charms of the quiet, reductive logic of Marietta Hoferer’s drawings fool you. This artist may be a maximalist in a minimalist guise.

All of the works in this show are based on the same structuring framework, the grid, which is delicately laid out in pencil on paper. Upon this Hoferer applies transparent tape to build a diversity of systems and patterns with associations ranging from the molecular to the cosmic, the simple to the utterly complex, and the apparently serious to the subtly humorous.

Central to the art of this German-born, New York-based artist is the notion of the body as the filter through which the work comes into being. Artists such as Yayoi Kusama and Jackie Winsor come to mind when considering the repetitive (possibly exhausting) application of Hoferer’s abstract imagery and the extremely effective manipulation of her humble materials.

To make these pieces, the artist systematically builds a pattern with thousands of small squares of tape, ranging from 1/4 inch to nearly one inch. The combination of the slightly askew hand cut squares and their somewhat “off” vertical or horizontal position relative to the pencil grid underscores the work’s organic origins and recalls the homemade qualities of crafts.

From a distance the pieces of tape can seem like pixels in digitized imagery. Up close, we see traces of the artist’s hand, fingerprints embedded in the tape, and, by extension, the physical commitment involved in this process-oriented work.

Hoferer’s relationship to pattern places her in the company of artists such as Cynthia Carlson, Valerie Jaudon and Phillip Taaffe among others, who since the ’70s have used an abstract vocabulary to address issues of the tentative and the unstable.

While Hoferer’s works may appear to employ a repetitive system, once our eyes adjust, we begin to decode their expansive patterns to discover unique moments, irregularities and interruptions. Hoferer implies the notion of the ideal while simultaneously acknowledging its shadow of incongruity and imperfection.

The diagrammatic nature of Hoferer’s nearly colorless pages seem like evocations of the planar geometric veils of Arabic architecture, mosaics and textiles. Other patterns behave more symbolically—the very, very small or the very, very big—of that which is at the limits of our perception.

An equally compelling aspect of the project is the tape’s reflective sheen and the shifting direction of its texture as it is caught by the light. Hoferer playfully invites a level of viewer participation more often associated with sculpture than flat art. As we move, some areas of the pattern shimmer brightly while others sink back into a shallow space, engaging us in a kind of dance.

The work expands into real space with “Field” (1998-2006), a 140-inch by 108-inch six-panel piece, installed just within the limits of one section of the gallery and acting as a monumental field. Four sections of this very large piece were made in 1998, at which point the project was abandoned, rolled up and stored until this fall when the artist resumed work on it during a residency in Spain. As a result, the fresh tape of the last two panels is clear and bright white while the older tape has yellowed. Hoferer reclaims some of the older pages, however, by enjoining some areas of the older sections with additional pattern fragments and new tape, sowing the old with the new. It is a simple but inclusive gesture that acknowledges entropy, demonstrates change over time and provokes thoughts of renewal.

Artist-endowed foundations (“AEFs”) are increasing in number due to the convergence of three factors—demographic trends in the artist population, the continuing rise in the global art market, and artists’ desires to provide for their creative works and philanthropic interests in the long-term.