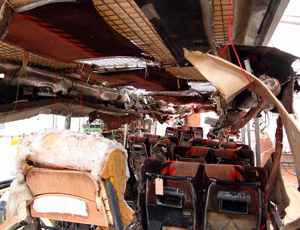 Representation and narrative seem to be the pervasive components of our current visual culture. Yet the idea of describing reality and telling its stories can take many forms, from painting to printmaking, that have served storytelling very well in the past. And now with installation, a form whose verisimilitude can reach greater heights of realism than most, we seem to have attained a state of “hyperreality.”

With three non-white-cube venues, the Swiss gallery Hauser & Wirth is certainly contributing to the climate of spectacle gripping the London art world. Coppermill is their “museum-sized” project space in the East end, first used by the Whitechapel art gallery for a Paul McCarthy installation (whitechapel.org), complete with boats and trailer homes, then inaugurated by Hauser & Wirth with a Dieter Roth and Martin Kippenberger show (ghw.ch).

Christoph Büchel’s “Simply Botiful” is such a larger-than-life endeavor that it nearly defies description. Similar in attitude to his 2002 installation at Maccarone Inc, this exhibition, which took four teams of technicians and specialists a month to create, is the size of a small shanty village. Coppermill’s gallery entrance is signalled by a simple—and deceptive—hotel sign on a busy commercial street; inside one finds a cheesy hotel reception area, albeit one with a gallery attendant asking visitors to sign waivers. From there, through a meandering corridor, we discover that Büchel has transformed Hauser & Wirth’s adjoining offices and storage areas into a succession of squalid rooms. To the ten or so chambers—kitchen, bathrooms, sitting room included—he has added numerous single beds, along with several others cluttering the corridors, that lend the rooms the appearance of cheap housing for day laborers. One room is evidently a prostitute’s, replete with underwear, sex toys, and used contraceptives: Tracy Emin eat your heart out!

For some artists, that would have been statement enough, but go a little further and you enter the cavernous warehouse that is the core of this space. Here, replacing Dieter Roth’s bar and studio project, stands a scrap yard, a used refrigerator showroom and repair center, as well as various stacked shipping containers that have been transformed into homes, offices, and sweat shops; all furnished and fully equipped, and looking very, very lived-in. More than merely possessing an apparent bed fetish, Büchel seems obsessed with recreating seedy rest areas of all varieties, such as the cargo area of a military truck that has been transformed into a slum dwelling, replete with bunk beds. It is his attention to detail—the dirty mugs, soiled paperbacks, cigarette butts, scraps of note paper, half eaten food, etc., particularly in the offices—that transforms this “realism” into tangible reality, as if one has walked into a highly detailed painting or film set. It is literally sprawling and awesome—that is, the sheer scale of this endeavor actually inspires awe. Büchel’s “piece,” if one can call it that, is like a Gothic version of Alice’s Wonderland.

At the far end of the above-mentioned truck lies Büchel’s real statement. A trap door leads to a low concrete bunker covered with prayer mats. Crawl to the corner, and a dark corridor leads you to another prayer room, albeit one wallpapered with pornography and lined with chairs and Bibles. This zone is not for those with claustrophobia or fear of the dark. Part of Büchel’s “aesthetic” seems to be the need to force his “participants” to move through uncomfortable and psychologically intimidating spaces. Next-door to these two chambers, in what at first glance seems to be a porn-lined exercise room for laborers (with a hanging fridge instead of a punching bag), a freezer in the corner provides an “escape route” into another world. Another wonderland.

Büchel has excavated into Hauser & Wirth’s connecting warehouse, and, crawling down a passage, we find ourselves in a deep excavation trench, sheltered under a large tent and surrounding a huge mound of dirt. At the far end of the trench, mammoth tusks poke out of the mound as if unearthed by a team of archeologists. Within the schema of Büchel’s shantytown, the pair of tusks seems absurd, almost like a McGuffin or a couple of props from an Indiana Jones movie (without Nazis)—all in all so very Hollywood!

Büchel’s work follows in the tradition of Paul McCarthy (whose efforts in the Coppermill warehouse were of equal intensity, albeit more sexual and abject), his Swiss compatriot Thomas Hirshhorn, Jason Rhoades, Gelatin, Mike Nelson (see my report last issue) and Gregor Schneider. The latter duo is also renowned for their eerie large-scale installations brimming with psychological potency, though Nelson’s work is less “representational” and more intellectual. Büchel, however, differs from them in his overt political flourishes; in that way, he seems to share the politicized attitude of Thomas Hirshhorn, though Hirshhorn’s projects possess more verve and a more positive outlook. In a sense these are “extreme artists” who create “extreme art.”

There is no doubt that this is a gargantuan effort, but is Büchel getting at anything besides “re-presenting” a certain degree of squalor? There is an eerie, even apocalyptic sense of abandonment here, not just of spaces but also of societies. Have the occupants run away? Is Büchel merely interested in replicating certain subcultures at the juncture of religion, fanaticism, and violence? In the refrigerator sales room—visible from the street in what is normally an art bookshop—there are carpets “decorated” with the events of 9/11 as well as Arabic translations of Mein Kampf. These appear to be real objects from the real world rather than artistic creations. By incorporating both Islamic prayer mats and Bibles into his installation, Büchel may well be “equal opportunity” in his critique. Although they are only a small part of his project, these flourishes seem to be the very things that give his “film set” a more serious edge. Is this the lifestyle of terror?

One of the first rooms of the installation may offer a clue to Büchel’s endeavor. It appears to be the room of an archeologist or anthropologist, with vitrines of bones and various academic books, tools and native statuary. Considering this imagery together with the mammoth tusks, is the artist reminding us that civilizations eventually become extinct? Travelling through the uncomfortable situations he has devised to view his art brings to mind the effort required to see the art of vanished societies in the prehistoric caves of the south of France, though a visit to Lascaux delivers a more elating sense of awe than a trip through “Simply Botiful.”

A byproduct of Büchel’s programmed discomfort is the way it fosters communication among visitors who in other situations would normally view art in silence. And finally I should note yet another quality that sets Büchel’s piece apart from the ordinary mega-installation, which is its aroma. While most exhibitions tend to be odorless, Büchel’s exudes a very secondhand, thrift store smell. Maybe he did not have to go to such extremes to achieve this, but then I suspect he has another agenda.

Soon after graduating from art school, a 21-year-old separates from his wife and moves from the city of Winchester near England’s south coast to London where he becomes involved with the avant-garde music scene. One day on the London Tube he runs into a former art-school classmate with whom he has lost touch.

This project developed from a conversation between Phong Bui and myself about art in the United States since what has long been referred to as the mid-20th century “Print Renaissance,” and my belief in the critica impact of printmaking on artists’ work in other media.