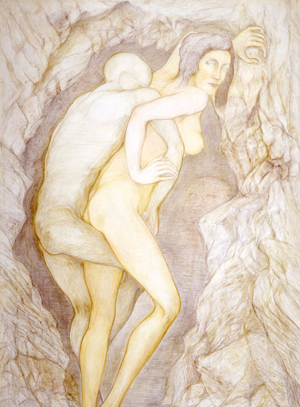 Pierre Klossowski and Hans Bellmer are two twentieth century figures whose controversial artistic production has limited their acceptance by the general public especially when compared with the international reputations of their immediate contemporaries. Paradoxically, Klossowski (1905-2001) was the consummate “insider.” His brother was the painter Balthus, his early mentors included Rilke and Andre Gide, and his philosophical writings and erotic fiction would eventually influence such intellectual supermen as Gilles Deleuze, Michel Foucault, Maurice Blanchot, and Jean-Francois Lyotard. However, Klossowski’s unusual sexual predilections and radical individualism have more or less confined him to the realm of esoterica. Bellmer (1902-1975), for his part, operated on the margins of major movements like the New Objectivity and Surrealism. His work was not exhibited in the United States until 1975, and as late as the mid-nineties, prior to the publication of Peter Webb’s definitive exposé, he had yet to receive major notice outside of France and Germany. In the past ten years there has been a surge of interest in both of these artists. Their double billing at Whitechapel Art Gallery this past November—the first major retrospective for either one—presented an incomparable feast for the Sadean imagination.

It may be worth mentioning that this is not artwork for the prudish or the fainthearted. The exhibit at Whitechapel showcased some of the more challenging imagery produced by any artist in the last century. Both Klossowski and Bellmer take as their intellectual foundation the locus of thought epitomized by the Nietzsche/Sade/Bataille triumvirate. Bellmer, in particular, is capable of stirring unsettling thoughts like few others. But the aggression purveyed in these artists’ work is deeply connected to significant humanistic imperatives. Their attacks on the conventional thought-patterns of their time are among the most effective waged by members of the interwar generation.

Content-wise, there is extensive overlap between their competing oeuvres, though the two figures vary widely in terms of the visual material itself. Whereas Bellmer’s Dürer-esque draftsmanship and compositional mastery tend to dress up even his less-accomplished works, Klossowski’s belabored drawings bring his fantasy-born scenarios (sometimes laughably) to the fore. Issues of the gaze are essential to both artists. Frequently a normative viewer is presupposed in what are consistently graphic representations of deviant sex acts. The erotic allure of the works implicates the beholder as voyeur and imaginary abettor of the scenes depicted. Repeatedly, this complicated stratagem of visual discourse rescues the work from its ostensively pornographic prescription.

Several of the Klossowski drawings were made as illustrations for his erotic novel, Roberte, ce soir, after the images he commissioned from his brother, Balthus, failed to live up to Pierre’s voracious expectations. As a young man, Klossowski had been called upon to illustrate Gide’s great novel, Les Faux-Monnayeurs, but was turned down by the author when the drawings he produced were too risqué. The several illustrations of Roberte, then, which portray Klossowski’s own mistress engaged in diverse and imaginative sadomasochistic tableaux, have about them the air of just desserts. Although the misogynistic underpinnings of the drawings are irrefutable, a theatricality of bodily expression allows the female figure to attain a degree of sexual predominance, even as she is defiled by her gaunt, sometimes faceless suitors. One senses that her assault is merely “acted out” fantasy, a scenario impossible without her willfully passive participation. 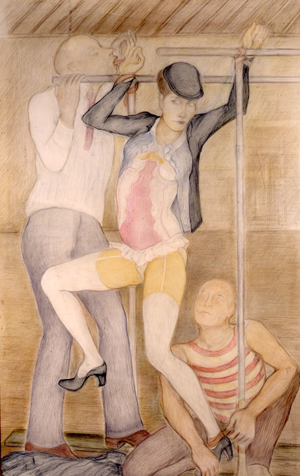 The label “misogynist” is one that has been hurled more viciously, still, at Hans Bellmer. The child-like puppet or mannequin (Die Puppe) that Bellmer repeatedly objectivized, vivisected, dismembered, and otherwise debased in his photographs from the 1930s would seem the exemplification of female tractability and bondage. Again, the language of pornography is at work in his carefully arranged compositions and his use of conventions such as the photo-tinting that appears in several of his works. The overriding theme is erotic fantasy mingled with thanatotic obsession. Frequently, Bellmer’s images resemble a vicious crime scene, wherein the viewer is positioned as the psychological investigator of a profane act that, in its sublimity, exists beyond the limits of photographic representation. Perhaps it was with the intention of overcoming these limitations of medium that the artist later discarded the camera for paper and pencil.

Conventionally, Bellmer’s photographs have been read as a reaction to the race-based, biological standardizations proffered under Nazism. But this should not be used to gloss their excruciatingly personal nature. Bellmer has discussed these works as a therapeutic catharsis for the suffering he incurred during his upbringing in an oppressively patriarchal household. These “Daddy issues” would later be reflected in the artist’s merciless rebellion against all autocratic postures and conventionalities.

Whether we choose to view the creations of Klossowski and Bellmer as “erotic art” or as mere pornography depends to a large extent on the preconceptions that we, as viewers, bring to bear on the work. For recent critics, this distinction has ceased to be of prime importance, which is to say that the work has achieved a status wherein its justification is taken matter-of-factly, thus opening the door to more heightened forms of critical debate. To be sure, one cannot come away from a show like this unaffected. At best the viewer is forced to confront what Peter Webb refers to as “the totality of human experience”; at worst, these works produce merely shock and dismay. Here it is perhaps best to refer to Hans Bellmer’s own most quotable phrase, which the curators themselves seem to have fastened upon as a justification for their project. “If my work is found to scandalize,” says Bellmer, “that is because for me the world is scandalous.”

In 1976, the shop stewards at the British Lucas Aerospace Corporation published a document that would come to be known as “The Lucas Plan.” The company was planning to lay off a significant number of workers as part of a restructuring effort. Faced with the prospect of losing their livelihood, many of these workers banded together to propose an alternative: that the British government should intervene to prevent layoffs so that the workers could redeploy the productive assets of the company towards socially useful ends rather than military contracting.

Encounters with the Unknown in a Catalogue Raisonné Project

How can we observe Motherwell’s reworking of his canvases (and titles) through their exhibition history? How did critics understand his early work, before signifiers like “Irascible,” “New York School,” and “Abstract Expressionism” cohered around Motherwell and his contemporaries? My colleagues and I were enmeshed in these questions (and more, so many more questions), as we delved into the pleasures (and frustrations) of research.