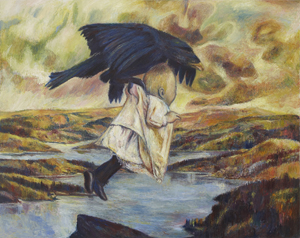 Keith Mayerson got noticed quickly for an early drawing suite, winningly titled Pinocchio the Big Fag, as well as for his collaboration with author Dennis Cooper on the graphic novel Horror Hospital Unplugged. After priming his audience for more crisply drawn homoerotic narratives, Mayerson executed an abrupt volte-face and started making looser gestural paintings (often abstract) that required some catch-up time on the part of viewers. Artists in New York are seldom rewarded for dramatic shifts of course, which tax the overburdened short-term memories of critics and collectors. But with the benefit of hindsight, Mayerson’s willingness to follow his impulses across a broad visual terrain makes him an artist of considerable depth and bravado. His investigations of identity and desire are all the more authentic for his willingness to follow their trail across stylistic boundaries.

Kings and Queens, Mayerson’s recent show at Derek Eller, is an elaboration of his current method: the painterly treatment of sourced images grouped under a loosely-defined theme. This time the artist focuses on figures who have played pivotal roles in the media, if one takes that term broadly enough to include characters as diverse as Eleanor Roosevelt, Proust, Keanu Reeves, and King Kong. Mayerson embraces a catholic range of stylistic forebears, and his maximalist painting manner is capacious enough to allow for a host of formal references. “Love Triumphant,” a painting of James Dean masturbating in a tree, recalls the dense, decorative fields of Gustav Klimt, while “Elvis ’56” evokes the fevered nightclub scenes of Otto Dix by way of the Ashcan School. The array of Mayerson’s subjects creates an interpretive context richer than any one work. A painting of The Wizard of Oz quartet alone might not defeat the camp quotient of the image. But taken with “The Abduction of Ganymede,” a mythical-looking scene derived from an early special effects film, one is sensitized to a subplot in Mayerson’s choice of Dorothy and her cohort: The Wizard of Oz as proto-science fiction and modernist myth.

Many painters in the past decade have looked to the history of film and celebrity culture for inspiration and have often appropriated images directly from film stills or photographs. The hallmarks of this practice are often esotericism of reference and formal brevity. Because the artist is selecting an image from the enormous data bank of popular culture, the value of the image is derived from its scarcity and the depth of the artists’ research, inviting the viewer to act as hermeneutic sleuth or initiate into unfamiliar signs and subcultures. This in turn leads to a tendency towards reduction and simplification: because the artist is working from a highly complete source image such as a photograph, and wants to make legible certain iconographic qualities, he or she is best served by presenting it in a visually simple manner.

Mayerson’s work is unusual in that he inverts the economies of appropriationist painting. Rather than selecting obscure images and painting them simply, he chooses subjects with near-universal recognizability and paints them within an inch of their life. This suggests that the artist’s investigation of popular culture is occurring in a different register, one in which the aesthetic of the researcher is replaced by that of the partisan, and the desire for communication through shared experiences trumps the connoisseurship of rarefied images.

Collaboration in Printmaking: An Influence on Creative Thinking

I have often wondered how artists feel about working in printmaking. Does it influence their creative thinking in their primary medium? Do they enjoy working with another person to make their images? Are they excited about the act of printmaking or is it just another source of their livelihood? I have asked several to express their opinions and hope you find their responses informative.

A Posthumous Palindrome: Raúl Ruiz & Valeria Sarmiento’s The Tango of the Widower and Its Distorting Mirror

Ruiz’s unfinished first feature becomes his second posthumously completed one through a spectral collaboration with his wife and chief editor Valeria Sarmiento, whose conceptual coup realizes his long-held desire to make a palindrome film.