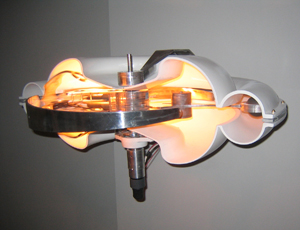 The objects produced by Erik Guzman leave this viewer in a conundrum. Are they machines that want to be sculptures or sculptures that want to be machines? The Futurists theorized about sculpture that would incorporate mechanical motion and celebrate modern life. Shortly thereafter Duchamp stuck the front fork and wheel of a bicycle on a stool and the world of sculpture has never been the same. But where the Futurists envisioned a technological utopia, and Duchamp created a whimsical sexual metaphor, Guzman’s “The Lost Sense” seems to represent a philosophical cul-de-sac for both these directions.

Walk past the two tall sheets of sandblasted aluminum with their oddly decorative symmetrical cutouts propped against a wall of the first gallery and proceed into the darkened second room. You are confronted by a strange, space-age contrivance, attached to the far wall just below eyelevel. This “machine” features a centrifuge-like device with a thick, sleekly milled spindle axis, measuring about three feet across. A solid steel sphere, slightly smaller than a hardball, is mounted on the end of one arm. This is counterbalanced on the opposite end by a broad, polished metal strip with curving eyelets, countersunk screws, electrical wiring and a bank of 650-watt theatrical light bulbs. A sleek white aqua-resin cowling with a circular channel encases the rear two-thirds of the object. On the floor is a carpet of Beuysian felt extending about eight feet in front. At this point “Lost Sense” appears to be a static group of beautifully crafted objects, all of the metal parts having been fashioned from the cutouts from the larger of the two aluminum sheets in the front gallery.

Now the fun begins. A sensor pad under the carpet activates “Lost Sense” when an unsuspecting spectator approaches within a meter of the thing. Slowly the arms start to rotate within the resin cowl. In a moment the light bulbs begin to shine with a dim, red-orange glow. As the rotational speed increases, so does the brilliance of the lights. Within 30 seconds the light reaches a blinding level. You can feel the blast of radiant heat with each rotation of the lighting bank. The entire gallery is engulfed in the zooming, strobe-like beams projected from the rotor. The lights blast, the axis whirs, the wall begins to vibrate. The gleaming aerodynamic forms start to look threateningly like weapons. At some point most observers standing close to “Lost Sense” begin to move back for fear that something bad is about to happen, an over-amped piece of high-tech art accelerating into the danger zone.

This fearful awareness is exactly the response the artist is seeking. Mankind, it seems to Guzman, has lost much of its innate sense of self-preservation. The technological utopia, dreamed of by the Futurists, has become a nightmare overwhelming us in a sea of useless stimulation. It’s too late for clever polemics or philosophical demonstrations; only a threat to life and limb can hope to penetrate the ennui and register the urgency of the situation. But it’s not just a fight or flight response that “Lost Sense” triggers. It also exerts a curious magnetism, a desire to experience the flat-out power of a work of art and the possible disaster it might cause.

As for the question of whether “Lost Sense” is a machine or a sculpture: traditionally sculpture is defined as an aesthetic treatment of three-dimensional form in space, while a machine is any combination of interrelated parts that employs energy to perform a task. Therefore, in traditional terms, “Lost Sense” is a machine, but a machine whose function is to produce a specific aesthetic result. Can a jolt of fear and trembling be valid responses to visual art? Perhaps. Just don’t stand too close.

Adam Wilson's latest novel Sensation Machines, released in paperback this month by Soho Press, depicts an economic collapse that seems not so much plausible as inevitable. We follow the unravelling through the perspectives, and the relationship of, Michael and Wendy. Their contrasting temperaments offer a parallax view of society. What struck me most, however, was how Wilson approaches our fractured and crumbling world with an anthropologist's eye—an eye focused on our strange, mostly arbitrary, economy of desires and what motivates our everyday insanity.

Todd von Ammon and the gallery have together curated a menagerie of form: these objects may illustrate the history of sculpture, they certainly depict its various categories and typologies, and all are very small. They veer from the figurative to the abstract, the absurd and surreal to the conceptual and symbolic.