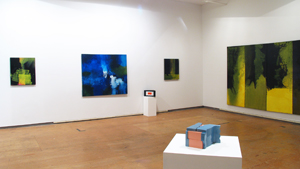 At Sideshow, Lye’s sleek but whimsical sculptures initially function as highly resolved portraits set against Mulder’s dreamy, recessive landscapes. Like photographs with no depth of field, Lye’s objects gain definition and focus in relation to the paintings. “Blue Crush” (2004), a small, cobalt blue enamel box-like structure benefits from the backdrop of Mulder’s “Am Rande der Nacht” (2006) with its translucent sectional panels. Lye’s sculpture simultaneously reads as a contained, solid object and a construction of modular components reminiscent of Lygia Clark’s “Animal” sculptures, or possibly an assembled MENSA puzzle.

The puzzle paradigm seems even more appropriate compared to a work like Lye’s “Cutaway” (2001), a small horizontal object shaped like a staircase from cubic units. The core of the object is an intense orange surrounded by powder blue, with darker ultramarine blue cubes on the exterior. Its finely crafted geometry conjures up references to Tony Smith and even Sol LeWitt; however, the work provides just enough color and whimsy to eschew the reductive stereotype. More playful, and tipping the balance further from reduction, is Lye’s “Tropical Sandwich” (1995) with its horizontal stack of brightly colored organic forms resembling thick Matissian cutouts.

Jan Mulder’s paintings also thrive on their own competing relationships. The Dutch journalist and art writer H.J.A. Hofland has noted that Mulder’s work represents the “continually surprising, continually shifting milieu which dreams conjure up for us, and which continue to elude us.” This is especially true for the multi-paneled abstraction “Am Rande der Nacht” with its atmospheric deep blue, forest green, and splashes of washy lemon yellow.

Mulder’s other large sectional painting at Sideshow, also entitled “Am Rande der Nacht” (2006), succeeds along similar terms. The diaphanous layers of deep, flowing Prussian blues on the right half of the work conjure the effect of gothic, moonlit landscapes, less literal than imagined. But in the same breath, the accompanying flat monochrome panels in both of these paintings stifle their romanticism and indemnify the emotional gamble, suspending them in psychological limbo.

Just as the viewer wants to peg these two artists as contradictory, their formal similarities begin to surface. Mulder’s densely colored atmospheres, although gauzy and gestural, are saturated with pigment and rationalized by the accompanying monochromes. Similarly, Lye’s sculptures frustrate their initial reductiveness with rich, synthetic color.

The relationship between Mulder and Lye’s work is conspicuously different in Holland Tunnel’s condensed interior. The two artists’ work is both literally and figuratively brought together. The heightened color of each is emphasized as the scale differences, so apparent at Sideshow, are diminished. The artists and the gallery directors seem to have calculated the disparities between the two bodies of work as well as the exhibition spaces, and, to the credit and benefit of all parties involved, framed them to elucidate the unique attributes of the art.

In Double Feature, both artists subtly enter a discussion on preconceptions about “Art” and how those presumptions influence the perception of their content. To succeed in such an endeavor, a work needs to walk a fine line between what it is and what it is not. Though Bix Lye and Jan Mulder don’t portray themselves as formally similar artists, their work ultimately merges on a level beyond visual appearances. In the case of Double Feature, the superficial incongruity demonstrates that juxtaposition and placement are as instrumental as the art itself in teasing out its most subtle intentions.