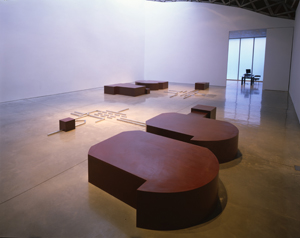 Barry Le Va’s current show at Mary Boone is restrained to the point of discomfort. Large chunks of cast resin and rectilinear segments of aluminum are positioned around the gallery according to an impenetrable logic laid out in drawings on view in the gallery’s small rear office. Telltale signs of pointed decision-making are everywhere apparent but the show is obstinate in its refusal to reveal the reasons for those decisions. Such obscurantism might not be so noteworthy in the work of a lesser artist, but Le Va’s art possesses a quality that has become increasingly rare in reductive art even as the genre itself has proliferated: emotional depth. Yet it refuses to communicate—the cardinal sin of emotional relationships, to shut oneself down. Le Va’s restraint is not a formal conundrum; it is evidence of a rich narrative deliberately withheld.

Minimalism, in the classical sense, eschews all narrative other than analogy. One might think of Judd or Flavin’s work as analogous to certain phenomena in nature that, projected onto human psychology, develop into a form of narrative. This may seem a stretch, but it’s indicative of the lengths to which late 20th century artists have gone to distance themselves from literary analysis and its hold on classical art. Although its formal rigor is comparable to that of Minimalism, Le Va’s art does not take a circuitous route to narrative but gives us a plain look at his thought process as it develops. It feels intensely personal, private even, and the sculpture on display is but a singular stage in its evolution. This is where Le Va parts ways with mainstream minimalism and aligns himself with a less “pure” strain of late 20th century abstraction that stems, like minimalism itself, from Tony Smith’s sculpture and includes Ronald Bladen, Chris Wilmarth, and John McCracken.

“The ‘blood and guts’ of horror movies provides for their ‘organic needs,’ while the ‘cold steel’ of Sci-fi provides for their ‘inorganic needs,’” wrote Robert Smithson of his generation’s fixation on movies, “Artists that like horror tend toward the emotive, while artists who like sci-fic tend toward the perceptive.” Though he wasn’t speaking of Le Va in particular, the two were contemporaries and Smithson certainly would have been aware of his work. So where would he have placed Le Va? A horror watcher or a sci-fi connoisseur?

Le Va fits both categories. Perception in art is the mechanism with which emotional reserves are tapped. Le Va’s art turns the cool and unsettling feel of non-anthropomorphic substances into a vehicle for a cryptic, human freight.