Define and narrow me, you starve yourself of yourself. Nail me down in a box of cold words, that box is your coffin. I do not know who I am. I am in astounding lucid confusion. I am not a Christian, I am not a Jew, I am not a Zoroastrian, and I am not even a Muslim. I do not belong to the land, or to any known or unknown sea. Nature cannot own or claim me, nor can heaven, nor can India, China, Bulgaria. My birthplace is placelessness. My sign to have and give no sign. You say you see my mouth, ears, eyes, nose—they are not mine. I am the life of life. I am that cat, this stone, noone. I have thrown duality away like an old dishrag. I see and know all times and worlds. As one, one, always one. So what do I have to do to get you to admit who is speaking? Admit it and change everything! This is your own voice echoing off the walls of God. 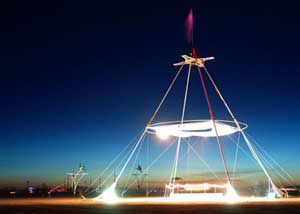 Light becomes difficult to discuss precisely because it is intangible. It is both wave and particle and by virtue of that neither. It can not be held, tasted or touched. It can be felt, indirectly, as heat. It can be seen only when bouncing off another object. Ultimately it can only be understood not through language but through music. Aspects can be hinted at discursively, but light is and can only be poetic. As soon as it becomes bound in prosaic words it disappears, like water through fingers.

When working on a play I find it can be counterproductive at times to talk about the lighting. As a result, it must be talked around. Astronomers discover black holes not by seeing them directly, but rather by how they influence the things around them; so too is it with light. This is not a cop out. Rather, it is inherent to a medium so slippery and mutable as light.

Light is never still. Observe a sunset. From second to second the colors are constantly shifting, deepening, appearing and disappearing. Like a symphony it moves and develops over time to the final climactic rays of the sun before night quickly falls. I love DJ music. A good House set to dance to at six in the morning when your brain can’t work but your body still wants to move. Nothing is better. You turn your mind off and let the music take control. The beat might not vary much at all over several hours, but the beat is only the beginning. The foundation. It is the punctuation in a sentence or a book. Very complex instrumentation fades in and out of the music over many individual tracks. A flute becomes guitar becomes trumpet and back to a flute, two hours later. It is not a linear journey but rather a long and winding path filled with detours and sidesteps.

The DJ set brings to mind Mozart’s Requiem or perhaps a Wagner opera. The use of themes repeating and evolving in their repetition. Quite often in a play with numerous scenes we find ourselves returning to the same location at the same time of day. The lighting for these different scenes might be identical according to the computer controlling the lights but the scene preceeding it is different as is the action occurring on stage, and thus the lighting appears different to us as viewers. The individual instance of the leitmotiv may be identical taken on its own terms, but it can not be taken apart from the interconnected network of the dramatic action. Just as light changes its fundamental characteristics depending upon whether it is measured as a wave or a particle, so too will a lighting composition change depending upon the dramatic lens through which we view it.

Light too cannot and never does stay still. Even when it does not move. Standing at Penn Station one evening I observed one of the most amazing light cues I have ever seen. The crowd of late winter, dark heavy jacket wearing, commuters were all standing still looking up at the track listings. When the new listings came out they all scurried away to their trains. The light in the room suddenly became more present, more full. It became brighter, but also more solid. This amazing light cue was not due to any change in the levels of electricity being sent to the lights. Rather it was caused by the sudden absence of those light absorbing jackets. And so the light was left to bounce off the floor and walls unimpeded.

Rumi may as well have been describing the light on stage when he discussed the inner spiritual light of man. Both are beyond the possibilities allowed by dualistic thinking. Light, like the human soul, is not and can not be the “same river twice.” Every time we return it is to a place familiar yet different. Known yet changed.

The Theatre, as a rule, addresses the life of the mind. It is psychology manifested. In The Dance we see the life of the spirit inhabiting the body. As Peter Brook notes in The Empty Space, there is a “Holy Theatre” but too often the life of the soul is ignored on our stages. Nietzsche’s dead god and the politics of deconstruction have removed spiritual concerns from our stages. Light, the music of the soul, still must navigate the intersection of the mind and soul.

Brook’s Holy Theatre was not a call for a return to the didacticism of Everyman. It was rather an exploration of the possibilities of the soul. That deep dedication and expression is too rarely seen on our stages. Yet this life is present today. It is present in music, as strong as it has ever been. Even avant-garde works of the mid twentieth century such as 4’33” show an interest in the meditative life of the self.

Trance music, be it a DJ behind turntables or a Gypsy in the desert, calls one to explore their inner life beyond the trappings of society. Light, in the theatre, just like music, has the potential to call us towards a deeper and more reflective place. It can show us the soul behind the words. The life hidden between the lines.

Lucas Benjaminh Krech is a New York based Lighting Designer. His portfolio can be seen at LucasKrech.com. He also maintains a weblog at lucaskrech.livejournal.com.