In the fall of 1988, Siobhan Meow entered 21-23 Avenue C with a flashlight. The stairs were broken up with a sledgehammer, syringes lined the floor and holes in the roof lit the debris collected over 12 years of abandonment. For Meow, this place represented new hope. She had been living in the basement of a local community center and didn’t have the funds to rent an apartment. Instead, Meow sought out an alternative living arrangement: live for free in a forgotten part of the city in a forgotten building, and make it yours. 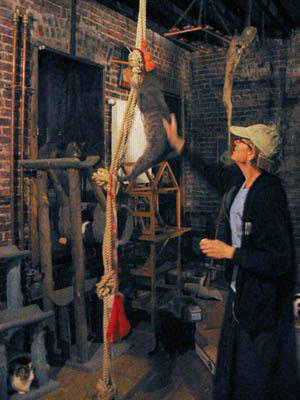 By the late ’80s, Alphabet City was littered with abandoned buildings after a downturn in the economy led to mass foreclosures. Local businesses closed, arson became all too common, landlords left and squatters moved in. For most, like Meow, squatting was out of necessity.

Nearly 20 years later, Meow still lives at 21-23 Avenue C, where a spray-painted message on the front door recently read, “Yuppies stay on the other side of Avenue B.” The building is called the Umbrella House because of the early days when inhabitants used umbrellas indoors. Cinderblocks disguised by orange paint block the former storefront space, and the ubiquitous three-dollar black umbrellas, painted yellow, green and white as if some part of a community project, hang from the fire escapes.

Meow emerges from the building with her honey-colored curls tucked under a white sunhat. She is tall, even with slumped shoulders. Her skin doesn’t give away her age, which I guessed from her stories to be nearing fifty. Large hands and broad shoulders are the only physical attributes that make known her past, when she lived as a man. She is moving slowly, recovering from a recent surgery, so we ducked into the nearest café – one of the new cafés in the Far East Village, lured by cheaper rent but struggling because of a location on a less-traveled side street. This particular café has the best almond croissant I’ve ever tasted, but the atmosphere is a bit gaudy, with golden chairs, a leopard print divan and glass table tops.

Meow is a little suspicious of me at first, so I attempt to win her over with a gift of catnip and some lunch. She orders a duck pâté sandwich with cornichons saying, “It would be hypocritical for me not to eat meat, living with 42 carnivores.” Her carnivorous roommates are her cats, from which she takes her name, and with which she shares about 800 square feet of living space.

She shows me pictures of her cats as we eat. For each photo she tells me a name: Neferkitty, Buick, Monk and Mr. Yams. At one time she had 89, but she only takes new cats with a donation now, and most are listed for adoption on Petfinder.com. Her income comes from cat sitting, though she says that people are going on fewer vacations than they used to.

Meow grew up in rural Pennsylvania, where she was married and fathered two children. After the birth of her second daughter, Meow told her wife that she’d rather live her life as a woman, and that she was primarily interested in men. “Of course she didn’t want to be a lesbian and neither did I, so I had to leave,” says Meow.

Meow’s daughters were six and two when she left. “My older daughter hates me,” she says. “She was old enough that she had an idea of me as the male persona I created to deal with society, and she blames me for killing that image. My younger daughter and I are close,” she continues. “She lived with me for two years before moving to Brooklyn with her boyfriend.”

Upon coming to New York, Meow worked various odd jobs, such as posing for life drawing classes, and moved into the basement of ABC No Rio, a community arts organization on Rivington Street. She began to wear women’s clothes and take black-market hormones. She frequented eviction watch meetings, looking to meet others with an interest in finding a building to squat in.

Over the last decade, as real estate values have increased in Manhattan, squatting has come to an impasse: Integrate or be eradicated. The police and squatters have long been at odds. Meow recalls a stalemate in which the inhabitants of the Umbrella House enclosed themselves for two days by cementing doorways shut while riot cops waited outside.

“They could have easily plowed right through our barricade and removed us like they had done to others before,” Meow says, referring to evictions at 541 and 545 East 13th Street, where squatters were kicked out in the middle of the night and looked on as their buildings were demolished. “I had a sign in my window that said “I’m willing to die for my home, how about you?” she says. Meow attributes the end of the standoff to a call she placed to Howard Stern—by then a friend of hers—about the incident. “I knew he knew [former Mayor Edward] Koch and might pull some strings for us,” she said.

Much to the surprise of the squatter community, the Giuliani administration decided in 2001 that the city would compromise, and the Urban Homesteading Assistance Board (UHAB) approached each building to broker agreements. For most squatters it was an offer they couldn’t refuse. Today, 11 of the 12 remaining squats are involved in the deal that will allow them to own their apartments. UHAB is overseeing construction work that will bring each of the 11 buildings up to code, and the squatters will become owners in exchange for a monthly maintenance fee to cover home improvement loans. There are restrictions on resale, making the apartments strictly available to lower-income households. But the buildings will become cooperatives, maintaining the community the squatters have forged.

After UHAB’s symbolic purchase of the 11 buildings for $1 each was announced, The New York Post was quick to denounce the move as “despicable,” saying, essentially, the squatters didn’t deserve to get something for nothing. But City Councilwoman Margarita Lopez and others have argued that salvaging these buildings was purposeful, resulting in affordable housing for nearly 240 individuals. “The residents are a diverse group of people, but what they have in common is a history of putting in long hours of physical labor into reclaiming abandoned homes and making them livable,” says Joe Center, Associate Director of UHAB.

Squatters like to call that physical labor “sweat equity.” I ask Meow about her experience making the Umbrella House more livable. “It was a true ruin,” she says, reminiscing. “We had to go up the fire escape to get to other floors. One of the first projects I spearheaded was to make stairs. The sidewalk at Avenue A and St. Mark’s [Place] was being ripped up and there was all this rebar that we took and cut and laid cement over.”

Another project was to fix the sewer line, which residents completed without permission from the city, over the course of a weekend. “The city told us we couldn’t block traffic on Avenue C with the hole we made so that we could have direct access to the line,” she says. “So we covered the hole with plywood and then dug through our basement all the way to the line, working 24 hours a day in 12 hour shifts until the line was fixed. I’m surprised nobody died because every time a car passed over us rocks and debris would fall down on whoever was in the crawl space.”

Meow is receiving disability checks for injuries incurred while working on the Umbrella House. She takes multiple pills daily, including painkillers and arthritis medication— in addition to her regular cocktail of estrogen and progesterone. When we first met, she was recovering from the final stage of her sex-change surgery, the labioplasty. The first stage of surgery was the vaginoplasty, which involves the inversion of the penis to create a vagina. The labioplasty then created the labia minora, “that hood over the clitoris,” Meow explains. “Before the clitoris was just exposed.”

Meow speaks about her experience in a kind of evangelical way—as though she’s educating one person at a time. She has been a regular on The Howard Stern Show since 1986. On October 10, she “lost her virginity” as a woman on the show, filmed in the act. She describes the stunt as a way to bring her sexuality into the public eye.

Meow believes she was always a woman, but the physical manifestation of this has brought with it new difficulties. “Straight guys can’t handle the fact that I was a man. It’s like being a burn victim. Are they really getting dates?” To Meow, her experience on Howard Stern was worth it for the sex, even though it only lasted a minute before, she says, the john “lost his erection.”

“Women have it the best,” she says. “Men don’t know what they are missing because the feminine orgasm can happen in two places. If men only knew how good it was, they’d be lining up for surgery.”

Meow welcomes me into her home after each of our two meetings, so I can socialize with her cat family and see the building’s progress. According to UHAB, 21-23 Avenue C is the closest of the 11 homesteaded buildings to finishing renovations. Meow’s apartment still maintains the stark quality of a place in transition—but the cats look right at home. There are multiple carpeted cat perches in the living room, cat paraphernalia (like a hanging rope Meow made to encourage play), and cat memorabilia (like a metal cat sculpture). There is minimal furniture for humans; a dresser and a bed that doubles as a place of cat repose crowd the bedroom. There is a television inside a cat cage (“Otherwise they’ll pee on it”) and feral and disorderly cats are separated from the bunch in cages or the second bedroom, where a painting by Dee Dee Ramone of The Ramones hangs, which Meow says was painted just for her.

Meow still doesn’t have a functional kitchen and usually eats at Odessa on Avenue A. In the kitchen’s place are multiple litter boxes and the hovering scent of ammonia. The building’s tenants used to share a bathroom and communal shower, but now Meow has a functioning bathtub and toilet in a sectioned off area of her living room, awaiting a separating wall. After 18 years without it, she now has heating.

Meow, like her cats, has marked her territory. Despite differences of opinion with other tenants and with UHAB, she expects to remain in the niche she carved out for herself. “I just wanted a white picket fence and a lawn like everybody else,” she says. “But this is what I got, and it’s my home.”

The Fall’s previous studio album, Sub-Lingual Tablets, ends with guitar lashed diatribes against Facebook and iPhones, and the first cut on New Facts Emerge is “Segue”—so what’s the target this time?