Last October, Marxist agit-rappers the Coup headlined a show at Southpaw that also included Livesavas, Tom Morello, and an unsigned band that I’d never heard of called Outernational. I went expressly to see the Coup, but every act proved to be thrilling: Morello, in his Guthrie-esque “Nightwatchman” guise, is a forceful acoustic gee-tar strummer, interesting lyricist, and—swear to God—impassioned singer; Livesavas were funny and warm and plenty loud; and the Coup’s Boots Riley was a shot of pure energy, resplendent in a chocolate-brown suit and luxuriously large Afro. 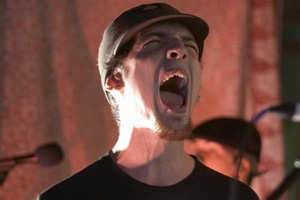 But the band I had never heard of before was the night’s biggest revelation. Stirring together hip-hop, punk, reggae, ska, afrobeat, and bhangra—genres that trumpeter/vocalist Sonny Suchdev astutely pegs as “rebel musics”—Outernational decisively brought the funk. The set peaked with the dhol-driven “Her Word on Me,” but every song was distinct, tight, and memorable. Most crucially, as the songforms careened from the hardcore-inflected pop of “Ricochet” to the rock anthem-ism of “From the Future” (in which Suchdev chants “This is not my country/It’s not for me” over and over until the words sink in), the tempo never flagged. Standing in the front row, leaning on the stage, I was so entranced by the music that I didn’t even notice when none other than George W. Bush sailed over my head and into the crowd, whereupon he was terminated with extreme prejudice: ripped to shreds, stomped, kicked—the whole bit. “Yeah, that was pretty intense,” Suchdev said later.

The “Bush” in question, of course, wasn’t the real thing. (Would that we had a stage-diving president.) It was just an effigy that the band and a few of their fans had crafted from balled-up newspapers and an empty suit before the show. See, Outernational, in case you haven’t sussed it out already, are a “political” band. I know, I know: It’s an absurdly broad label, one that could refer to everything from the facile Bush-is-bad whining of mindless American mallrats to the dull, liberal platitudes of “conscious” rappers. But Outernational are the real deal—genuinely committed to direct action, protest, and uniting and mobilizing massive, diverse groups of people under a common goal. They’re “cultural workers” in the Marxist sense, using rock music’s immediacy and power to raise a common consciousness, with the ultimate goal of, well, “changing the culture and transforming the world,” according to lead singer Miles Solay. “The world can be a whole different way…the future could be so much better.” 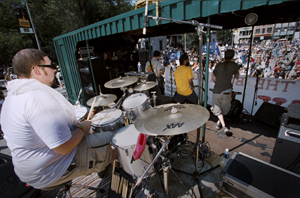 Suchdev invokes another musical/political inspiration in elucidating Outernational’s radical mission: “We’re trying, through our music, to call out the injustices of the world—raging against the machine, for lack of a better term.” And then he does come up with a better term—“truth-telling.” After all, in Bush-era U.S.A., simply telling the truth can be a revolutionary act.

It is appropriate, then, that Solay and bassist Jesse Williams first conceived Outernational during the Bush administration’s deceitful rush to war with Iraq. The group’s current lineup, however (Solay, Suchdev, and Williams, plus guitarist Leo Mintek and drummer Alex Garcia), wasn’t fully established until August 2004&mdashjust in time for the Republican National Convention. Outernational played their third show ever at a Not in Our Name rally in Union Square in front of a drive-out-the-Bush-regime crowd of five or six or maybe even eight thousand demonstrators, depending on which band member you ask. At any rate, it was a far bigger crowd than most bands play for at their third gig. “We hit the ground running,” Solay says. They’ve since gone on to perform at Critical Mass gatherings, union rallies, and antiwar marches; back in March, they kicked off the immigrants’ rights demonstration that drew more than 100,000 protesters to City Hall.

Outernational has played more conventional venues too, mostly local (CB’s, the Knitting Factory). But they’ve also done a handful of dates up the East Coast, in Canada, and even in L.A., where they played a show at the Key Club in Hollywood. Most of their L.A. time was spent in the studio, though, recording a pair of songs with Tom Morello—the punchy “For It All Now” and the anthemic “Arise,” which Solay describes as “our ‘Ohio,’” referring to the Crosby, Stills, Nash, and Young classic. The band plans to include those songs on the album they’ll record this fall, also with Morello.

For such a young group, Outernational have accrued a solid and devoted fan base, mostly on the basis of those local live shows. (MySpace has also helped: “We’ve got a lot of friends,” Solay says, tongue ever so slightly in cheek.) Indeed, the band’s debut studio EP, produced by Eugene Hutz of the great Balkan gypsy-punk nonet Gogol Bordello, recently sold out of its initial pressing. “We’re very much building up a following,” Suchdev told me shortly after the band returned from a warmly received North Carolina–Virginia-Ohio Warped Tour jaunt.

Now, I’m sure this has happened to everyone. You catch an unexpectedly great live show by a band you’ve never heard of, you hype said band to all your friends, drag them along to see them the next time they’re in town, and…the band sucks, leaving you disappointed and bewildered and forcing your friends to question your taste in music. (“Poor taste in music” being an absolutely valid reason to terminate a friendship if you are between the ages of 12 and 28.) I have good taste, and after seeing Outernational at Southpaw back in October, I came away pretty certain that I had seen a special band. But, with the above scenario in mind, I decided I should probably see them again before publicly tooting their horn.

When I met up with Solay and Williams this past April, they told me that the Southpaw gig that so entranced me was, amazingly, an off night for the band: “We took too much time but played too fast,” Solay said, adding, “We’re three times better now.” I’ve never been too hot with my times-tables, so I can’t officially vouch for that. But they’ve definitely improved, and at Irving Plaza in July they were fucking great: markedly more confident, punked-up, and rhythmically energetic than at the Southpaw gig. Here, the wiry Solay was in constant motion, running in place with a sneer on his kisser and his hand raised to his head in faux-military salute, while his counterpart, Suchdev, stared wide-eyed into the crowd as he sang his hooks and wailed his trumpet riffs. Newer songs such as “For It All Now” boasted gorgeous, unforgivingly hard beats, and the older stuff (“Que Queremos” and “From the Future” especially) inspired actual prolonged moshing, first time I’ve seen that happen in years.

Solay claims Rage Against the Machine as one of his biggest influences. “They created a tremendous amount of oxygen—just room to breathe,” he said. “They were a whole other planet, with its own gravitational pull.” That’s all well and good—and Solay’s lyrical slogans are definitely de la Rocha–esque&mdashbut musically, I hear far more Clash than Rage. Outernational are more pop-friendly than Rage ever deigned to be, and less doctrinaire too, thank God. (Each band member claims a slightly different personal ideology—here a socialist, there an anarchist, but everywhere a leftist.) They’re not as obvious about their Clash-ness as, say, Rancid, but Outernational’s twin-vocal attack, mashed-up rhythms, and good old-fashioned musicianship all strongly evoke Strummer and Co.

Obviously that’s no mean feat. Nor is it unintentional. When I met up with Solay and Williams at Union Square a few months back, one of the first things Solay said was, “I want to see the Joe Strummer mural.” So the three of us walked down to Tompkins Square Park, talking about our favorite Clash albums, and when we reached our destination, we stood there silent for a second, taking it in. I had never bothered to actually look at it before; it’s pretty cool. “Know your rights!” it says along the bottom in big gold letters. And, in smaller print, tucked in the corner, what might as well be Outernational’s slogan: “The future is unwritten.”

A listener is well-advised to approach the band's offerings as de facto political statements, performative partnerships that represent models for how the world might realistically embrace otherness, transcending the perennial drive for national, political, and psychological borders.

Joan Miró: Birth of the World

The Birth of the World hangs centrally in the first of the two galleries that comprise the show, positioned as the painting where Miró broke with the style of his earlier work.

Jane Freilicher: Parts of a World

Freilicher, a quietly brilliant painter of interiors, is represented here with 15 still lifes that show the full spectrum of her work from the 1950s to the early 2000s. The muted hues of her paintings, combined with a high lyricism for which she was known from the beginning of her career, invests her work with a poetics that can only be admired, on both a thematic and a technical level.