It’s not easy to describe the buzz you catch off the music that James Angell cooks up. I’m not referring to industry buzz, because up until recently the music business has had their collective blinders on regarding Angell’s mesmerizing brand of classically influenced lounge rock. I’m talking about what happens to your synapses when you press PLAY and you’re led into his lush and idiosyncratic world. 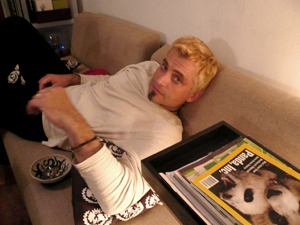 Raised by a Baptist minister on the outskirts of Portland, Oregon, Angell learned to play piano and sing as a child in church; he was fed a steady diet of classical music, hymns, the Columbia House Record Club, and—of all things—the soundtrack to Ben Hur. Angell’s music has become a strangely melodic blend of Sinatra, Prince, Johann Sebastian Bach, and Leonard Cohen that is just as gripping live as it is on record. You feel as though you’ve heard these sounds before, but you’re not sure if it was in a dream or in the dentist’s chair, tripping on nitrous oxide.

I caught up with Angell in New York City in early autumn, while he was in town for talks with the newly formed Dream Makers label, and got a preview of his upcoming double album, The Pandemic Symphony. With the looming prospect of having proper support for his eighteen-song record, and with the follow-up already in the works, his enthusiasm was palpable. In a baffling case of major-label ineptitude, Capitol Records had passed on his brilliant first album, Private Player—a finished record that merely needed releasing—with no real explanation. A trend-obsessed, risk-aversive music industry just couldn’t seem to comprehend what to do with him. He wasn’t easily categorizable; all he managed to be was a wildly talented singer/songwriter with piano-driven tunes that veered into narcotic variations on the pop song with a sweetness that resists the trap of cynicism. That first record did build a small but loyal following, however. Courtney Taylor-Taylor, Angell’s onetime drummer and now leader of the Dandy Warhols, was so smitten that he passed it along to David Bowie, who liked it so much that he called Angell at home to praise his work. John Taylor of Duran Duran saw Angell play a solo piano show and volunteered to play bass for him for a few gigs. Yet, still no record deal.

Aside from a modest distribution deal with Portland’s very independent Psycheclectic Records, Angell has been forced to make things happen on his own. From building a cottage for his wife and daughter with his own hands to recording in his kitchen and his friends’ basements, he has not permitted the absence of financial support to hinder his process. “I don’t ever want to be jaded” he tells me. With help from some friends, who also happen to be local veteran musicians (including Tony Lash of Heatmiser; Eric Matthews; former bandmate Tod Morrisey; Daniel Riddle of King Black Acid; and Steve Hanford from Poison Idea) and family members (brother Theo and ten-year-old daughter Astrid) he has made his music on his own terms, largely funded by working as a carpenter. “I only knew [that] if I could finish this music it would save my life,” he confesses.

In a twist of irony for one of the rare musicians who don’t cite the Beatles as a primary influence, Angell was ultimately led to his first significant record deal by none other than Sir Paul McCartney. The director of McCartney’s charitable Garland Appeal cancer research project heard “Ooh Love,” from Private Player (Angell’s moody exploration of relationship struggles and hope), and brought it to Paul, who thought it was extraordinary and agreed that they should use it for one of their charity albums. Unfortunately, the next one was a Nashville record, so Angell’s track was put on ice. Several years later that same man, Dennis D’Amico, became the head of the Dream Makers label and made the signing of Angell a priority. “I’ve been in the music business for thirty-five years and I can honestly say I’ve never heard anyone like him,” D’Amico says. He’s also given Angell access to the label’s state-of-the-art Barbershop Studios, in Lake Hoptacong, N.J., and engineer Jason Cosaro, who has worked with artists ranging from Motõrhead to Madonna. D’Amico told me that the label “is out to change the model that has been so anti-artist, and create an environment where everyone can make a living”—not the kind of treatment that Angell has come to expect in his previous twenty years working as a musician.

Like his fellow Portlander the late Elliott Smith, Angell was in a rock band (Nero’s Rome) in the fertile Northwest music scene in the nineties, but he never quite found his footing, or couldn’t find his organic voice through all the distorted guitars. Among the hard truths about life in a touring group, however, he did learn the art of collaboration and “figured out where the melody lives in the music.” In the end, he and Smith both dissolved their bands and headed off to find the core of themselves musically. Smith left Heatmiser and stripped it all down to acoustic guitar and vocals. Angell went off to the woods and rediscovered his upright piano.

In the nineties, Nero’s Rome flirted with major labels, put albums out on local indie labels and, after near–major label signings fell through twice, finally drove off the road and abandoned the vehicle. James quit the music scene and went off with his wife Erin to raise their daughter. Then he disappeared into the dark channels of his mind to try to figure out the next path to take. He dusted off the piano and started poking the keys a little until he felt a spark. He realized that standing up on stage in front of a band clutching a microphone stand was not his true calling. He went back to work on his music and soon began to assemble musicians to help him flesh out his new vision. The result was Private Player, a record that The New Yorker called “ambitious orchestral psychedelia.”

The finished songs on the new album defy categorization, as usual. That is not to say that they aren’t accessible&mdashthey’re just not like anything else you know. “The Horse that No One Could Ride” sounds like an up-tempo western chase number churned out in some sort of psychedelic Dodge City saloon, with ghostly voices drifting through the mix and Angell as a raspy-throated messenger of doom. As a singer, Angell moves without effort from smoky growl to playful falsetto, sometimes within the same track. “Good Girl” has the sexy groove of a mid-tempo Prince track with a penetrating guitar line. “The Ballad of Richard and Liz” is “Who’s Afraid of Virginia Woolf” set to a quirky waltz. There is so much going on within the framework of each song that Angell himself likens his music to “a mobile,” “a party conversation,” “a Rubik’s Cube,” or the drawings of M. C. Escher. His greatest influence, however, is Bach’s fugues: The concept of four separate melodies operating at the same time has become a through-line for him musically.

Lyrically, every song tells a tale that seems to be dark yet whimsical on some perverse level. On The Pandemic Symphony, the themes tend to roam further beyond the bedside and out into the universe. During a particularly dark period in his life Angell started thinking about the human race as “a virus” or as a “pandemic” that was destroying the planet. Upon further research he discovered that pandemic in Latin means “of the people.” So, in a way, it’s a soundtrack and indictment of human behavior in the twenty-first century. Another new song talks about coming to NYC after 9/11 to find his “long-lost brother.” In the propulsive, surging track he intones, “If you ain’t afraid to commit suicide—you can do anything you wanna do”—which is a comment not only on the horrors of modern warfare but on his career. If he’s not beholden to any special interest, there’s nothing stopping him from making the kinds of records that he wants to make. If he can build a house, he can make a record.

Over the last decade, Portland, Oregon, has become a hotbed for contemporary music—you’ve no doubt heard of the Decemberists, Pink Martini, Dead Moon, the Shins, Sleater-Kinney, and Stephen Malkmus. As the most imaginative and compelling of the Portland artists, James Angell has been flying mysteriously under the radar for the last decade. His resonant voice and colorfully orchestrated music have allowed him to carve out his own niche in the Pacific Northwest, but he has remained a well-kept secret elsewhere. Hard at work on his second solo album, with his third one already written in his head, record deal in hand at long last, this should be changing like a door kicked open.

This book allows one to read with as much freedom as one listens to a playlist, in sequence or on shuffle. Read it as a playlist, or as any artwork that is drawn from the stuff of life, discover the biography revealed at its edges and interpret it as a portrait, a diary, or a letter from John Ashbery.