In the opening movement of Beyond Hell, the metal-opera/concept album that is GWAR’s newest offering, Oderus Urungus watches “unconcernedly” as the band’s secret Antarctic Fortress is approached by a “mass of evil-looking sky machines. Emblazoned with the symbols of the new gods, this gleaming horde of techno-death marks their passage with a solid carpet of continually detonating nuclear weapons,” dispatched by the “Nazi Pope.” Oderus takes a brief, faux-Shakespearean soliloquy, then the band launches into “War Is All We Know,” a powerful opener—hard, fast, metal; bleak and violent lyrics. But late in the song Oderus makes a curious admission: “When I said I loved war I lied/It fucking sucks on the losing side.” 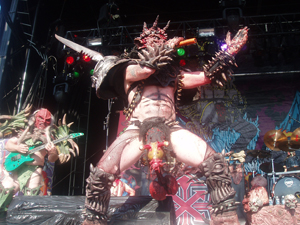 Pan-galactic warlords created from the basest material in the universe.

GWAR are a band of pan-galactic warlords created from the basest material in the universe. They came to earth, the mythology goes, to sexually enslave and recklessly slaughter the human race, to which end they set up their very un-Superman-like home base at Antarctica. What has prevented them from fulfilling their goals is unclear, but one suspects it has to do with their constantly being drugged out of their skulls, and their fondness for extreme scatology, which, of course, requires living creatures for at least one disgusting reason.

Though their gory exploits may unsettle or repulse most people—Bataille wouldn’t testify for the defense at their obscenity trial; De Sade might—there’s no question that they can tell a story. Musically, their playing has developed over the years from merely competent to skilled to superior. After smuggling funk onto 1994’s This Toilet Earth, they began to experiment with other, less likely styles, such as country, punk, and jazz. Though the band has disavowed this period as their low-water mark, I personally count 1997’s Carnival of Chaos and 1999’s We Kill Everything as two of my favorite GWAR records. From the hyperactive and unabashedly silly “Penguin Attack,” which opens Carnival, to the endearingly perverse barnburner “Fucking an Animal,” which closes out We Kill Everything, these two innovative albums are a lot of nasty fun. Still, most fans were thrilled when the band announced a “return” to form in 2001, and then made good on the promise with the decidedly non-experimental Violence Has Arrived. The title, in retrospect, seems an oddly prescient one for a freshly post-9/11 world (it came out that November), and I’m given to wonder if this was an oblique reference to the event.

GWAR has been slipping (or else slamming) politics into their music for years, at least as far back as “Ollie North,” off 1988’s Hell-O. The short, messy barrage of regrettable homophobic epithets which constitute the lyrics don’t communicate much more than their disdain for North; it would take a particularly indulgent person to call them a commentary. By 1991 the band had refined (I use the word advisedly) their political-satirical technique. America Must Be Destroyed, contains some of their all-time most disturbing material; it also introduces GWAR’s arch-enemies, the Morality Squad. A cartoonish parody (but everything in GWAR world is cartoonish—writ large in bodily fluids) of the censorship movement in general (PMRC and PARENTAL ADVISORY stickers were hot-button issues at this time) and the Christian Right in particular, the Morality Squad is led by Edna P. Granbo, who starts off her song off by claiming “We’re the morality squad/Armed with the wrath of God…Freedom to all the people/Unless I think you’re wrong.” Edna accuses GWAR of being “even grosser than 2 Live Crew” (in fairness, this is true) and unleashes her grandson, Corporal Punishment, “a superhero/Just back from the war in Iraq.”

Needless to say, GWAR defeats the Squad, and one wonders if the singer of “Back to Iraq,” on Carnival of Chaos, isn’t the Corporal, brought low in the intervening years. “Back to Iraq” begins “We was part of the slaughter they called Desert Storm/We maimed and we murdered/In the name of ‘Norm.’” Later in the song, the disenfranchised veteran sings “I did my duty—I served my nation/Now I can’t even afford medication.”

At their best, GWAR play a role not unlike that of a Fool in a Shakespeare play. Because they are sworn enemies of all life, they extol the virtues of anyone who promotes violence or spreads misery and, as such, they have found a natural ally in the current administration. 2005 saw the most overtly political addition to their catalogue, as well to their evolving mythology. War Party is their most brutal record, lyrically and musically. The opener, “Bring Back the Bomb,” starts so suddenly and ferociously that you feel like you’ve turned a street corner and stumbled into a riot. Oderus screams his way through a long list of reasons that nuclear destruction is not only inevitable, but ideal. “What makes it so wrong?” he asks, with all the innocence that you’d expect from murderous drug-addled Hellspawn. The song builds toward a juxtaposition of the chanted chorus, “Bring back the bomb,” with Christ’s “They know not what they do.” Then, “Krosstika” describes the merging of the “two great hates” to create a new emblem for the War Party. “Chaos Rules Forevermore,” Oderus proclaims in “Decay of Grandeur,” but is immediately corrected by a troll named the Bonesnapper, who explains that “the human race is the only X factor.” The title track, certainly the album’s thesis statement, makes explicit reference to Abu Ghraib and the public desecration of the bodies of four American contractors murdered in Iraq, before posing this rhetorical question: “You did your job with skill, you raped and you killed/Why so surprised that you finally got billed?”

War Party is a merciless album. At thirty-eight minutes, it is one of their shortest, and none of that time is spent on exposition or comedy. Other highlights from this album include the unapologetic we’re-glad-you’re-dead sentiment of “The Reaganator” and “You Can’t Kill Terror,” wherein Oderus waxes ecstatic on the fact that since terror is a concept, and therefore fundamentally unkillable, he is looking forward to an eternity of failed attempts to eradicate it, and delighting in the eradication of everything else along the way.

Compared to its predecessor, Beyond Hell is downright playful. Musically, the band is still in strict metal form, so don’t expect anything like “The Road Behind,” a relatively mild-mannered anthem (though it still involved the destruction of ten thousand planets) that was their only MTV single. As characters, however, and in terms of story, the GWAR of Beyond Hell seem less the globocidal cheerleaders of War Party than the “bumbling antiheroes” of We Kill Everything.

The songs on Beyond Hell detail GWAR’s descent into Hell to fight Satan, and whatever else they find, mostly because they’re bored with tormenting the surface world. They have a series of adventures before figuring out that “the only way to triumph in this coming idiocy is to become...Tormentor." Onward, then, on this anti-heroes’ quest, “into a realm of nothing but pus and vinegar, and great islands of rotting crabmeat dotted with laundromats.” In this region is “Eighth Lock,” a special prison where “the worst of Hell’s offenders are tormented even more.” In a last-ditch effort to slow GWAR’s assault on Hell, the prison’s gates are opened and the damned sent into battle; all are subsequently slaughtered, then “the ranks of Hell split asunder and GWAR is confronted with a figure from their past, Stubbles McGillicutty, the publisher of Metal Brick, the most pathetic fanzine ever produced.” The next song, “The Ultimate Bohab” (Bohab is a derogatory term GWAR uses to describe their fans), takes up the theme of Eminem’s “Stan,” scrubs it free of any redeeming value, and shoots it into the sun. If nothing else, it makes an interesting dialectical pair with the next song, “Destroyed,” wherein GWAR have to fight the Demon of Rock—an addictive, lustful, violent creature whom GWAR identify as an enemy because he is very similar to them and they don’t know how to make friends.

Just in case there is anyone out there worried about having the story of Beyond Hell spoiled for them, I won’t discuss the grand finale, but the twelfth and final track is not part of the story proper. It is a spirited cover of Alice Cooper’s “School’s Out” with some original lyrics (“I never went to school/If I did I would have majored in killing”). While it’s probably no coincidence that this album, less focused and unequivocally grim than War Party, also isn’t as good as that record, it is by no means a failed effort on GWAR’s part. Beyond Hell may just need time to fester in—er, grow on—me, as was the case with Violence Has Arrived. At any rate, a new album means a tour, and a GWAR performance has to be experienced to be believed. They are the highest-energy band I’ve ever seen. Their stage show, like their music, will impress anyone who can stomach it. And, if you still aren’t won over, just try to remember that they hate you and would have killed you already if they thought you’d make a half-decent meal.

Justin Taylor is a freelance writer based in New York City.