In 1962, when Kevin Walsh was six years old, all of the lampposts suddenly vanished from his block of Sixth Avenue in Bay Ridge. The Department of Transportation was in the process of replacing the elegantly designed cast—iron posts with a generic, goose—necked modern version. “I woke up one day, and all the classics were gone,” Walsh says. “Of course, I was a little kid then, and time doesn’t pass for little kids the way it does for adults. But seemingly, it happened overnight.” 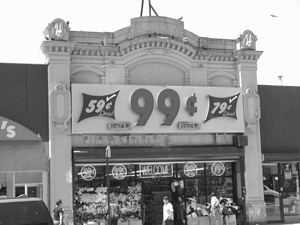 Not long after the lampposts disappeared, construction workers razed entire streets near Walsh’s home to build on—ramps to the Verrazano—Narrows Bridge. These childhood events kindled in Walsh an insatiable obsession with the artifacts of a constantly changing New York.

Walsh has spent much of his life making an encyclopedic mental map of the remnants that have somehow escaped—often out of luck or neglect—New York’s relentless urge to tear down the old in favor of new development. Seven years ago he created a web site, Forgotten–NY.com, which has grown to more than 500 pages that meticulously document the abandoned subway stations, trolley tracks, neon signs, hand–lettered advertisements, alleys and, of course, lampposts in just about every neighborhood in every borough.

His first book, Forgotten New York: The Ultimate Urban Explorer’s Guide to All Five Boroughs, published this fall, collects the most unusual and compelling of these observations in guidebook form. Anyone with even a mild interest in New York City history—or who would like to see first—hand these “non sequitur flashes of the past,” as Walsh calls them—could easily lose hours in his book or on his site.

Walsh isn’t resistant to all change. (He was awed by the completed Verrazano—Narrows Bridge, and recalls that his family rode the first bus to cross it when it opened in 1964.) But he is disheartened by the “blanding out” of neighborhoods through careless and uncompromising development.

“Gradually, neighborhoods are losing their own distinctive characters, and they’re all becoming copies of each other,” he says in an accent that seems thoroughly New York, yet more borough—neutral than Brooklynese.

“A lot of neighborhoods have buildings that have been there for a long time, for decades. These buildings don’t look exactly the same, but they’re from the same era. And what happens is that developers come in, and they say, ‘Well, we don’t want this anymore. We want multi—family units.’ And they pick off the old buildings, one by one, and put up these cheap brick boxes, with paved—over front yards, and identical Fedders air conditioners under every window, and it looks awful. It’s terrible, and I don’t see anybody in the city really saying anything about it.”

Take Red Hook, a neighborhood that Walsh has documented down to the unusual semicircles of block—paving stones on Van Dyke Street. The enormous Ikea under construction (which will soon join the city’s largest Fairway) may erode the neighborhood’s character, embodied by the crowds that come to Red Hook Park every weekend, he says. “You got everybody in the neighborhood in Red Hook Park, thousands of people,” Walsh says. “You got those huge soccer fields and a block full of food. And everybody’s having a great time. You go to Ikea, and it’s sort of freeze—dried. It’s very corporate and very sterile. And that could happen to Red Hook. It’s all going to be blue and yellow.”

Or consider the $1 billion proposal to revive Coney Island, which Walsh cites as an example of a missed opportunity to do development right. Joe Sitt, the real—estate mogul and chairman of Thor Equities, is campaigning for a project that would remove traditional amusements to add high—rise condos, a luxury hotel and a shopping center. (As previously reported in the Rail, Sitt has purchased about $100 million of property in the neighborhood, but any possible construction is still more than a year away.) Ruby’s Bar on the boardwalk, one of the city’s most beloved and gentrification—resistant dives, might wind up inside a mall if it survives.

“They’re going to remove a lot of things that made Coney Island Coney Island for the past several decades, and make it into a mini—Disneyland, if they get their way,” Walsh says. “There are some parts of Coney Island that ought to be built. There are whole empty stretches that are used to park school buses—you could do a lot with that. Just don’t put Fedders—type buildings there. Make it part of Coney Island.” What would he suggest? “Put a movie theater in there. The ball game gets out around 9 o’clock, people could see a movie. What about a drive–in?”

But Walsh says he is an observer, not an activist. His book and site celebrate what remains, like one of the last humpbacked street signs (Fort Greene), rare Spanish bricks (Sunset Part), the first co—op apartment building (Finnish, and also in Sunset Part), and possibly the city’s only sidewalk made with cut wooden blocks (Greenpoint).

Walsh works as an editor and proofreader by day. The web site occupies the bulk of his free time. In the evenings, he writes in his Flushing apartment. An informal network of Forgotten New York fans contribute the occasional guest page or take research journeys of their own—like the crew that recently set out in a rowboat to photograph the remains of a yellow submarine in Coney Island Creek.

Several times a year, Walsh hosts sold—out tours of places far off any tourist path, and unfamiliar to many New Yorkers, such as South Jamaica, Parkchester and New Brighton. He will often sit down with one of his maps and chart a new area to explore. Surprisingly, there are still some neighborhoods he hasn’t seen. He’s ventured to Hunt’s Point only once, and doesn’t know his way around Spanish Harlem. He travels only by subway, bus and on foot, and in many ways his life resembles his childhood days in Bay Ridge, when he began taking bicycle expeditions around Brooklyn.

Walsh has discovered one drawback to posting his observations on the web site: occasionally, and just as mysteriously as those early lampposts, an architectural or historical detail disappears. “I have a feeling that some people at the Department of Transportation actually go to Forgotten New York to find out where all the nonstandard stuff is so they can get rid of it,” he says. “Maybe I’m ascribing too much importance to myself. But whenever I discover something that’s nonstandard, and I photograph it, a few months later I’ll come back, and it’s not there anymore.”

That hasn’t stopped him from documenting these artifacts. “I’ve come to appreciate all things that are obscure or hidden. I’m trying to draw attention to them, so that others could appreciate them,” he says, adding, “Perhaps they’ll see to it that things could stay where they are.”

Jen Itzenson is a writer who lives in New York.

On September 1, 1966, a Brazilian-Swedish artist who has been living in New York for five years stages a performance on Fifth Avenue that involves himself, his wife and several friends carrying placards bearing enormous headshots of two famous figures, the American comedian Bob Hope and the Chinese leader Mao Tse Tung. In January of that year, Bob Hope’s “Vietnam Christmas Show” had aired on NBC. In May, Mao had launched the Cultural Revolution. As part of the performance, which is also filmed, a radio journalist asks spectators on Fifth Avenue if they are happy