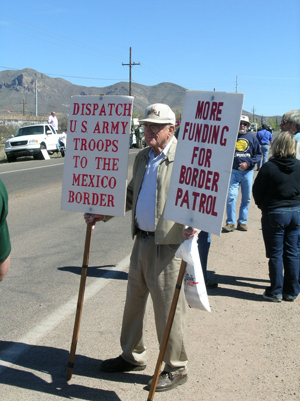 Say what you will about the Minutemen, that small band of border-patrolling activists, but you’ve got to admire their knack at staging compelling political theater. Last April they launched a volunteer citizen campaign in Arizona along the border, spotting migrants and “doing the job the government refuses to do.” Hordes of international media came along for the ride, covering their every movement.

On the ground, the campaign was a bust: migrants simply avoided the area and volunteers spent most of their hours charring under the sun as they looked through binoculars into an empty desert. But it was brilliant PR. Fewer than 200 people sitting on lawn chairs became newsworthy, and even the Pope’s passing didn’t bump them from the top of the news cycle for very long.

When Minutemen founder Jim Gilchrist brought his message to Columbia University recently, courtesy of the College Republicans, he didn’t have to worry about dramatic backdrops like border fences or nighttime operations—all he needed was a group of screaming students, who graciously obliged. Inside Columbia’s Roone Arledge Auditorium on the evening of the event, the first person to speak is Marvin Stewart, a black man who identifies himself as a Minutemen board member and an “ambassador for Christ.” Stewart stays on message for about 30 seconds, labeling the enemy as those “Communist reconquistas” that want to reclaim parts of the U.S. for Mexico. The audience roars its predictable displeasure, and it looks like a good-old-fashioned shouting match will be underway.

But Stewart then launches into an indecipherable lecture, citing, “God’s sovereign authority over this nation,” the U.S. Constitution, the Declaration of Independence and so on. By the time he starts reading sections of the California State Constitution—apparently at random—the audience is tired. “Wrap it up!” they begin to chant, though Stewart does anything but, instead choosing to continue on and add to the din. It is apparent that whoever set up the microphone stands in the aisles for Q & A has been wildly optimistic.

Thirty minutes into his rant, Stewart is finally convinced by Gilchrist to step down. Jeers greet Gilchrist, who doesn’t make things any better by walking over to Stewart and giving him a manly hug, then asking, as if the overture wasn’t obvious enough, “And they’re calling us racist?”

A person in the crowd yells out something to the effect that the Minutemen have hunted down and killed 3,000 immigrants on the border. Gilchrist tells the crowd that such a comment is ridiculous, but many in the crowd, judging by their howls, don’t seem to be buying it. (3,000 hunted down? I spent a week on the border living with the Minutemen, and can sum up the project in one word: boring. The only hunting going on was for a stronger sunscreen.)

“I know you hate yourself,” Gilchrist continues over the yells, adding ungrammatically that the folks in front of him are “the biggest group of social maladroits” he has ever seen. “You’ll graduate and become investment bankers,” he promises. He only has the chance to utter a few more lines before a group of students emerge on the stage with a banner that reads “No One is Illegal” in English, Spanish and Arabic. Gilchrist seems amused, until people start rushing the stage. In the melee that ensues it is difficult to discern who is doing what to whom, but video footage from the Spanish television channel Univision clearly captures one of the Minutemen supporters, wearing a white t-shirt and blue cap, kicking a student in the head. After several minutes of craziness, security manages to regain some semblance of control, and Gilchrist walks back on stage with several others (including the kicker) and loudly recites the Pledge of Allegiance, ending with a military salute. Meanwhile, students below the stage start up another round of chants, labeling Gilchrist, among other things, a racist, fascist, KKK member.

Escorted out by security, groups of Columbia students gather in the lobby, giving each other high-fives and grinning ear-to-ear; I feel like I have stumbled into a football locker room just after winning the state championship. The adrenaline factor is a bit much, so I wander out into the rainy evening, where students are positing at high volume that “This is what democracy looks like!” The statement seems delusional if their audience is the public-at-large: “Democracy Takes Over at Columbia!” seems the least likely headline one will read the next morning.

Act II occurs three days later, with the curtain opening in front of the Mexican Consulate as two-dozen people gather to protest what event organizer Paul Streitz characterizes as the “Mexican government’s active encouragement of illegal immigration.” Streitz, who works as a market researcher in Manhattan and lives in Darien, Connecticut, is the head of Connecticut Citizens for Immigration Control, one of several participating groups. He also runs draftbuchanan2008.com, and hopes that a groundswell of anger over illegal immigration nudges Buchanan into the fray.

“At this point, with Bush failing to secure our borders, there are plenty of people that believe he would make a strong leader,” Streitz tries to convince me.

To the right of the consulate’s front door—which is closed, this being Saturday—stand immigration control activists from New York, New Jersey and Connecticut. Included within their mix is the head-kicker from Columbia, who is thankfully restrained by the waist-high metal fencing that the police have laid out. To the left is another pen, not more than 10 feet away, which contains the anti-Minutemen, numbering about 50. In addition to these antagonists and protagonists, depending on who’s doing the describing, there is a new cast of supporting role players—New York City cops—who field by far the most diverse team of the bunch (their 10-person squad includes latinos, asians, blacks and whites).

Wandering around the perimeter of the protest with a digital camera is Jason Megill, who grew up in Iowa and came to New York City after graduating from the University of Virginia. Tufts of blond hair protrude from under his American flag cap, and as he captures the scene for posterity his youthful face registers a sense of calm and accomplishment. “Isn’t it beautiful? Just think about the psychology of that,” he mentions to me, pointing to the several American flags that are hanging on the fence of the Mexican Consulate. On cue, the protesters, led by a muscled, mustached man with a bullhorn, chant: “We’re taking back America!”

For the most part Megill stays out of the fracas, content to film. I get the sense that though he is the NYC chapter of the Minutemen, he could do without the name-calling. Last April he went to the northern border hoping to spot illegal crossers. Near the Canadian line he didn’t have to worry about angry protesters. Or, it turned out, migrants. “We just saw some deer,” he explains somewhat wistfully about the tranquil operation.

“We’re taking back America!” the Minutemen continue to chant as Megill attempts to get me to appreciate the dire threat of illegal immigration. “Racists out!” the protesters protesting the protest retort. The cacophony continues for several minutes, until both sides become winded. The mustached man among the Minutemen, who has evidently been working on his cardio, seizes the opening. “We’re winning!” he yells through the bullhorn, his voice cracking. “Ha, ha! You’re losing!” Then: “You guys are losing, ha, ha, ha, ha!”

“You’re a fucking fascist!” a woman hollers back, looking like she might succumb to an aneurism at any moment. For the following hour the frenetic scene looks like it could be held in front of a Planned Parenthood in Any Town, USA: zero common ground, hysterical screaming, an ever-expanding vocabulary of denigration. “They breed like cockroaches!” a black woman on the Minutemen side yells in a scratchy smoker’s voice. “Fuck you, you fucking bitch!” comes her way. “Commies go home!” the Minutemen suggest, which doesn’t sit well with a young white man in the opposite pen. “We’re gonna fight you in the streets!” he promises.

By the end of the day, half a dozen anti-Minutemen protesters are under arrest, one for allegedly spitting in a cop’s face. (I missed that event, but spitting does seem to be a favored tactic by some on that side: a woman hoisting a black flag walks by the border control crowd and lets fly with gobs of saliva and middle fingers. Twice.) The only other deviation from the script occurs when a large figure dressed in an alien get-up walks nonchalantly past the scene, heading towards Park Avenue. En route to a movie shoot nearby, the invader quiets the crowd momentarily. Hector Cordero-Guzman dashes after the figure, hoping for a picture. He returns huffing. “I asked him if he was a legal alien, and he told me yes,” he recounts when he returns. Cordero-Guzman, who is Puerto Rican and chair of the Black and Hispanic Studies Department at Baruch College, grins widely. “I guess they have special exceptions too, like me. Only in New York!”

At one point a man from the southern Mexican state of Puebla, where the majority of Mexicans in the Big Apple originate, walks by and asks what the hubbub is about. I do my best to explain. “Huh,” he replies, shrugging. “Extraño.” Strange. I nod and am going to say something, but he has already turned away and continued on down the block, leaving the two sides to continue trading verbal blows on what is turning into a beautiful weekend afternoon.

Nalo Hopkinson's Message in a Bottle

Kamla is an art curator from the future. Sent back into our present—her past—in order to retrieve artworks that otherwise would not survive until her own time, she’s one of a group of curators who had themselves cloned.

A Message from the Publisher

How do artists and scientists contribute to our ability to communicate with one another?