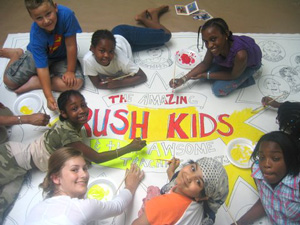 Juan, a 16-year-old from Bed-Stuy, speaks slowly, making minimal eye contact with me, a reporter. “Since I was little, I felt I was nothing, like I was a waste of space,” he says.

Juan’s self-image began to change after his mother suffered a debilitating stroke. Saddled with new adult-sized responsibilities, something in Juan shifted and he made a conscious decision to change his life. Now enrolled in PS 371—Sunset Park school with a student-teacher ratio of six-to-one that caters to those with learning, physical and psychiatric disabilities—Juan was selected to work with Rush Arts, an innovative program founded in 1995 by painter Danny Simmons and supported, in part, by his brothers, Russell and Joseph (AKA Rev. Run of Run DMC).

The mission of the project is huge, boasts Rush Arts founder and board co-president Danny Simmons. “Before the 20th century, when we started to put art into institutions, art was part of people’s lives. You saw artists every day. Now it’s different, but I know that galleries are meeting places, where, say, on a Sunday afternoon toddlers to 90-year-olds can gather. Church people and their grandkids, poets, the nosy lady up the street, writers, they can all come together in a gallery to mix and talk about what a life in the arts can be.”

In addition to operating a gallery and offering free Saturday art training for underserved youth, Rush Arts brings classes to incarcerated and newly-paroled adolescents and donates money to community education efforts throughout the city. Rush’s Brooklyn programs are located in PS 371 and PS 11, a Clinton Hill elementary school. Both schools have on-site galleries, which opened in spring 2006, to showcase student work and teach students what it is like to be a professional artist.

“The goal is for the kids to eventually run the galleries,” says teaching artist Sameeh Alderazi, one of 23 educators affiliated with the program. “We hope to have the kids think about what goes into a show, how you choose works to exhibit and then decide how to hang them. We want them to understand that these decisions take planning, thought, and negotiation.”

Simmons named his venture Rush Arts in homage to his famous younger brother, Russell, a man Charlie Rose dubbed “the Godfather of hip-hop.” It was a strategic choice.

“Frankly,” Simmons laughs, “Russell’s friends are very, very rich and most are socially conscious. We made a decision to call it Rush, Russell’s nickname, in order to tap into that. We knew that branding the gallery and the education programs with his name would give us a better chance of getting contributions.”

And it has. A summer 2006 fundraiser at Russell’s Hampton’s home netted $1.4 million and corporate and foundation donors are plentiful. Seventy percent of what is raised goes into programs benefiting Juan and kids like him.

John, a 16-year-old at PS 371, learned to take photos using 33 mm and digital cameras. “This program brought out the artist in me, in us,” he says. “It helps us become better people by throwing us out to the community as artists.”

John speaks without taking a breath, enthusiastically describing all that he has learned, from different types of canvasses to trusting his vision. “I want to do three things,” he says. “I want to go to graphic design school, go around the world for two years to take up the scenery, and start my own art and design company. No matter what,” he adds, “if you have a dream you should go for it.”

“I used to cut classes and not go to school,” says Jonathan, 15, another classmate. “Then I saw someone on a bus, an adult, drawing. He told me that practice makes perfect. I started to think, I want to do that. I love to draw cartoons. I like making people laugh.”

Although Jonathan expects Marvel comics to eventually come calling, Rush Art’s photography classes have also inspired him. “The class taught me to look at things that don’t necessarily seem important to other people, but are important, like the barber shop or the colors of a doorway,” he says.

Talking to PS 371’s “Rush Kids,” it is easy to forget that the school has been labeled “persistently dangerous” by the Board of Ed or that 93 percent of the mostly-male student body have Individual Education Plans designed to help them learn both life and academic skills. Meridith McNeal, director of education for Rush Arts, says that “In addition to art, we’re teaching the students about commitment, about being on time, and about being accountable.”

Whether at Saturday art classes in Rush’s Manhattan gallery, or in school, participants from PS 371 are expected to do their work in a timely, professional manner. They are also expected to think about what they are creating, and why. “To reflect is very important to us as artists. In a school with a bell that rings every 40 minutes, you don’t always have that. But we build it in, as a necessity,” McNeal says. Self-evaluation as well as program assessment are integral to the program.

With the younger kids at PS 11, the challenge is simply to bring art into the classroom. Unlike 371, PS 11 has a nearly equal number of boys and girls, with only a small percentage in Special Education classes. Ninety-three percent of the school’s fourth graders are on grade level in math, and 72 percent are on target in English and the language arts. Still, despite Clinton Hill’s seemingly endless gentrification, 70 percent are eligible for free or reduced-cost lunches.

“The Saturday program for PS 11 is held in Corridor Gallery, on Grand Avenue, a few blocks from the school, in Brooklyn,” McNeal says. “Danny Simmons owns the gallery and the program is for kids who would otherwise not have access to a supplemental art program.” While teachers at PS 11 select participants, based on art talent, for the cost-free 10-session program, Rush runs classes in the school several days a week so that a wider array can benefit.

“Art teachers have to teach to the blueprint,” McNeal says. “There are certain things they have to accomplish, typically in one 40-minute session per week. We have the ability to add a dimension, to do things that don’t fit into a classroom period.”

According to Na Sha, a first grade teacher at PS 11, “this year’s theme is words of wisdom and we’re integrating phonics with art. For first graders, words are very important.” The integration of reading, writing and art benefits the students, Na Sha continues. “When kids create, they feel powerful. When they feel powerful they create more. When they create more they feel worthy and take hold of the tools to become critical thinkers.”

This confluence is what makes Rush Arts tick. “Not every Rush Kid will become an artist,” McNeal admits, “but everyone’s life is enriched by knowing that you can live an artful life. So many awful things happen every day. Art brings awe and joy and deeper meaning to the world. It also helps you look at things from other perspectives.”

Teaching artist Sameeh Alderazi agrees. “When you see art, you see someone else’s idea of the world. I hope this makes it easier for people to envision things from someone else’s viewpoint.”

Indeed. But Rush Arts knows that creativity is fun, and playfulness and passion are evident in the galleries and classrooms where Rush Arts plies its trade.

For Danny Simmons, it’s about making art an everyday part of the community landscape. At the same time, he wants the program to give children and teens something they won’t get elsewhere. “Sure, the kids get art, but they also get life training and affection,” he says. “Teachers in the schools are often overwhelmed. The artists who come in through Rush can focus on them in ways that their regular teachers can’t. That’s a great thrill for the kids.”


PS 11 will hold one show, at the end of the school year, at the Rush Gallery, 149 Waverly Avenue, Brooklyn, NY 11238. The Gallery is presently being renovated and will re-open in early 2007.

Their Money or Your Life

The new virus, easier for the rich to guard against and to treat when stricken, illuminates the depth of social inequality and the general subordination of everyday life, including the requirements of human and animal health, to “the economy,” as we call the system subordinating the production of goods and services to the need of capitalist investors to accumulate profits.