Jean-luc Godard lost interest in classical narrative structure about the same time he quit caring about the problems of men. In his early films, still exploring archetypes from cinema’s past, Godard depicted men who died (physically, spiritually, morally) imitating the onscreen icons of their upbringing. Cleansed of that struggle his own self, JLG turned from the problems of men to the problem of masculinity. That did not include profession or being a warrior or a father. Instead, he asked how does a man make the woman he loves fall and stay in love with him. Like Eric Rohmer, Godard has little doubt about the answer to that question: he can’t. At least, not intentionally. 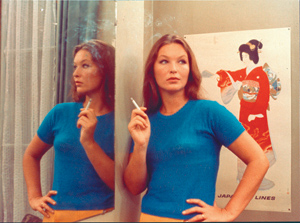 Having dealt with men, movies and masculinity in ‘65’s Alphaville and Pierrot le fou, and finished with modern romance by ’66’s Masculin, féminin, (a period of creative output to rival Bob Dylan’s, only without the amphetamines) Godard turned to women. The dissonance between their social/sexual power and their political/economic oppression became the prism through which he viewed societal ills. Capitalism was foremost, with Vietnam and the consumerism-driven loss of the soul right behind. JLG’s favorite repeating metaphor for this tension—manifest by the lead character in 1966’s 2 ou 3 choses que je sais d’elle—is prostitution.

Based on a non-fiction article in Le Nouvelle Observateur, 2 Or 3 Things follows a young mother who turns tricks—at the urging of her mechanic husband—to pay for their apartment in the soulless, newly-built, high-rise suburbs surrounding Paris. We first meet Marina Vlady, the lead actress, facing the camera as Godard whispers in voice-over: “Is her hair dark auburn or light brown? I can’t tell. Now she turns to the right—it doesn’t matter.” Godard whispers throughout the film, reminding us that an entire world of thought, politics, culture and assumption surround the story-telling.

Though story meant increasingly less to JLG—except as a chariot for his theoretical notions—here the human moments are perfectly observed, moving and never driven by plot necessity. It’s a measure of Godard’s influence that his fragmented narrative—interrupted by long shots of consumer products, epic tableau of building construction and meandering portraits of cars in traffic—proves easy to follow. Forty years ago it might have been confusing. Since then, the larger world of cinema has not caught up to Godard, but it has cannibalized what it can digest.

2 or 3 Things stands as the end of Godard’s classical period and the beginning of his more fragmented, primarily political, Brechtian, post-modern work. It also marks the height, until recently, of Godard’s adoration of visual beauty for its own sake. 2 or 3 Things is astonishingly beautiful. Given that many of the loveliest shots feature unlovely subjects—mostly suburban sprawl—it’s hard to discern now whether Godard sought a Brutalism/Futurist appreciation for the oppressive architecture of social fascism, or if he expects us to find it ugly. He doesn’t seem to find this new world lacking in seduction.

The film moves from parody (Vlady’s husband listening to Lyndon Johnson declare his intention to bomb Moscow) to social essay: Vlady works in a brothel featuring a day-care center and customers paying with consumer goods. “All I have is cat food,” Vlady’s trick mutters. “Will that do?” He adds his can to pile.

Interspersed are exquisite panorama of construction scenes, massive freeways and blank skyscrapers, evoking the framing, composition and just plain weirdness of William Eggleston. (That is, they evoke Eggleston now. 2 or 3 Things appeared a decade prior to Eggleston’s MoMA debut.) Godard’s genius cinematographer, Raoul Coutard (Jules et Jim, Le Mépris, Weekend), captures the oppression and machine-made sensuality of this alien universe: a robins-egg-blue dump truck jerking back and forth, the unbearable weight of a freeway hovering over the workers beneath, a slow pan across a horizon of glass and steel.

Because it stands with Le Mépris as Godard’s most beautiful, cinematographic and profound film—and because its modernity is both Pop and so of any age—this brand-new, remastered 35mm print is a revelation (new, more idiomatic subtitles have also been added). The Pop seduction of consumerism is explored via garish shots of detergent, the inside of electronic devices and construction cranes made ominous and sexual. Unlike the winter-cold irony of Alphaville or the snotty affection of Masculin, feminn, 3 or 2 offers an early glimpse of the exquisite heartache that so informs Godard’s more recent works, like 2001’s In éloge de l’amour and 2004’s Notre musique. Godard cuts between moments crammed with banal dialogue and ambient-sound dioramas of a new city being noisily created. He finds his poetry in the spaces between these moments/shots, and the irresistible horror/beauty of the industrial maelstrom as only Godard could perceive it. He creates an ineffable, purely cinematic poetry, where there is no accounting for the powerful emotions his juxtapositions provide. The impulse to become over-analytical is a by-product of sitting through any Godard picture. But 2 Or 3 Things is the rare Godard film in which the emotions hit harder and linger longer than the ideas. As always, he’s witty as hell. As one montage makes you ache, another makes you laugh aloud.

Contemporaneous critical writing insisted that Godard was determined to shatter filmic narrative convention. Forty years after 2 or 3 Things’ initial release, it’s clear that Godard simply replaced classic structure with his own—more emotionally driven—pacing, plot and emphasis. He may not longer care about what-happens-next, but he puts two images together with an awareness of their power, and, more importantly, of the resonance their montage creates. Nobody thinks like Godard, nobody cuts like him, nobody lets ideas carry emotion and emotion carry ideas as he does. With, like, ninety films made and who knows how many more to come, it’s tough to claim that one is his finest. But there is one you must not miss, one that must be seen on the big screen. This is it.

Nuri Bilge Ceylan may be the least-known of the world’s four or five greatest directors. Only his 2003 Distant (Uzak) is available on DVD. With Distant, Ceylan proved himself the first clear artistic descendant of Tarkovsky. Using Tarkovsky-like framing and pacing (that is, slooow), Ceylan explored the existential discontents of Turkey’s urban and rural cultures, through a story of an unwelcome country bumpkin coming to visit his sophisticated, emotionally paralyzed Istanbul cousin. Released in 2002, Distant had a tiny domestic theatrical showing in 2004, and was easily the best film of the year. It shares a kinship of look, feel, pacing and melancholy with another outstanding film of that year, Andrei Zvyagintsev’s The Return.

Climates, Ceylan’s new film, focuses more on human connection than a larger cosmic or political theme. Ceylan cast himself and Ebru Ceylan (they are married) as a couple whose love has turned to grinding bitterness. Climates explores how a man who never says what he means drives love away even as he yearns for it daily. Some of the most moving scenes are practically dialogue-free, and all are shot in rich, painterly palette that is Ceylan’s trademark.

A gifted still photographer, he composes a visually nourishing frame that bears the weight of his long, unmoving takes. There are images in this film that no film before has attempted and depictions of relationship moments too familiar to bear. Without a doubt, Climate is the best film of the year.

Sara Erenthal’s Art of the Street and Screen

Artist Sara Erenthal’s canvases are discarded objects: flat-screen TVs, couches, refrigerators, and wooden panels and doors. Her characteristic iconography is a hand-painted, black-outlined woman with big hair, almond-shaped eyes, and small red lips accompanied by lines like “I’LL BE AS LOUD AS I NEED TO BE,” “GOOD NEWS IS COMING STAY TUNED,” and “I WON’T MAKE MYSELF VULNERABLE TODAY” (the last notably written on a discarded mattress).

By transforming the single word of the show’s title into a question, the gallery provokes viewers to come to terms with its meaning.