The New York City Horror Film Festival just celebrated its fifth year by screening over forty films at Tribeca Cinemas. The festival helps sustain a genre that’s not exactly thriving. Granted there have been several new big studio horror film releases of late, but they codify one of two dismal trends: trite remakes of cult classics (Texas Chainsaw Massacre, The Hills Have Eyes) or exploitative gross-outs (Hostel, Saw). The NYC Horror fest focuses new films and rising directors. Over four days the festival presented jam-packed programs, each consisting of multiple shorts and one feature, and each providing a sample of what’s current in horror. 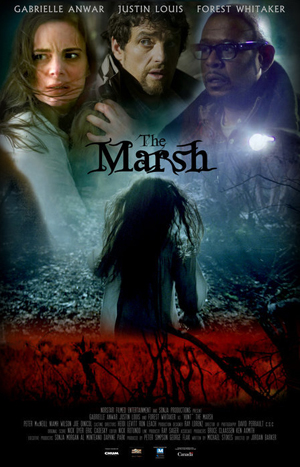 Considering the genre’s intrinsically subversive nature, it’s only natural that the festival has a more independent slant. Where else besides cable and direct-to-DVD are you going to discover films like The Marsh, The Lost or a special repertory screening of Lucio Fulci’s gore-munching classic Zombie (with the eyeball scene intact)? While not arguably stellar works of art or fonts of illuminating insights into the problems that plague our society, these pictures do provide those obsessive tropes horror fans revel in. Whether senseless killings, ominous ghosts, or the living dead, all serve our compulsion to be cathartically freaked out. The informed audience met each film with either appreciative laughter or sardonic distance. This is an audience that savors being in the know, and wants you to know they are, but the enjoyment remained palpable.

Appearing was horror author Jack Ketchum, whose novel The Lost was adapted into one of the festival’s more gruesome highlights. The Lost shares lineage with 70’s cult gem The Todd Killings and the odd Dead Beat (you know it’s gonna be out there with Debbie Harry in the cast). All share the same true-story source material: the case of Charles ‘Smitty’ Schmid. Known as ‘The Pied Piper of Tucson,’ Schmid was a low class lothario who stuffed his cowboy boots with crushed beer cans to compensate for his diminutive stature. Despite his odd behavior and loser lifestyle, Schmid managed to charm the pants off of several local teenage girls, three of whom he killed, rather casually, as he manipulated his friends into becoming co-conspirators.

Set in anywhere/nowhere U.S.A., The Lost finds the Schmid character—a calculating, misguided post-adolescent sociopath—randomly killing two girls camping in the woods just to see what it feels like—how’s that for ‘existential horror?’ The Lost captures a gritty underside of Americana by focusing on the flotsam of youth in a hypocritically puritanical society. Director Chris Silvertson used his miniscule budget cunningly, establishing a seedy tone while affecting an appropriate retro-exploitation look and feel. If you were told The Lost was an ’80’s grind house flick left behind from when Times Square was still ‘the deuce,’ you’d believe it. Nevertheless, it resists categorization. With Schmid as a springboard, Ketchum’s tale wallows in teen vice and true crime sleaze peppered with harrowingly misogynistic moments. Instead of screaming moral bankruptcy, The Lost never empathizes with its villain nor glorifies the violence. Instead, the true agents of horror are misanthropy and angst spawned from suburban American ennui.

The growing pervasiveness of the media enables the specter of real-life crime to dominate horror, overshadowing more metaphoric boogeymen of our innocent cathartic freak-out past (Dracula, Frankenstein, the Wolfman, et. al.). Even today’s supernatural horror seems to be less about the paranormal and more linked to modern technology or society’s growing disconnectedness (more often than not depicted as an after-effect of said technology). The Sixth Sense offers a banal example, while the J-horror boom, from Ringu to Pulse, represents a more primal reaction to our new-fangled environments. Horror generates new tropes, though we might lament those films in which dark shadows held far-reaching ominous powers, from the expressionistic dread of Dreyer’s Vampyr to ’60s Euro-gothic shockers like Bava’s Black Sunday.

Given that the old dark house has for the most part changed its façade, it’s refreshing to see a b-picture like The Marsh, an old-fashioned ghost story in a contemporary setting. Knockout Gabrielle Anwar (Scent of a Woman, Abel Ferara’s Body Snatchers) stars in this Canadian tale of a young children’s book author whose recurring nightmare of an eerie marsh prompts her to move into a spooky house next to…an eerie marsh. The ghostly figures from her dream soon appear, including a forlorn little girl in a nightgown, and a mutilated man who suspiciously resembles the aloof bumpkin that runs the local store. The script is convoluted and clichéd, but that’s the horror fest rollercoaster—a seemingly predictable paradigm leads to a sudden, redemptive jolt. The Marsh compensates for its familiar storyline with inspired production values (or at the very least, a nice use of blue gels). Standout set pieces include the opening wherein Anwar’s gloomy children’s tale is brought to life, and the final showdown with ghosts, replete with gothic gusts of wind, breaking glass, etc. (The Marsh rightfully snagged the festival’s best special effects award). Show-stealer Forest Whitaker makes one of many welcome b-movie appearances here as a ghost buster who explains apparitions thusly: “People are weird. Then they die and get even weirder.”

Their Money or Your Life

The new virus, easier for the rich to guard against and to treat when stricken, illuminates the depth of social inequality and the general subordination of everyday life, including the requirements of human and animal health, to “the economy,” as we call the system subordinating the production of goods and services to the need of capitalist investors to accumulate profits.