‘Kawaii’, the Japanese word for cute, is more than an adjective, it’s a far-reaching concept and cultural phenomenon. During the ’80s, Japan saw so-called ‘idols’ dominate pop culture with an emphasis not on traditional sex appeal, but girl/boy next door ‘cuteness’ instead. Marketing geared towards young audiences who identified more with an ‘average’ adolescent like themselves than a larger than life star. The Japan Society’s “Lolita in Full Bloom” series features five popular “idol movies” from the ’80s, offering a revealing look at what makes Japanese pop culture tick and what “kawaii” really looks like. 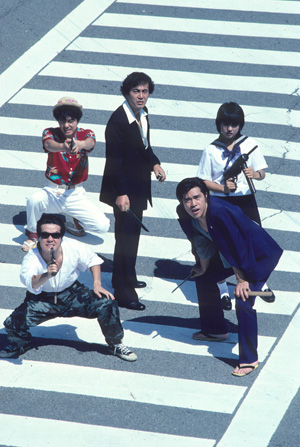 Haruki Kadokawa, heir to a modestly successful publishing firm, used megalomaniacal ambition and marketing savvy to transform himself into a flamboyant movie mogul. While his early film productions were box office successes, his biggest breakthrough was the discovery of teenage super-idol Hiroko Yakushimaru. Perhaps more than any other idol of the era, Yakushimaru—along with Kadokawa’s other popular starlet, Tomoyo Harada—played perfectly off of the dichotomy between traditional Japanese beauty and the appeal of the modern girl. Appearing at once coy and demure but also sassy and cheeky, Yakushimaru became so popular that one of her sold-out concerts resulted in a near riot.

The series opens with the quintessential idol film and Yakushimaru’s most memorable role, Sailor Suit and Machine Gun. Wearing the sailor-suit high school uniform of the title, Yakushimaru plays a teenager whose father suddenly dies, leaving her heir to a Yakuza clan. The film is a tongue in cheek take on Yakuza films, concluding with Hiroko blasting away all her gangster enemies with a machine gun and crying out “KAIKAN” (ecstasy)! Before you could say “Where’s the beef?” everyone in Japan was imitating this scene.

Director Shinji Somai, known for pushing his actors to their limits, also used this film to perfect his performance-foremost, one scene, one cut “Somai Style,” now taught in Japanese film schools. If Sailor Suit is any indication, Japanese youth films of the ’80s had a more surrealistic and viscerally rewarding sensibility than their U.S. counterparts. American movies at the time had lost the deranged abandon of films such as 1968’s Wild in the Streets, in which a teenage rock and roll singer becomes president and the senate is fed LSD before being herded off to old-age camps.

Another watershed of the idol film boom was The Little Girl Who Conquered Time. Adapted from a popular young adult novel, this Tomoyo Harada vehicle is about a girl able to travel through time by smelling a lavender liquid. Exchange Students maintained a similarly bizarre, juvenile appeal with its gender-bending tale of a teenage boy and girl who change places a la Freaky Friday. Shinji Somai’s Typhoon Club, about a group of students stuck in school together while a storm rages outside, offers a more naturalistic take on adolescent awkwardness, coming of age and the “discovery” of the opposite sex. And what better metaphor for youthful sexuality than an encroaching typhoon?

I remember very well the first works I saw of yours, in a private showing, “Icons of Light,” as you called them. They were photographs of paintings, shot at an angle so that the reflected light wiped out the image. These were framed as paintings then hung on the wall. These “icons” gave back nothing except the absence of a picture, and yet they provoked a desire to see beyond this instant of blindness. Is this fundamental to your approach to photography, that it can be made to disclose and withhold at the same time?