Jean-Luc Godard’s 1985 Hail Mary (released October 10th by New Yorker Films), coming twenty years after Contempt, and twenty years before Notre Musique, springs from smack in the middle of the no-man’s land that was Godard in the ’80s. Though this arid time span is often lost in discussion of Godard’s past glories or current obsessions, Hail Mary provides a clear window on JLG’s response to Reagan and Thatcher. 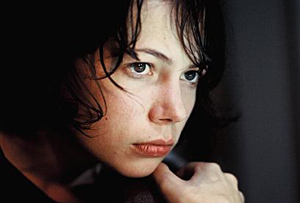 Michelle Williams giving her all in Land Of Plenty.

Causing a stir upon release, with nation-wide bans and official denunciation by the Church, Mary superficially offers a modern day, middle-class retelling of the Virgin Mary of the Christian Testament. In a post-Bunuel universe, Mary seems neither shocking nor outrageous as a religious critique. The controversy speaks less about Godard as an enemy of religion than it does about the Church as the mindfuck that is the Church.

This film concerns not the Virgin Mary, but rather Godard using her story as his means to spirituality. Equally critical of philosophy as the entree to the spiritual world as he is of the miracle as a necessity for transcendence, Godard’s search leads him to beauty as the only evidence of Grace. Lacking his regular cinematographer Rauol Coutard (A Woman Is A Woman, Band Of Outsiders, Weekend), Godard relies less on crafting the physical surroundings of his characters. Instead he revels in the natural world with atypical extended meditations of the sun setting hitting the water, bouncing off trees, etc. We also find Godard leaning more on music than usual, with Bach and Dvorak adding to the refined and classical, though bourgeois, beauty of the film.

At the heart of Hail Mary is the love story between Mary and Joseph. For Mary, Joseph’s love means nothing if he distrusts her, and does not accept a pregnancy he cannot understand. This trust becomes Joseph’s leap of faith and, for Godard, his own attempt to find spiritual meaning both in love and in femininity. The film posits that any sense of woman as “other” or “mystery” begins with Eve and is continued by Mary, women that defied the natural order of the world, and required men to love them not despite their singular character, but because of it. Any controversy the film caused should have been about Godard’s meditation on Mary as an untouchably beautiful yet sexualized virgin. His muse for Hail Mary, Myriem Roussel (Passion, First Name: Carmen), is filmed with tenderness and poetic grace. (Look out for a twenty year old Juliette Binoche in a supporting role.)

Also included on the DVD is Anne-Marie Mieville’s 1984 film, The Book Of Mary, which was often screened in theaters before Hail Mary. Mieville, Godard’s life-partner and frequent collaborator, joined JLG in the mid-‘70’s when he parted from Jean-Pierre Gorin and their Dziga Vertov Group. Her 26-minute movie is unfortunately an unimaginative, standard-fare straight-narrative about a couple going through a divorce, and its effects on their child, Mary. Lacking the inventiveness of her earlier work (particularly 1976’s Ici et Ailleurs), Book seems overly sincere and sympathetic to the point of being pedestrian, evoking the dialogue and emotional conflict of an after-school special. The DVD includes a 12-minute making of “featurette” on Hail Mary.

Also released October 10th was Wim Wenders’ 2004 Land Of Plenty. Apparently conceived, written, and filmed in a little over a month during downtime from 2005’s Don’t Come Knocking, the film had little to no theatrical presence in NYC, and no nationwide distribution. Wenders’ first production after the events of September 11th, Land continues his longtime obsession with America and our culture, which here includes our politics. A highly reactionary work, clearly written by an outsider, Land is Wenders’ response to the frenzied paranoia that immediately followed 9/11. Yet the film already seems dated and time/event-sensitive by the fall of 2006. John Diehl and Michelle Williams star, and do a fine job with the heavy-handed script and Wenders’ usual awkward dialogue, which here arrives with a side order of ham-fisted political commentary. The tension comes as we are left to decide if this film, and films like it, add a necessary voice to the social and political discourse, or if its clumsiness indicates just how marginalized and misdirected its opinions are — a film that hardly anyone saw, never mind anyone who might’ve been swayed by its critique. Its best moments are playful and self-conscious, but overall Plenty suffers from an overbearing earnestness. (On that note, also worth checking out is Hal Hartley’s similarly inspired and poorly distributed 2005 film The Girl From Monday.) Included are a commentary by Wenders and a 10-minute making-of documentary.

Wenders’ own 1985 film, Tokyo-Ga, was released last May as a bonus feature on Criterion’s double-disc version of Late Spring (directed by Wenders’ “all time grandmaster,” Yasujiro Ozu). The film is ostensibly Wenders’ pursuit of any traces he can find of the city that gave birth to Ozu, who Wenders clearly loves, admires, and respects. But just as all Wenders’ films are about a man looking for something, they are also, as the cliche goes, “more about the journey than the destination.” While this journey takes the eager Wenders to Tokyo, what he seeks is not Ozu but personal inspiration. Part of an unofficial series where Wenders studies the work of other directors, and the directing process itself, Tokyo-Ga exists in the hopes of re-arousing the creativity that produced several of the most original and enduring films of the ’70s

Beginning with 1980’s loving and playful portrait of the dying Nicholas Ray, Lightning Over Water, the series continued with 1982’s The State Of Things, a self-reflexive and reactionary work coming out of Wenders’ humiliating experience working with Francis Ford Coppola on the embarrassing and clumsy Hammett (released that same year). Though the film (not currently available on DVD) won the Golden Lion at Venice, it was still a director coming to terms with his craft and the business of movies, something Wenders seemed too focused to worry about earlier in his career. The next installment was Room 666, a documentary filmed at the 1982 Cannes Film Festival, made up of interviews with directors being asked, “What is the future of cinema?” The participants include Godard, Antonioni, Herzog, Fassbinder, and, weirdly, Spielberg.

That the series culminated in 1985’s Tokyo-Ga speaks to the film not only as the most fully realized of the group, but to its director at his most vulnerable and submissive. Wenders no longer seems sure of anything, other than the gushing words he consistently directs at Ozu, and the incongruously innocent curiosity and awe with which he shoots Tokyo. The slow contemplative pace of the film is the background for Wenders’ musings on this artistic pilgrimage, his vulnerability leading him to be poetic, intimate, and direct. A “film essay” more than a documentary, complete with the form’s requisite loose structure and blank canvas for its creator’s musings (or wanking, as the case may be), it features cameos by Chris Marker and Werner Herzog, both known for their singular and revelatory commentaries. As loving as Tokyo-Ga is about Ozu, including some wonderful and touching interviews with Ozu’s main actor and cameraman (Chishu Ryu and Yuharu Atsuta, respectively), its greatness comes from the artist’s search for himself in a foreign place. The soulfulness of Wenders’ early work makes a rare appearance here, and it is well worth seeking it out. (The film came directly between Paris, Texas and Wings Of Desire, widely seen as Wenders’ rebirth).

Matt is currently putting together a book of interviews, On Political Film.

John Ferren: From Paris to Springs

John Ferren’s extraordinary biography can sometimes overshadow his achievements as a painter. Born in Oregon in 1905, he spent some youthful years in the 1930s in Paris, where he befriended Gertrude Stein, and was embraced by the Parisian avant-garde.

In an essay on Joseph Cornell’s shadow boxes, Mary Ann Caws writes: “The memory and the prophecy are not different: we must remember to remember.” Whether familiar with or new to her work, one immediately encounters, here, the infinitive: the not yet that is and from where all else will come. More than just the genius of art criticism, more than merely a marvelous instance which is the surrealist’s desire to keep intact, this single line of poetry—penned more than twenty years ago—remains one of the very principles of her poetics. Like Cornell’s Proustian remembrances, Breton’s haunting “Who am I?” and Char’s aphoristic-elliptical enjoinders, Mary Ann Caws makes us aware that life—that primordial passage—must be looked at anew and with ever-renewed looking, if we are ever to see the red chili pepper affixed with wings that form the dragonfly, or fall madly in love and at the same time lovingly into madness.