Hereditary nobility may be one of the more preposterous notions humanity has come up with, yet the less real-world power royalty wields, the more deeply appealing we plebs find it—not as a mechanism of practical politics, but as a collective dream, a fairy tale brought to life. And the most resonant dream, as countless fairy tales show, is the one about the imperiled princess. 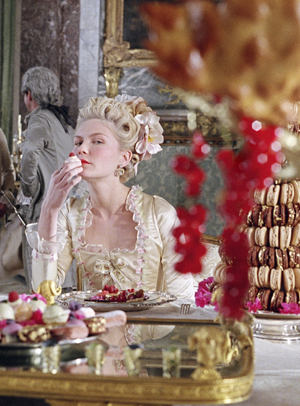 Kirsten Dunst brings it on as Marie Antoinette.

Variations on that story are told in diametrically opposite ways by two of the season’s more conversation-worthy films: Stephen Frears’ neo-documentary The Queen and Sofia Coppola’s confectionery Marie Antoinette.

Both movies depict turning points in the history of European monarchy: one, the political collapse of the old order, the other, its more recent surrender to the crowned heads of media celebrity. Fittingly for our image-addled time, the film that concerns life-and-death power politics is deliberately conceived as an extended music video, while the one about tabloid trivia reaches for, and achieves, moments of genuine grandeur.

Marie Antoinette is the more conventionally mythic of the two, reminding us at every turn that this is not a history lesson, but a fable. Coppola presents the French court as a Vogue photo spread come to life, all slender beauties in outrageous clothes framed by gorgeous vistas, with glasses of champagne ready at hand and 1980s pop blasting in the background. It’s not a bad way of describing France’s rapacious ancien regime, but after a while we begin to suspect that this bon-bon of a movie is not so much depicting vapid decadence as embodying it.

Kirsten Dunst plays the title character more as dim cheerleader than doomed queen. An archetypal poor little rich girl, she’s a lonely innocent surrounded by harpies and vultures in powdered wigs. The stifling protocol of the court is played for laughs, and so are her wan efforts, unsuccessful for seven years, to convince Louis XVI (a newly dumpy but familiarly 21st-century Jason Schwartzman) to consummate their marriage.

Whatever the queen of France’s woes may be, bad hair days and nothing to wear are not among them. Deciding the best revenge is living obscenely well, she proceeds to run through as much of the state treasury as she can get her beringed hands on. Her eventual death at the hands of the Paris mob, elegantly alluded to rather than shown, throws a gloss of tragedy over a tale that’s in fact concerned mostly with sex and shopping.

Versailles looks sensational, and so does all the other merchandise. Coppola composes shot after beautiful shot of elaborate dresses in electric pinks, blues, and yellows, shoes pretty as cupcakes, pearlescent pastel gambling chips, pink and white couture cakes. Sensual pleasure with a big price tag is the only reality the movie seems capable of evoking with any passion. Art and nature are merely opportunities for conspicuous consumption; religion is, aside from the outfits, a drag. Any motives that can’t be dramatized in a fashion layout—love that’s more than a diversion, honor, duty, the thrill of command—remain offstage, like men waiting for their wives to emerge from the boutique dressing room.

The Queen, by contrast, although it doesn’t stint on showing us the glossy perquisites of royalty, is about nothing less than the intersection of love, duty, and power. Its unlikely subject is the public-relations crisis faced by Queen Elizabeth II and the British monarchy after the Prince of Wales’ ex-wife, the neurotic but mediagenic Diana, died with her lover in a Paris car crash in 1997.

Diana was no longer a member of the royal family, and certainly no favorite of her former in-laws, so the queen feels fully justified in regarding her death as a private matter, not an affair of state. But newly elected Labour Prime Minister Tony Blair, riding the wave of public grief in service to his own political advantage, insists that the weeping crowds and barricades of flowers massing in front of Buckingham Palace require a state funeral and a public response from Elizabeth, centuries of protocol be damned.

It’s hard to imagine why anyone thought this would make a gripping film. The Queen is, after all, the story of a dowdy old woman deciding whether to make a speech. Yet Frears and his screenwriter, Peter Morgan, have turned out a picture that is not only tremendously entertaining but moving in ways that may surprise even die-hard anti-monarchists.

This film is as fascinated by the royals’ clothes and real estate as Marie Antoinette, but Frears’ approach is anthropological rather than aspirational, with straight-ahead camera work and clever use of newsreel footage to emphasize that this life is the Windsors’ fantasy but not ours. Prince Philip and the Prince of Wales swanning around in their kilts, the Queen Mum growing misty over the lavish plans for her own funeral—these folks would make a far more interesting reality-TV show than Coppola’s fashion plates.

Decked out in oddly fashion-free hats and frocks, Helen Mirren offers an uncannily convincing portrayal of Elizabeth as a creature from another planet who nonetheless grieves and suffers like an earthling. The pain that flickers across her face when Prince Charles praises the physical affection his late wife showed the two little princes is even more poignant for being so obviously well deserved. So is her anguish at having to publicly humiliate herself in order to shore up the idea of the monarchy, and in her view the soul of the nation, against the assault of headlines screaming “Show Us You Care!” As the queen finishes delivering her funeral address, she wears the dazzled look of a martyr.

Earlier, when she wanders the spectacular royal estate at Balmoral, her eyes well up at the sight of a lordly stag. Her tears are not for Diana (that self-dramatizing blabbermouth) but for her own poor self, the embattled relic of a dying breed. Moreover, we feel her pain, because each of us can count on being confronted with our irrelevance sooner or later, even if we don’t have 40,000 acres in Scotland in which to feel sorry for ourselves.

While The Queen depicts the royal family as clueless troglodytes, it takes an equally cool view of populist politics as embodied in the moistly ambitious Blair (played with just the right dewy eagerness by Michael Sheen). the Queen’s stiff-necked belief in her own sanctity may be insane, but it’s based on some notion of principle, however retrograde. The same can hardly be said for Blair’s political arse-creeping of the Diana cult.

Say what you will about Elizabeth, but in The Queen she at least understands noblesse oblige—that the trappings of royalty carry some responsibility to the people whose necks you’re standing on. A dinosaur Elizabeth may be, but she recognizes that her servants and subjects are not the only ones with duties to perform.

At one point in Coppola’s film, a minister warns Marie Antoinette that people in Paris are starving, and she answers, “We must do whatever we can to ease their suffering,” a line Dunst delivers with all the conviction of a child reciting her part in an elementary-school pageant. This empty nod to compassion is perhaps intended to show that the French queen wasn’t such a bad sort, but it only underlines her inability to even imagine the human cost of the disaster she is helping to create.

In this she’s reminiscent of people like the Bushes and the Waltons and their congressional hangers-on. If only our American dynasts had a bit of the British queen’s humility. Instead their predatory view of public service as a means to private profit is the real-life version of Coppola’s teenage fantasy of self-indulgence and self-will, although not nearly so pretty to look at.