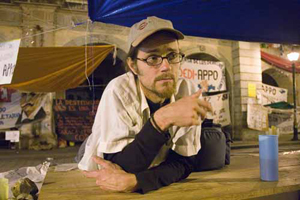 I just hung up the phone with my friend Maia. She spoke to me from a rickshaw somewhere in India; now and again, the blare of unfamiliar street noise overwhelmed our voices. It was a conversation neither of us wanted to be having. I had to tell her that on Friday, October 27, our friend and colleague Brad Will was murdered by paramilitaries in Oaxaca, Mexico. For five months teachers there had been striking, and they wanted to oust the governor, Ulises Ruiz. Brad, a journalist with the all-volunteer Indymedia news organization, had traveled to Oaxaca to document the teachers’ struggle, just as he’d traveled to Bolivia, Brazil, the Yucatan peninsula, and elsewhere to record stories that the mainstream media either under- or misreported.

News of Brad’s murder—via one gunshot to the torso when plainclothes government agents began firing on the strikers—has reverberated around the globe. Condolences and expressions of outrage have poured in to the NYC Indymedia Web site from Germany, Chile, South Africa, Italy, France, Greece, Belgium. Everyone knew Brad, and pretty much everyone dug him. Tall, scruffy, a little stinky and a lot gorgeous, he hummed with infectious optimism; he radiated joy. He didn’t have a dour bone in his body, and I don’t recall his ever uttering a mean word about anyone—kind of a shocker, considering the range of personalities and temperaments that rub up against each other in activist circles.

I met Brad in 2001 when a friend and I were organizing events around Buy Nothing Day. What we planned was complex and ambitious, and plenty of more-seasoned NYC organizers scoffed that it couldn’t be done. Brad encouraged us every step of the way: He attended meetings, helped us publicize, and built props, not to mention ate whatever was in my fridge at any given time (no food was safe around him). The event was a fun, messy success, and afterward, Brad hooked me in with Reclaim the Streets, which became my home in New York activism. 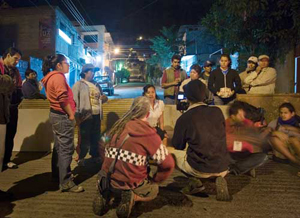 Building community was at the core of Brad’s life, whether it was connecting like-minded people, doing grunt work like lugging drums at the end of a demonstration, defending community spaces like Charas, or investing time and effort into making projects like Indymedia thrive. A dedicated anarchist who fought for people’s right to determine their own lives, Brad was committed to joy, to singing and guitar playing, to creativity, to all of the pleasures life offered. Think Emma Goldman: “If I can’t dance, I don’t want to be part of your revolution.” His life and work were a tremendously cool balancing act that blended local struggles (squatters’ rights, preserving L.E.S. gardens) and international travel that helped him understand and communicate the way in which globalization affected ordinary communities. His ability to stay lighthearted through what could be a thankless slog both inspired and bewildered me. 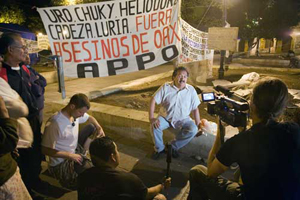 That’s not to say that Brad didn’t encounter despair. When he was in Brazil in early 2003, there was a massacre at the homeless encampment where he was staying. He wrote to me: “I feel like I am haunted—I keep seeing a thin woman’s body curled up at the bottom of a well, her body in a strange position—I can’t escape it.” On that trip, he also sent me poems, love notes and his famous stream-of-consciousness dispatches. For him, art, love and revolutionary struggle were inextricably linked in a roaring enthusiasm for life that always beat back hopelessness. Fearless but never reckless, Brad knew the risks of what he did. When a friend of his died in a tree-sit in the 90s, he said, “We all knew this could happen; we all knew one of us might die.” He sought neither prestige nor thrills, much less a paycheck. He loved this mad, maddening world of ours with every ounce of his being, and he gave his life while seeking its betterment.

While traveling with the Zapatistas early this year, Brad wrote:

We lose so much and fight so hard—sometimes we want to break down and cry, rip out our hair in frustration, fight with friends, hate ourselves—but sometimes we need a simple moment to reflect and shrink the world into a tiny point and look at it for what it is, misshappen, broken, dying—but realize that even though we are children of a messed-up human race it doesn’t mean we can’t try—we are busy undoing the damage they have done, done to us—but it is good work and we can do it.”

Out of love for Brad and for life, I’ll try.

A writer based in Jersey City, Kate Crane is writing a memoir about her father's 1987 murder.

Researcher Christopher Walker in conversation with science fiction author Kim Stanley Robinson about the role of optimism and speculation in ecological writing.

The flag of Syria’s revolutionary Kurds flies from the roof. A multiculti congregation of scruffy youth hang out in the lobby—some Italian kids with dyed hair and a punk aesthetic, some young migrants from Africa and the Middle East.

Unstung’s polymorphic nature across and outside of the paintings is the show’s great strength. Where Richard Prince’s joke paintings are deadpan, and where Chistopher Wool’s text works are blunt, Jablon proffers optimism and even political engagement.