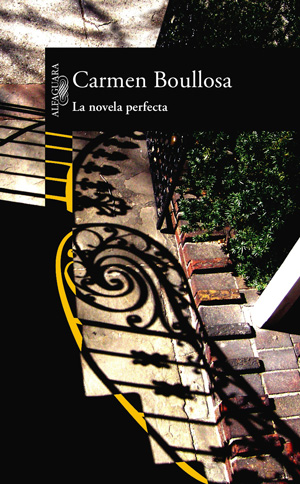 Carmen Boullosa, the Mexican novelist, poet and playwright, lives in central Brooklyn. A student of Juan Rulfo, she is now a professor at the City College, a host of the CUNY TV program New York; she has also been a fellow at New York Public Library and the Guggenheim Foundation. Boullosa’s Brooklyn house and neighborhood provide the setting for her new fantastic novel, La Novela Perfecta.

I read the last page of La Novela Perfecta on the subway on the way to her house. The story ends as all the characters from different moments of their fictional lives reappear at the same moment, mad and violent. In real life, it’s raining when I reach the brownstone, which is located next to that of the main character in the novel. Carmen opens the door.

One step inside and I recognize some details of the house, just as moments before I had recognized the street and its surroundings. I fear that I will meet characters who behave as those which one encounters at the end of the story. But this is reality and Vértiz, the protagonist, and Boullosa, the author, do not seem alike, despite being both Mexican and writers.

Vértiz is idle and from a comfortable background. It has been years since he has written a line. He lives off his wife, a successful lawyer, and spends his days comparing every little thing with Mexico. A provincial man at heart, he is obstinately anchored to his language as the ultimate redoubt of his identity.

The neighbor, an inventor, makes him an offer that a lazy writer can’t refuse: software that will permit for the realization of a book which he has been ruminating about for years, and have it be exactly as his imagination has perceived it, without words or effort. Instead of being read, this apparently perfect novel will be felt, smelled, seen and touched, and it will even arrive to the consciousness processed, previously digested, without any possibility for interpretation.

This attitude is roundly scorned and criticized by the real author. “It is an irresponsible belief to think that a book is just a product for consumption and not a secret weapon which obliges the reader to take an extreme position. But, this writer—Vértiz—doesn’t believe in literature,” comments Boullosa from the quiet of her home.

Boullosa says that La Novela Perfecta is an homage to the neighborhood where she has lived for two years, as well as to the “heroes” of her youth, the Argentineans Bioy Casares and Jorge Luis Borges, the foremost exponents of Latin American fantastic literature. “This is my Brooklyn novel. This neighborhood fascinates me as an almost prototypical city, with people from all over the world living together in a small place,” explains Boullosa, whose previous novels include Antes and La Otra Mano de Lepanto. “I’m right next to a mosque, and nearby stores with Al-Jazeera propaganda as well as Jewish shoe repair shops. These are cultures that are obliged to make a pact of coexistence. When one takes the subway in Brooklyn you reach another space, marked by different limits, because there is always a border zone with other cultures.”

“Brooklyn’s rhythm is different from Manhattan’s. It’s hard and intense, difficult and with enormous inequality,” Boulossa says. On the periphery of the scene—both in reality and in the novel—are Mexican immigrants, who speak with the novel’s protagonist when he roams about the neighborhood. Vértiz doesn’t stop to reflect on their situation because of his lack of social conscience and any knowledge about the real labor situation of those who have recently arrived. “It’s a depressing portrayal of immigration, not one of success. The immigrant is not a voluntary traveler, he or she is here to fill the pockets of their family in Mexico,” Boullosa explains.

This is not the case for Vértiz, nor for Boullosa. “I am a travelling writer who leaves the margins of her culture for nourishment and in order to see herself through the eyes of another. Despite this, in my youth I had decided that I’d never change my Mexico City for anything else in the world,” she says. She begins to list the reasons why she thinks that Mexico City in the sixties was such a wonderful environment for the development of intellectuals and artists.

In her early twenties she received a grant to write her first novel Mejor Desaparece. Her mentors at the time were Juan Rulfo and Salvador Elizondo, “two marvelous and fierce animals,” as she describes them. In her opinion the circle of writers was less masculine than in the present. Women were widely appreciated. This is also where Octavio Paz, the Nobel Prize winner, circulated. “It was a very accessible literary world. Roberto Bolaño was there and he wanted to kill the Father. I was frightfully afraid of him. I had read his first poem, which was published in the same anthology as mine. Intellectuals looked upon him with scorn, not me. They were incredible times. It was like the Latin-American cultural capital. People arrived to live in Mexico and no one thought in terms of a cultural industry—well, except for García Márquez, but we didn’t pay attention to him.”

“Is it very difficult to start up as a Latino writer in New York?” I ask Boullosa.

“I’m not a Latino writer, I am a Mexican writer,” she explains. “I publish my books in Mexico and Spain and have my readers there. I haven’t made my career in New York. I only arrived four years ago; I’m 52 years old and began publishing when I was 19. My literary world is in Mexico. My case is like many Latin-American writers who live for a period of their life in New York. I don’t regret it and have grown a lot. But I do not have a career as a Latino writer at all. I belong to a tradition of authors who have come here to write,” she says, naming the poets Julia de Burgos and Federico García Lorca.

La Novela Perfecta was nourished by various rumors from neighbors, which Boullosa included in the story. “I’ve got that sort of vice,” Boullosa says, confessing a compulsive addiction which is clear as the minutes of conversation pass. She loves fables and can’t avoid telling and listening to stories. In this case, she struggled to find the right tone for the story to be written by her fictitious author. “I was given a literary possibility which was a challenge for me—to set the expressive capacity of language in a limit. I don’t use spanglish, but instead a dialect from Mexico City, very chilango, frozen in the 1980s, when Vértiz arrives to New York. It is a language at risk of contamination and therefore its defenses are at a hair-trigger sensitivity, almost ready for a battle, because there are so many surrounding languages. It has nothing to do with how I speak, or even how I normally write.”

“And so the work’s real protagonist is language?” I ask.

“Yes,” she says. “The tone and language is not Carmen Boullosa, but of my characters. It is a language which I use in theater, the voice of an imposter. It’s always me and my obsessions, but I give the character the voice. Generally I don’t insert my language into the territory of the authorized voice. I even do this in my poetry. They are types of masks. Previous generations had believed in the possibility of constructing omniscient narrators, but, after ’68 we stopped believing this way. For us it had been a moral issue,” she recalls. That year was crucial for the author’s generation: hundreds of university students were massacred by the Mexican government.

Before we say goodbye, the writer switches roles. She is now the one who asks the questions, with apparent innocence.

“Your pseudonym (Alina Reyes) comes from Cortázar (Julio, another Argentinean writer, famous for his fantastic short stories),” she observes.

“Yes,” I respond, almost not realizing what I am getting myself into.

“Do you know anything about the other Alina Reyes who in the end is a man?” she asks. “He also took the name of Cortázar.”

“You mean the French female writer Alina Reyes was not a woman?” I say.

“Yes,” Boulloas replies. “In reality the famous novelist was a ruined male writer who never sold anything and thus decided to invent the female author.”

“But, there are photos of her.” I protested. “If it as you say it is, she would never be able to go to a book launch or conference.”

I begin to envy the ruined writer; he beat me to both finding the pseudonym as well as to launching his own fictitious universe.

As I leave, rain falls on the other side of the threshold of the brownstone. “Don’t you want an umbrella?” asks a concerned Boullosa. I offer no words, but my shocked face gestures in the affirmative. “Return it to me another day—if not, grant me shelter sometime,” she says as I walk down the stairway that—in the novel—the fictitious author and the inventor met for the first time.

Alina Reyes is a freelance writer born in Chile. For the past three years, she has divided her time between Santiago, Mexico City and New York City, and she is currently writing her first book, a travel journal about this experience. For more details on Boullosa’s work, go to: www.carmenboullosa.net