We are warm-blooded vertebrate creatures. We grow hair, feed our young with milk from our own bodies, have specialized teeth, a neocortex and a four-chambered heart. Our introduction to Mammal and my introduction to the choreographer, Mollie O’Brien, began on stage at Dance New Amsterdam as the lights washed up on four women, three of whom were making a call and response to their spines with forceful but petite gyrations of their torsos. Donna Costello ruminated center stage, like driftwood. The disparate three, Jennifer Dignan, Kate Garroway and Jean Vitrano, paired off into duets, at times slamming shoulders to indicate the beginnings of aggression or claiming of individuality. In MOB’s first few moments of Mammal, I half expected that the work would be a synthesis of our emotional and physical evolutions. Throughout the 40-minute work, each section made similar progressions of movement—slow to fast, soft to hard, circular and small to large and flailing—but the context of the movement was obscure. 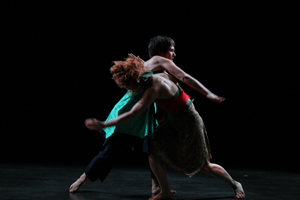 Just as I was starting to doubt that the physicality had any relevance to the title or was defunct of meaning, the dancers went from random “dancerly” intimacy (a portrayal of contact with another body) to a full-breasted embrace between two. Human characteristics began to emerge. But MOB’s intent to show a rise in violence or simple aggression through movement seemed too physically safe and inauthentic. Their approaches to each other were often too choreographed and hesitant. That is until Vitrano’s solo towards the end of the work. Vitrano was wholly absorbed and remote in absolute delirium, rushing at the diagonal in leaps and spirals, panting at its climax. The three other dancers harassed her, name-calling her “stupid”, shouting how ugly her movements appeared and begging her to stop as if her rage humiliated them. The score for Mammal was a bit overworked with ambience or silence, punctuated by an occasional voice-over or the insatiable clip of a song. Yet nearing the dissolution, the score grew in power. Conversations began to take place, finally giving the piece passion, as if it was struggling with something larger than a mere sequence of movement. An enigmatic statement like “It was pointless and no one understood it anyway” or an accusation such as “You didn’t do anything?” inundated the piece with depth.

O’Brien’s characters featured the particulars of being human, commonalities provided by our perpetual six-layered brain aspect, the neocortex. In Mammals we observed the rise of sensory perception, motor commands, spatial reasoning, conscious thought and, lastly, language. O’Brien made a substantive effort to capture these states, but fell short. She could have focused on the areas in which the human being is most engaged, in our lust for making sense of our strangeness. The title demanded more of O’Brien than she gave.

Biggs is artistic director of the dance project Biggs & Company and is pursuing an MFA in Poetry.