For her recent evening-length work, Skint, Caitlin Cook reassembled The Kitchen’s bleacher seating into a sort of balcony so that, at least for those of us in the front and center, the effect was of peering down into a homey rehearsal room—maybe a basement overrun by an angst-ridden teen band in some desolate suburb in the hinterlands. Or the Upper East Side. 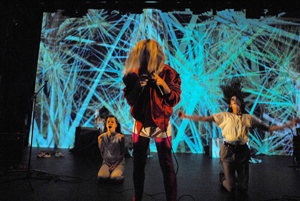 Caitlin Cook and dancers perform her most recent work, Skint, at The Kitchen. Photo by Nan Melville.

Of course, a lot of the artists I know (or maybe just people under 35) seem to spend most of their days feeling like angst-ridden teens: simultaneously slouchy and all worked up in a vaguely creative and vaguely enjoyable way. Not surprisingly, a lot of the art they make seeks to express, fairly literally, this state of existence. Skint did it better than most.

On paper, Cook, Clare Amory, Busy Gangnes, Jessie Gold, Elizabeth Hart, Paige Martin and Emily Powers are overachievers, all with backgrounds in dance and music, some of them members of multiple bands who perform in various choreographic endeavors. In action, or at least in Cook’s version of it, they were slackers, jumping between instruments and activities without attaining, or expecting any particular outcome. They skipped around, they sang, they enacted playground games and ran drumsticks along the walls. At one point, a mop was grabbed and used to vaguely swipe at a corner of one wall. I couldn’t help but think of Brooms, choreographed by one of the heavyweights of task-based choreography, Trisha Brown. This was the same activity, or at least the same ballpark, but with none of the purpose, that choreographers coming out of the 1960s seemed to have when enacting their games. Or maybe that’s 21st-century nostalgia; maybe there never was any purpose.

Skint (I’d guess a reference to the British slang for “broke”) may have lacked an overt “purpose,” but it did not lack rigor. The ambiguous surface masked a sturdy choreographic structure, allowing for improvisations to bloom within a set of rules governing, I would guess, such things as the timing of when to launch a new game, or who should take over the drum set, which sat on a platform, forming the set’s focal point. As the women moved between drums, bass, guitar, keyboard and vocals, they created a constantly evolving band, morphing between styles and moods.

At the same time, they acted as their own groupies, draping themselves over the drums or throwing themselves into head-banging frenzies. With their white leggings and streaky hair, cavorting about in front of Calder Martin’s aesthetically low-tech video projections, they attained a sort of trailer-park chic: simultaneously ugly and beautiful. It all added to a general feeling of female domesticity run amok, which you also find in the work of other young choreographers like Ann Liv Young and Felicia Ballos.

It would take a much bigger leap to loop these women’s work into a larger discussion about feminism, or post-feminism, or whatever. And it probably didn’t mean anything that, on the night I attended, two people left and they were both youngish guys. But it made me happy in some obscure, ridiculous way, and energized, just as the overall work did. Skint was alternately goofy, irritating, charming and depressing. But it was always smart.

Ecologies of Care, Ani Liu’s current exhibition at Cuchifritos Gallery and Project Space, uses the language of technology and material culture to confront the all-encompassing, messy, pressured experience that is contemporary motherhood and thrust it front and center.