In a chapter of Typecasting that explores Western exploitation of indigenous peoples, authors Stuart and Elizabeth Ewen take readers to Chicago’s Columbian Exposition (1893), a “colossal side show… six hundred feet wide and a mile long,” where tourists gawked at exhibits designed to illustrate the immoral, primitive, and hypersexual tendencies of foreign cultures. This fin de siècle “pay-for-view” attraction has much in common with Ewen & Ewen’s latest book. An exhaustive search for the origin of contemporary stereotypes, this five part, five-hundred page tome offers a parade of sensationally offensive injustices committed since the dawn of colonialism. Just as Columbian Exhibition tourists wandered slack-jawed through Chicago’s side show, so too will current readers wander through Typecasting, drawn helplessly along by their prurient hunger for displays of callousness and barbarism. But the Exhibition and the book spring from very different sources—the Exhibition’s attractions are products of exotic fantasies and misconceptions about foreignness, while the appalling chapters in Ewen & Ewen’s book result from ten years of painstaking historical research. For this reason, the Exhibition fades from memory, but Typecasting leaves an indelible mark on its audience, inspiring disgust, shame, and a frustrated longing for social progress. 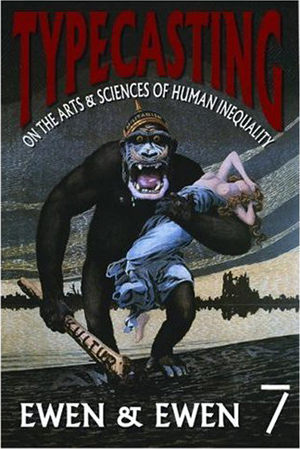 In its first pages, Typecasting discusses the powerful men that contributed to the establishment of Western prejudice and stereotype. Employing numerous historical documents, Ewen & Ewen examine the flaws of influential historical figures, reminding us to look beyond hagiographic depictions of much-loved writers, artists, and philosophers, to see fallible human beings. Their examination of Thomas Jefferson, for example, recalls his shortcomings as a champion of egalitarianism, citing a document in which he weighs the relative value of blacks and whites by comparing their physical appearances: “The circumstance of superior beauty, is thought worthy [of] attention in the propagation of horses, dogs, and other domestic animals,” he writes, “Why not in that of man?” Though most readers understand that Jefferson’s visions of freedom included only white men—that he owned slaves until his death, that he sired children by a black mistress and freed very few of them—his words remain shocking. Furthermore, we learn that William Blake also supported the development of racist and classist prejudices despite his apparently “democratic leanings.” The esteemed poet and artist provided hundreds of illustrations for Johan Caspar Lavater’s Essays on Physiognomy, an instructional piece that encouraged readers to judge passersby at a glance by assessing their racial background, stature and facial features. Ewen & Ewen assure us that even the greatest visionaries and intellectuals fall prey to social conditioning, that they can not (and do not) transcend their cultural contexts as more flattering historians might suggest. Typecasting argues that a human desire to stereotype and simplify tempts even the most progressive minds.

More importantly, however, Ewen & Ewen discuss the common man’s unquestioning acceptance of stereotyping traditions. Tracing current prejudices to their origin in the eugenics movement, the authors describe America’s brief enthusiasm for human pedigree contests, and the subsequent popularity of scientifically sanctioned racial discrimination. In the 1920s, at county fairs across the nation, The American Eugenics Society encouraged families to submit records of their lineage for review, giving awards to those that best fit eugenic standards of racial purity, physical stamina, and Nordic beauty. Wealthy and working class citizens alike applauded these contests, accepting them as “newsworthy” events deserving coverage in “leading state papers” and smaller “farm and home papers.” If we imagine that academic circles remain unaffected by such popular movements, Ewen & Ewen convince us otherwise. They inform us that, by “1928, eugenics was a topic in 376 separate college courses, which enrolled approximately 20,000 students. A content analysis of high school science texts published between 1914 and 1948 indicates that a majority presented eugenics as a legitimate science.” The authors leads us to wonder if any man—visionary, commoner, farmer, intellectual, academic—can escape the influences of the social discourse in which he is immersed. We ask: Is it possible to resist cultural conditioning?

For Ewen & Ewen, the answer to this question is “yes,” and their book provides the tools necessary for such resistance. Rather than appealing to the reader’s emotions, or attempting to undermine social boundaries by inspiring empathy, Typecasting focuses instead on training readers to disrupt the processes that create and enforce stereotypes. For, as Elaine Scarry writes in “The Difficulty of Imagining Other People,” cultural shifts are not sparked by “reflection upon and identification with people different from oneself,” but by active attempts to reshape social structures. Typecasting urges its readers to become more than passive recipients of cultural knowledge, to change their community by resisting idées recues. To this end, Ewen & Ewen examine institutions that played key roles in the production of American/European stereotyping systems, leading us to recognize such institutions in contemporary society. They refer, for example, to turn-of-the-century natural history museums, which were allowed to shape Western notions of foreign nations, despite the clear bias of their exhibits. Ewen & Ewen remind us that the founders and curators of such museums were not academic experts, but “amateur private collectors, many engaged in colonial ventures” abroad. They ask us to seek the bias of today’s cultural arbiters, to listen with a critical ear. They present extensive proof that an apathetic public, a public free of skepticism, can easily be led astray.

If Typecasting flounders at times, it is because the writers (under the “authorial sobriquet” Ewen & Ewen) attempt to encompass too much in one volume. For, though every word of their sociopolitical inquiry commands attention, their frequent tangential forays into optics, camera mechanics and film magic seem unnecessary and distractingly out of place. As the title page implies, Typecasting anchors itself by asserting that “the eye that sees is not a mere physical organ but a means of perception conditioned by the tradition in which its possessor has been reared.” When Ewen & Ewen drift from this assertion, the reader begins to feel alienated and somewhat lost. Still, the book delivers exactly what it promises. It provides a fresh analysis of stereotypes and their origin, and prepares the reader to join a public discourse “based on knowledge, understanding, and a belief in the possibility of egalitarian community.”

Call them what you will—autocrats, dictators, totalitarians, and all those who aspire to become as such—the moment that we are going through is forcing those in power to address the systemic racism that has never been resolved in our country’s history, or to put it more factually, the perpetuation of white supremacy.