Some books are meant to be read on a day off, in the country or in a park, that make vivid the pleasure of a warm breeze and nothing to do. Then there are those that reveal and make vivid the parts of the days that are impossible, vicious and dark, that lighten the load by exploring it rather than distracting from it. James Lewelling’s debut novel This Guy rests squarely in the latter. It is not a congenial work, but it avoids alienation so deftly that one barely notices when it becomes consuming rather than maddening.

In This Guy, James Lewelling sets us on the path of a latter-day Daedalus, running headlong after a Minotaur that we cannot believe exists. So determinedly does he pursue the figments of his own imagination that he, perhaps, wills them into life. From the relatively minor neuroses of a man living and existing very much alone, the story blooms out into full-fledged delirious surrealism. It is a delicious little slight of hand being played here; picture having a talk with the bum on the corner who is convinced he’s being pursued by the C.I.A., only to see him whisked off by men in black suits—and then allowed to follow him down to the depths of Guantanamo. Lewelling, in a strange way, reminds us of the certain satisfaction of being childlike in an adult world, how it felt to believe in something only because you believed it. He goes one better, then, and gives us another satisfaction rooted somewhere before you turned 10: believing in Santa Claus and then being told a story about exactly how real Santa is. This Guy’s illusions are not exactly enviable, but they are terribly fun or terribly identifiable. 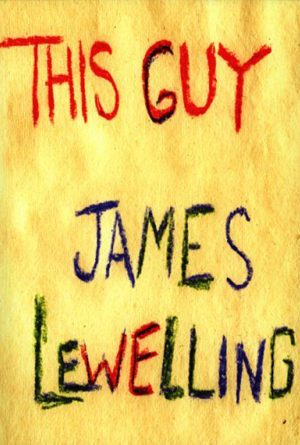 This Guy lives out his days slipping in and out of his “shitty little room,” in a starved shadow-city, where only the Denny’s and the supermarkets are open, without a color spoken of, everything a vision of gray tending to black. It is a descent to beneath bottom.

If the book is difficult to break into, it is because Lewelling relentlessly runs after every frustrating convolution that tempts the urban mind. Messages broadcast from the psychic areas that must, for most of us, be avoided to keep on going. Convolutions that This Guy needs, apparently; a life populated by theories, suspicions and obsessions instead of people. This Guy may dwell, at the start, in the loneliest place, but by the end he has collected—however brutally or accidentally—a collection of companions; he has gone over an edge and he is loving it.

If there is a reason that This Guy takes to an urban environment like a cockroach to a dark corner, it lies in Lewelling’s verbal relentlessness. For a very small volume, each paragraph teems and bulges with a linguistic claustrophobia. Even as Lewelling constructs sentences of twining, branching strangeness, it is not beauty, exactly, that he seems to be after. What he produces is the feeling one gets riding alone on the subway at peak rush hour. Viciously alone, viciously crowded, everyone so desperate to avoid touching their fellow passengers that all that can be seen, sensed, is the spaces between bodies.

It is as the book begins to open outward and we no longer have to race to keep up with This Guy’s existence, that we are swept into the clamor just as he finally is. Only then does the drama of events supercede the madness of clamoring non-events—and though the language never relaxes—the bottom is broken through and instead of more dense darkness, there is a weightless land where everything holds equal sway. Torture cries just as loud as groceries. When something actually begins to happen in This Guy’s life, he tilts at the giants just as if they were windmills. What an unexpected relief to be delighted by darkness, charmed by impossible neuroses and surprised by This Guy in his slim but certainly not modest novel.

The film begins with a misleading suggestion of violence, which, when paired with the immediate verbal clarification that there actually isn’t any, serves as a witty meta commentary on the place of Decision to Leave within Park’s typically violent filmography.