When Jennifer Natalya Fink was growing up, she repeatedly questioned her family about why they’d trekked from Lithuania to Brazil to the United States. Each time she asked, she got a different story, but the tales invariably included a girl, a man, a hat, a monkey and a gun. “In my grandmother’s telling, historical and philosophical questions were always mixed-up with the mundane, romantic, emotional and girly aspects of life,” Fink said in a promo interview for the book. 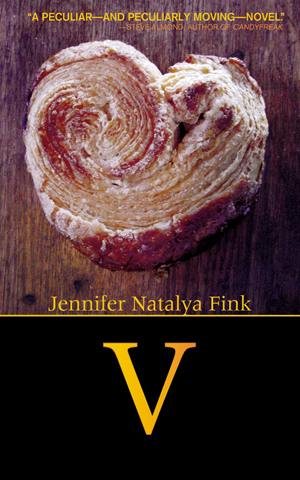 Sadly, Fink never received a satisfactory answer to her family’s migration saga; perhaps that’s why she penned V. This surreal and touching novel, set in the 1940s, incorporates the characters of her grandmother’s account into something wholly of her own imagination. In it hats talk, an errant monkey fleeing the vanishing rainforest ends up in a middle-class Jewish home, a gun reflects on life, and God barks orders and offers pithy observations.

The protagonist is a willful 13-year-old girl who has changed her name from Elisabeche to Veronica in homage to two Catholic saints. One of these namesakes reportedly licked spiders off a filthy floor, an act of contrition that heartily appeals to the Veronica. The other, a Jerusalemite, let Jesus wipe his face with her veil as he bore the cross to Calvary. Images of Christ, nails embedded in skinny flesh, blood flowing from a crown of thorns, obsess her.

What’s more, sacrifice and suffering fascinate Veronica, and she begins to starve herself. Veronica’s actions are especially troublesome because she is Jewish. While V is not an overtly political book, it is obvious that Veronica has internalized the era’s virulent anti-Semitism, and whether consciously or not, is struggling to negate her heritage by immersing herself in Christian piety.

Her mother, meanwhile, is so busy mourning the sudden death of her husband—Veronica’s father—that she seems oblivious to her daughter; her sadness (or is it self-absorption?) leaves little room for the grief of others.

When she meets Henry Baxter, a middle-aged Brit on assignment in Brazil, she is inexplicably drawn to him. While she ostensibly hopes that Henry will be her converso, brought to God by her example, Henry’s desire blurs the line between the prurient and the parental. Yet like Veronica, Henry is in mourning; his marriage has ended and someone—is it a child, a sibling or a best friend? —has died.

Although neither Henry nor Veronica get everything they want, their interaction sows the seeds of a redemptive friendship. Unlikely as not, theirs is an oddly powerful connection.

As if these plot elements weren’t enough, throughout the novel, hat, a pretentious status-seeker, cavorts with gun and monkey, while voice presents godly mandates for saintly living. Their third-person interludes give readers a window into the socio-political climate of post-World War II Brazil. Although the book’s denouement is unsatisfying—the story seems to end abruptly—Veronica’s struggle to define herself is beautifully wrought. In addition, magical realism allows the animate and the inanimate to converge, providing a way for the novel to assess the impact of material possessions and ideas on human development.

V is an ambitious, and generally successful, effort. It is provocative and weird, tragic and affirming, like Fink’s grandmother’s story. Once again, there are no easy answers, no way of knowing the truth behind the fiction.

Venceremos: Resisting the Rise of the Far-right in Brazil

In October 2018 fifty-five percent of Brazil’s voters chose to elect a far-right president. It is unsurprising that a country shaped by colonial thinking, marked by a horrific history of slavery, and mostly controlled by white oligarchies would adhere once again to such forces.

In Brazil, Tarsila do Amaral is a standard part of elementary school curriculum. Her work illustrates history books, literature exams, and is poorly copied in art classes. There, she is such a beloved and noteworthy figure that her surname is unnecessary.