A poem is not a role model.
So this poem won’t

Celebrity athletes, direct-mail promo copy, popular sitcoms, even business lunches—these are the deliciously weird found objects Sala, a veteran of the advertising world, chooses to dissect, in all their unintentional irony. A script for a TV commercial markets a poem as if it were a car. Characters from “The Dick Van Dyke Show” are ruthlessly psychoanalyzed.

Sala enjoys exploring the interplay between media, pop culture, and poetry. “Sometimes, I’m wondering about what would happen if modernist poetry were translated into today’s world; for example, what if you still had something like imagist or objectivist poetry, but the images and objects were all from pop culture and media (instead of ‘nature’)?” he said. “I also wanted to experiment with writing political poems that had an almost agit-prop quality.” 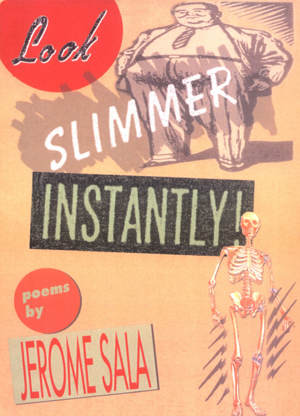 Sala describes the book’s title as connoting “the ‘quick fix’ that advertising promises,” and suggesting that “poetry could be utilitarian in some unknown, crass way.” Despite the poems’ often satirical jabs, however, Sala hopes that “I never come off as being above the material. I’m trying to portray a mind that’s just as brainwashed as anyone’s by capitalist myths.”

Yanked out of its natural habitat—the glossy magazine page, the billboard, junk mail—and laid out in bare, minimalist lines, the feel-good marketing-speak of our capitalist world becomes a commentary on our so-called socioeconomic “values,” as in the poem, “The New School Catalog”:

on the cover we are promised
“a world of ideas”
you need a world
I guess
in a “global economy”
a nation
or neighborhood
would not
do the trick
and what is the trick?
the start you want
on your new career
the one
the global economy
forced you to think about
when your boss
smiled
and started talking
about downsizing?

What will appeal to readers (discriminating readers, if one were to think in ad-copy terms) is the coolness with which Sala deconstructs our familiar entertainments and creature comforts; the effect is both unsettling and hilarious.

One does not expect to be moved by work from a post-post-modernist, but Sala is not alone among his contemporaries. Sala is now in process at the NYU American Studies from which Stephen Paul Miller earned his PHD. Miller, an English professor at St. John’s University, titled his PhD dissertation: Three Self-Consuming Mechanisms of the Mid-Seventies: John Ashbery’s “Self-Portrait in a Convex Mirror,” the Watergate Affair, and Jasper Johns’ Crosshatching Paintings. Skinny Eighth Avenue (Marsh Hawk Press, 2005) employs wordplay and stream-of-consciousness writing to wrestle with poetic and human concerns. 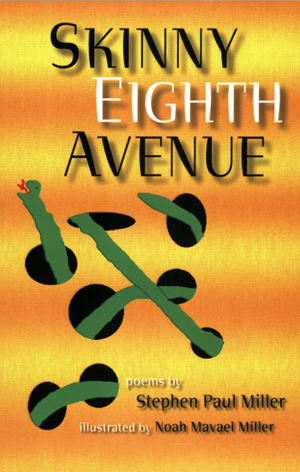 The first poem in Skinny Eighth Avenue, laid out in rambling, jagged lines, leads the reader to expect a language poem, but is in fact surprisingly confessional. Forgotten discount coupons to Sea World necessitate a trip back to the hotel to retrieve them, sparking a meditation that is by turns bemused and passionate, and that ranges over a vast emotional landscape populated by Reaganomics, the Holocaust, The New Deal, Iraq, suburbia, and the politics of academia, but also ’60s nostalgia and the poet’s relationship with his son:

Why are we in California anyway? To me California means
back to the Garden—
but more immediately I’m here
to cheer my son.
Risa tells me her sister
has what my wife has
and her nephew Ray
thinks Risa’s his mother.
On the highway,
I point at a Red Lobster
and remind Noah
how Mommy liked
going there with us.
He doesn’t want to remember.

Sometimes Miller’s objectivity and tenderness conflate in one brilliant line; in the same poem, he declares:

Noah’s [sand] castle is the only one with formal
integrity

Noah and I have collaborated

on a marvelously imperfect meta-vacation.


External forces come into play in the political poems. “I wrote ‘Iraq Iran the Clock’ the day before the U.S. started bombing Iraq, going on the assumption that this was going to be a disaster,” Miller said. The voting debacle of the 2000 elections is also a recurring theme.

According to Miller, the book’s title is informed by the contradictory notion of a wide avenue being “skinny,” setting up a dynamic tension that drives the poems. Also, he noted, “the number eight turned on its side is the symbol for infinity,” and the limitation connoted by “skinny” contrasts with the notion of limitlessness.

The Ferlinghetti-esque manner in which Miller’s language trails off into flip asides and non-sequiturs—as if the speaker were becoming choked with emotion when he finds his experiences and memories confounding coherent speech—is uniquely affecting. Miller has redefined the confessional poem, and it’s all about juxtaposition, baby.

Carol Wierzbickiis the editor of the forthcoming anthology, The Worst Book I Ever Read.