When the blackbird flew out of sight,

It marked the edge
Of one of many circles.

Wallace Stevens,
“Thirteen Ways of Looking at a Blackbird”

“In an age of bare hands” is the first line in District and Circle’s first poem “The Turnip-Snedder.” It is the book’s first circle, reminding Heaney readers that his poems are handmade. This was his intention at the start as arrived at in “Digging.”

“Between my finger and my thumb

the squat pen rests.
I’ll dig with it.”

In that poem Heaney watches his father dig in the family potato patch and remembers his grandfather’s prowess at cutting turf. Heaney came to see “Digging” as “the first poem I wrote where I thought my feelings got into the words, or to put it more accurately, where I thought my feel had got into words.” Heaney’s poems are marked by a physicality, a built-by-hand feel. 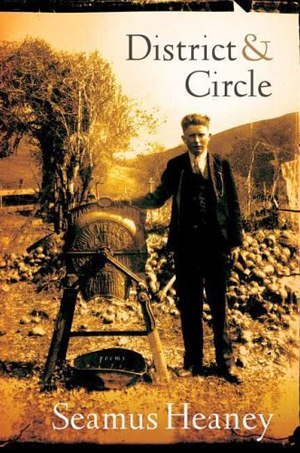 Things—a 56-pound iron weight, a hazel stick, his mother’s tin kitchen scoop—have a special claim on his imagination. In District and Circle, the turnip-sneeder, a Boston fireman’s helmet, Wordsworth’s ice skates, a blacksmith’s tools and a harrow-pin connect readers to a large circle of preoccupations. There is a type of poem in which the poet looks hard at an object and free associates. But the things Heaney focuses on have been in him a long time, so long that they emerge as freestanding and imagined. His is a deeper response than observation or attendance.

Another circle: Heaney’s return to the world of his childhood. This is a pole star in his work. The simplest physical labor that fascinated him as a child continues to do so. Here a man swings a sledgehammer, while the barber’s “snickering scissors” cut hair and at the butcher’s a rib roast is “plonked down, wrapped up, and bow-tied neat and clean.” If childhood is the writer’s capital, Heaney’s has lasted him longer than that of most poets. For him it seems a known, bottomless world.

Were Heaney an American he might find William Carlos Williams’s admonition “No idea but in things” an irresistible foundation on which to support his work. In his Nobel Prize lecture he spoke of poetry as being “true to the impact of external reality.” It is this impact of things and actions absorbed and set out that stays with the reader. In the lecture, Heaney hoped he was not “simply fetishizing—as we have learnt to say—the local.” Perhaps he said this to make less point and round off his emphasis on his poetry’s rootedness in his childhood. District and Circle continues his reliance on the local. It’s in the word district, which I take to mean Heaney’s jurisdiction, the territory where his imagination is free to operate, late 20th century Ireland and outward. He doesn’t need to say that for him the local is universal or that there is, again in Williams’s phrase, “a universality of things.” This is implicit. Heaney’s vision is not limited but released by the man bringing down the sledge so “the staked earth quailed and shivered in the handle.”

District and Circle returns by a kind of inner underground (the subject of the jangling, shuddering sonnet sequence of the book’s title poem) to the “Tollund Man,” another sonnet sequence, and in the book’s final poem, the accidental death of his younger brother. He first wrote about this in the poem “Mid-Term Break” and here the circle widens with “the Blackbird of Glanmore,” widens like “the ripples” he invoked in his Nobel lecture, “that rippled in rippled out across the water in that scullery bucket fifty years ago.”

At its darkest in “Anything Can Happen,” “Anything can happen, the tallest towers/Be overturned, those in high places daunted” Sub-titled “after Horace, Odes, I, 34.” for American readers this poem will be about September 11th. Heaney knows what Horace knew: that there is no power great enough to avoid fate. Our leaders, drunk on a weird brew of American virtue and Christian Armageddon, refuse to understand experience’s first lesson. Heaney’s poetry constructs a concrete reality opposed in every word and syllable to what is fake in spirit and imagination. Contrast his local view with the talking “Texan,” made for television localisms of our mendacious president.

Heaney knows that anything can happen, that “a little stillness dancer” can be thrown from life by a car bumper, and he knows too that poetry even in “the untranscendent music of the saw” renews our response to life. What a poet knows has to be in every word. Heaney’s feel, the way he shapes and fits words—he loves the heft and communicative weight of compound words—to his purpose is a coordination of mind and body. He makes poems the mind grasps while simultaneously holding them the way the hand holds a pen or tool. The experience is of act and aftermath, what happens and continues to happen, wave and ripple registered from the inside out. The phrase “felt benefit” is in this book. It is by no means all that Heaney delivers, but it is bedrock.

n a working-class suburb of Rio de Janeiro, an Ethiopian-born mother hopes that her son will grow up to become a pediatrician. The boy’s Brazilian father, a dockworker, wants him to be a lawyer. The youth’s own ambition, initially, is to play professional soccer.

Hanging Out with Dad

Readers might be more familiar with Mark Leidner’s poetry than with his prose. But the beautiful, bruising hilarity of his poems carries over to his short stories. There aren’t many books I've recommended more often or more strongly than Leidner's 2018 collection, Under The Sea. The present story, “Hanging Out with Dad,” tests universality and particularity—the whatness of a father/son relationship and the thisness of a particular father and a particular son. In all of Leidner's work, a reader can draw general insight from closely-rendered moments, which might not necessarily be a balm for our abundant confusion, but will certainly make it more interesting.