Educating women risks endangering the perpetuation of the species—or so argued Harvard professor Edward H. Clarke in his nineteenth-century bestseller, Sex in Education, or, a Fair Chance for the Girls. According to Clarke, a girl who studied during her period arrested the development of her ovaries, and the result was not only “a dropping out of maternal instincts, and an appearance of Amazonian coarseness,” but also possible sterilization. As far as Clarke was concerned, a population of learned women was “analogous to the sexless class of termites.” 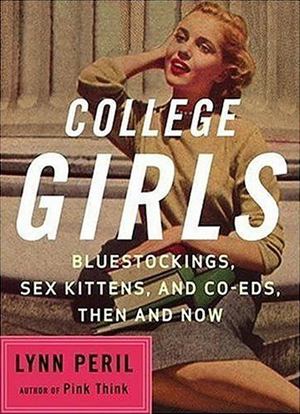 Thankfully, medical misinformation didn’t dissuade too many girls from giving higher ed a try, and now more than a century later we have Lynn Peril’s smart new book, College Girls: Bluestockings, Sex Kittens, and Coeds, Then and Now, to chronicle the obstacles, trends, and events that make up the cultural history of “the second sex” on campus. Peril is as funny and knowledgeable a campus guide as anyone could hope to have—as comfortable discussing fashion as critiquing novels, and ever ready with a well-timed sarcastic aside—and College Girls manages to be simultaneously serious, silly, and inspiring.

The book begins with the graduation of the first female scholar (philosophy student Elena Cornaro Piscopia) in 1678, but the bulk of College Girls focuses on the stretch of time between the mid-nineteenth century, when the first women’s colleges opened their doors, and the early 1970s, by which point not having a Y chromosome in the classroom had become the norm. With chapters devoted to everything from college apparel to sports and dorm rules to husband-hunting, Peril snakes her way through roughly a century of collegiate cultural artifacts, one minute referencing Mademoiselle and the next the campy cover of a pulp novel.

As Peril rightly acknowledges, these mediums may not be the last word on the reality of life in the dorms. Despite being pigeonholed by the media as either a bluestocking (one of those “learned and literary ladies who display their acquirements in a vain and pedantic manner”), a sex kitten going orgiastically wild, or a coed pursuing an MRS degree, most girls were on campus for distinct and individual purposes. That said, popular representations of the college girl readily demonstrate societal expectations about gender roles, at the same time that the actual presence of women on campus has clearly done a lot to complicate these expectations. As Peril sums up, the college girl has historically been a “lightning rod” of sorts, pressing “cultural buttons regarding conflicting ideas about women and education, women and work, women and marriage, and… the nature of womanhood and femininity itself.”

In fact, even as women increasingly began going the university route after high school, social pressures continued to dictate that a gal’s time was better spent perfecting a come-hither glance than skill in algebra. As late as 1944, Helene Deutsch, M.D., warned: “Only exceptionally talented girls can carry a surplus of intellect without injuring their affective lives, for woman’s intellect, her capacity for objectively understanding life, thrives at the expense of her subjective, emotional qualities.” Four years later the family-living textbook Marriage Guidance was published, and the message was even more to the point: “One must admit that men are both physically and intellectually superior to women.”

Appalling and amusingly out-dated material like the above does a lot to keep College Girls moving and interesting, but the book isn’t perfect. Because it’s organized by theme rather than chronology, keeping track of schools and dates becomes tricky, at times making it difficult to monitor the college girl’s evolution. And although Peril spends a little time discussing the unique stresses placed on the students who broke from the standard all-American heterosexual, white, Christian mold, it would have been great to hear more about the minority experience of university life—and the ways in which it complicates the cultural portrait of the college girl.

Minor flaws aside, reading College Girls makes it easy to appreciate the immense progress women have made. And sure, girls have come a long way from the days when they weren’t allowed to play basketball because it might jostle their uteruses out of place (wrote Dr. William Lee Howard: “Such a girl may have strong arms in which to carry a baby, but the chances are that some other woman will have to give her the baby to carry”). Yet, it would be hard to forget Harvard president Lawrence H. Summer’s inflammatory 2005 remark that the dearth of women in math and science was perhaps due to “innate sex differences.” For that matter, between the popularity of Abercrombie and Fitch and aerobics courses that teach pole-dancing and stripping, it doesn’t take much imagination to envision the type of erotic college-girl clichés a person from 2060 would find when looking back over our own pop culture debris. Hopefully, that future gal will find these clichés as archaic as we find the ones in College Girls.

In her debut US solo show, Re-Education at SculptureCenter, Berlin-based artist Henrike Naumann explores the power of design to disseminate specific messages and align with larger ideologies.