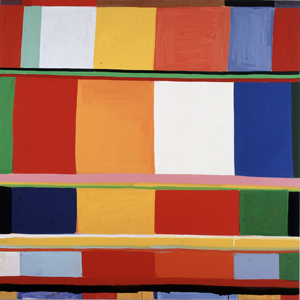 When contemplating Stanley Whitney’s matter-of-factly painted geometric abstractions, we should keep in mind these words of Ad Reinhardt: “all art is political.” The reason we should remember Reinhardt’s statement is because Whitney is an African-American abstract painter who makes no overt connection between the author and the self or, in academic parlance, his identity. In doing so, he travels one of the least traveled roads in postwar American art in a way that is both extremely engaging and highly revealing of, among other things, the problem with literalist and reductive readings, which are ubiquitous. Whitney’s politics are direct and in your face: he is an abstract artist standing apart from those who declare painting is dead; he rejects not only the notion that the “I” can be defined by others, but also all hint of narrative, as well as any currently popular agenda. In counterpoint to the theorists who demand that art offer an institutional critique, Whitney’s paintings embody a critique of those who attempt to define art’s goals and purposes. They do so in way that can only be considered oblique; they never acknowledge the theorists’ existence. That I would say is pointedly political because it is a declaration of freedom from the agenda of others.

At some point in the 1980s, Whitney established the format that he has hewn to ever since, a square ranging from 12-inches to 72-inches. Since 1996, he has generally divided the square horizontally into four unequal bands. The border between the bands is marked by one or more lines, each a single color, generally the width of the brush he uses to make the line. The largest band is the second from the top, and the smallest usually runs along the bottom of the painting. By taking a square and dividing it this way, Whitney establishes a tension between the container and its interior, which he further heightens by filling the bands edge to edge with endearingly painted, almost lopsided vertical or horizontal rectangles, each a single color, that shift in scale and number of rectangles from one band to another. The narrow rectangles pressing against the painting’s physical edges raise the question: Is the image a slippery glimpse of something larger or something self-contained? The top band evokes a frieze running along the top of a wall, while the narrow bottom band of small horizontal rectangles is both oppressed by and resistant to the upper rows. Whitney’s structuring of the bands and rectangles acknowledges gravity’s constant pull, quietly embracing mortality.

Whitney’s palette tends toward unpredictable variations of primary and secondary colors. There can be four or five different blues, reds, oranges, greens, or yellows in a single painting. Other colors include black, brown, and off-white. The progression of color from rectangle to rectangle animates the surface, shifting our gaze and continually changing the parameters of what we are looking at in the painting. Each color demands to be seen in isolation, but this is impossible. We see a field of juxtapositions that never lets our attention settle. Compositionally, Whitney refuses to establish a pattern, which separates his paintings from the current vogue for referencing quilts; these are non-relational, all-over paintings that make a break with what we have come to associate with that model: monochrome or the grid’s guarantee of homogeneity.

One might expect that Whitney, an artist who has worked within a strict set of self-imposed constraints for most of his career, would end up repeating himself, but this is not nearly the case. In each painting he arrives at a synthesis of dissonance and harmony, with neither quite winning out. Other than his titles, which are often derived from rock and roll or jazz (“Great Balls of Fire,” “BlackBird,” and “SunRa”), the artist makes no allusions to popular culture. Whitney works out of a tradition that includes Mondrian, Jackson Pollock, and Alma Thomas. He is a fiercely independent painter who makes no attempt to charm or impress the viewer, and in that regard is the peer of Bill Jensen and Harriet Korman, self-determined abstract artists who have never been swayed by fashion.

Trump, the American Dream, and the Frontier

David Graeber once postulated that the reason conservatives hate Hollywood is not just because of the film industry’s sanctimonious liberalism but because this liberalism is disseminated by an industry that is profoundly nepotistic.

American Standard is the product of a resolutely original mind and represents an expansive view of the nation in the moment—it is exacting in its technique and sharp in its cultural commentary.