Wall of Light
The Metropolitan Museum of Art 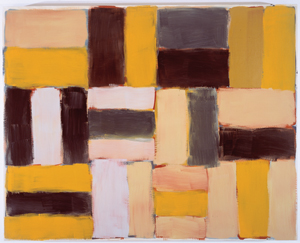 Sean Scully has been making unfashionably large, abstract oil paintings for over twenty years. His current exhibition, Wall of Light, is no exception. Begun in 1998, the paintings range in size from the imposingly large to the intimately small, but rarely anything in between (with the exception of several watercolors and prints). The centerpiece of the show, filling the Metropolitan Museum’s entire Mezzanine Gallery, is a set of eighteen monumental oil paintings. Instead of the familiar Scully fare of bands of pigment and inset canvases, these paintings are characterized by muted earth tones in richly layered, soft-edged stacks of vertical and horizontal bars that span the entire surface of the paintings, edge to edge. Scully refers to these elements as “bricks”. An atmospheric “light” spills out from the spaces between the bricks, which is actually layer upon layer of intensely-hued underpainting peeking through. At times a burning red/yellow and at others a somber indigo/gray—either way, it creates the painted impression of light seeping through the gaps in a loosely-stacked brick wall, and, as with a physical wall, it poses the question–what’s on the other side?

In 1999, a year after he began the Wall of Light series, Scully wrote an essay on Mark Rothko, called Rothko: Bodies of Light. In it he describes Rothko’s compositions as “organized” with “blocks stacked one on top of the other,” as if he were describing his own Wall of Light paintings. He characterizes Rothko’s color as “found” by working the surface so that the picture’s chromatic character and luminosity are inseparable from its texture,” much the same way the color in his Wall of Light paintings is “found” through working, reworking, adding, and removing paint, resulting in a luminosity of layered pigment. However, this is also a fundamental difference. Rothko’s luminosity is thin and expansive, radiating through a profusion of pulsating color’s. As we gaze into this light we are confronted by floating, celestial forms whose blurred edges resonate in a disembodying spatiality. They imply the infinite as they hover between presence and absence—physical body and body of light. In contrast, Scully’s luminosity is layered and dense. His blocks of paint are thick and physical, serving as barriers, walls from which light struggles to escape. As we gaze into his bands of muted pigment it is not an infinite expanse we see, but a wall blocking our access into that expansive environment. It is not a complete blockage, though, because we are still given a glimpse of something spilling through. The pulsing light we see belongs to Rothko; it is his celestial radiance that is hovering just beyond the barrier.

Scully needs this light. It becomes the mortar holding his paint-bricks together, giving new life to his canvases. The juncture at which Scully’s muted colors fuse with Rothko’s radiant light imbues his canvases with spiritualism—that border where, through a medium, the dead communicate with the living. This is a bold move on Scully’s part, especially in an intellectual climate in which God’s death is a given. If we read these paintings through that lens, his actions could easily be taken as ironic—he chokes off Rothko’s spiritual expanses as an anti-heroic gesture. It can also be taken as nostalgic—he walls up Rothko as a protective measure, smothering his celestial forms in a wet blanket of sincerity. I don’t see Scully engaging in either of these reductive modes. What he does is embrace Rothko’s spirituality from a distance by placing it behind a wall, yet still allowing us small glimpses of its brilliance. This is a mysterious position, one of spirituality without dogma, open to interpretation and judgment.

In doing this Scully makes an earnest attempt to advance his own practice through an engagement with painting’s past, and his own. Earlier in his career, Scully set smaller canvases within larger canvases, turning the smaller ones into a sort of figure within a ground. This avoided the traditional figure-ground relationship within painting yet still entered its centuries-old dialogue. In his Wall of Light paintings, Scully enters this discourse in a new way, by reversing the relationship. He foregrounds the traditional background within a painting, i.e. the wall, and thus makes the wall a figure, a body, which in this case shelters a spirit. By fracturing this body into non-symmetrical separate components, its physical composition loosens, quakes and shifts in a shivering movement. It is also a way out of stultifying formula. Each canvas contains a spirit that has allowed Scully to enter an art historical dialogue with painting through painting. He doesn’t relive Rothko’s heroic moment nor does he criticize it. He uses it to generate new work. It is this unfashionable approach—one that speaks of the spiritual heritage within abstraction yet lies outside the reductive modes of irony and nostalgia—that is worth considering.

Sean Scully: A Wound in a Dance with Love

A leading champion of contemporary artmaking, Sean Scully has come to project his image of an artist as a formalist conundrum, as intimated by the above metaphor that exudes a sense of pathos.

Sean Scully’s work has a consistency that gives it a heightened level of energy reflected in both its convincing visual impact and the artist’s diligent production.

Here the boundaries of form and content dissipate, as medium and message are rendered interchangeable, undermining the closure of meaning and anticipating those interpretations that emerge from the perception and intuition of the observing subject.