The International Center of Photography 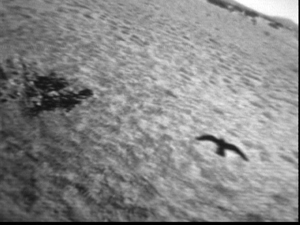 A peculiar kind of evidence is offered up in Sam Easterson’s videos and photographs of birds—be they falcons or pheasants, turkeys or ducks—as well his videos of an astonishing range of other animals. At first glance, the videos seem to anthropomorphize the animals they represent, but as the baby chicken in one video swivels its head and uncomprehendingly eyeballs the tiny camera mounted somewhere on its upper back, one realizes that animal intelligence represented in human terms is not the payoff. Rather, it’s the chasm between human and animal perspectives. Two exhibits this fall feature Easterson’s work: a solo show of bird videos at Daniel Cooney Fine Art in Chelsea and a 12-video installation of 11 animals and one plant at Ecotopia, the International Center for Photography’s Triennial.

The effect of flying, hovering, running, swimming, floating, galloping, foraging or hopping along with an animal for approximately one minute (or until the camera falls off) is fascinating, but it’s nothing like a natural science due to the unimpeachable, and hilarious, acknowledgments of the apparatus by the animals themselves. A mama cow licks a younger cow’s face before licking the camera mounted above the calf’s nostrils. A herd of sheep fretfully stares and then bolts each time its photographically-outfitted member advances toward them. At best, we’re experiencing a cow, sheep, wolf, duck or tarantula from the point of view of a technological parasite—an artificial point of view in terms of animal subjectivity, if there is such a thing. Upon recognizing this nuance, you are freed up to concentrate on other things, for example, the search for food as ultimate priority: armadillo-, buffalo-, wolf- and pig-cam are perhaps the most adept at revealing this minute-by-minute focus in terms we humans can understand.

To cinematically ride on the snout, back, antlers or under the wing of an animal or insect puts you in an ecological frame you don’t normally inhabit: clumps of weeds, rocks and dirt, or muddy streams and riverbanks become your widest horizon in some of Easterson’s videos, unless of course you’re on something that flies. Then, a dizzying convergence of height and motion reigns, along with the breathtaking realization that this is where another living organism spends most of its time. The videos assert this reality over and over again, and therefore provide a different appeal than footage produced by, say, a camera mounted to a weather balloon, or on a robotic moonwalker. Each video is different from the next in subtle and unpredictable ways that are well beyond Easterson’s control once the camera is in place. Riding with an armadillo imparts the unusual sensation of attacking dried, crackling outposts of tall grasses with a flak-jacket-like body. Simply nosing around doesn’t do it. Peripatetic trampling is the preferred method of movement.

Easterson’s bird-cam videos echo an apparent obsession in the art world with imagining, designing, and building things with a bird’s point of view in mind. Natalie Jerimijenko, the California-based artist-engineer, for example, in a follow-up to her ingenious pigeon-inspired objects and consumables in this spring’s Whitney Biennial, recently created an aviary of human proportions on the rooftop of Postmaster’s gallery in New York, where pigeons and smaller birds were videotaped engaging in various forms of “work” and “play” to test their patterns and preferences. Both Easterson and Jerimijenko’s projects point to the difficulties in conventional natural history studies of noting where “natural” habitats and behaviors end and the human world begins, if in fact they can be separated.

Easterson’s work also shares a sensibility with at least one of his Ecotopia cohorts, Catherine Chalmers. In her video, “Safari,” Chalmers reveals the challenges faced by a large cockroach as it navigates an artificial jungle of plant and animal life before being eaten by an amphibious giant. Again, we are thrust into a scale and set of horizons very foreign to us. Each encounter with another creature raises concerns of life-and-death proportions. Chalmers’ longer, more narrative format investigates a conceptual position that Easterson’s improvisational camera performances do not. Yet seen in the context of the same exhibition, Chalmers’ beetle-as-protagonist and Easterson’s reality TV-like animal-cams make good fodder for reflecting on the top-of-the-food-chain perspective we humans take for granted.

In the Ecotopia exhibition, Easterson moves beyond the animal realm into the vegetal, where his genius for a cannily-placed camera can perhaps best be seen: inside a rolling tumbleweed.

Lynn Love, who began her writing and editing career at the media arts monthly, Afterimage, writes about science, the arts and culture as a freelancer in New York City.

At this point it may be obvious to say that history is usually written by the victors, but other histories are also always being composed, and there are innumerable forms this writing can take. During the past forty years, Hock E Aye Vi Edgar Heap of Birds (Cheyenne/Arapaho) has created work addressing the ignored and suppressed histories of Native people in North America.

Never-before-published intimate portraits of nude men the Zurich-based photographer invited into his makeshift studio, located within the apartment he shared with his mother, show the studio as a refuge for homoerotic desire away from relentless Swiss normativity.