Each day seems to find more curators bemoaning the ability of commercial galleries, with less bureaucracy and more financial clout, to create strong shows with speed and efficiency. The frieze art fair proves and disproves just this. The achievement of Amanda Sharpe and Matthew Slotover should not be underestimated; magazine publishers turned art fair magnates, they have created what feels like the biggest, weeklong, art world hangover. The fourth edition of the frieze fair may be in itself a successful commercial event, but its most important effect isn’t the evidently large amounts spent on artworks or even the over-drive that the London art world throws itself into, but the reinvigoration of our cultural scene as a whole. 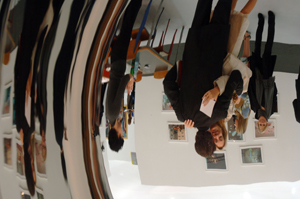 Located in Regent’s Park and housed in a tent designed by architect Jamie Fobert, this year’s event includes curated events in all genres: artists’ cinema, music, a sculpture park, radio station, lectures, and, of course, the Frieze commissions. Of these, Mike Nelson’s project felt the most haunting.

Open a seemingly innocuous door and you discover, instead of a storage closet or maintenance room, a dim red-lit corridor. Nelson has in fact created a series of interconnecting rooms linked by several long corridors. (Reportedly, part of the fair was built to accommodate these labyrinthine, creepy spaces.) The rooms are outfitted like darkrooms, filled with photo developing equipment and, hanging from the ceilings, photographs taken during the installation of the art fair.

A star almost straight out of art school, and a Turner Prize nominee (2001), Nelson’s vision is a complex interplay between an imagined narrative and its physical installation, often inspired by literature, sci-fi or pulp fiction (J.L. Borges to H.P. Lovecraft), in which he invents characters and then creates their environments. Thus these shambling relics embody the stories of their own ghosts (see my London report of July/August 2006), though the simplicity of the idea of using photographic documents to this end does not have the resonance of his usual “narratives,” despite his intent to “create a sense of absence and space.”

Though he is highly regarded and a recipient of many commissions, Nelson is not the most marketable of artists. He in fact sells few pieces and readily admits that the scale of his work, and probably its complexity, makes it highly uncollectible.

At the other end of the spectrum, YBA alums Jake and Dinos Chapman, in their typical teenage “bad boy” style, offer critique, commerce and caricature simultaneously—or maybe we should say a caricature of commerce—at its finest. Furiously at work in a wallpapered booth, like your typical street artist, the Chapmans would paint a caricature of any punter willing to pay the required £4000 pounds (+tax). Not cheap for a caricaturist, but relatively inexpensive for a YBA. It’s quite the deal for the collector, as the portraits would then be added to artists’ Tate Liverpool mini-retrospective later in the year. The quality varied from humorous to Picasso-esque odd, in true street caricaturist style, albeit in oil paint. The olfactory aura of the studio wafting from the booth offered a funny sort of nostalgia amid so many “postconceptual” objects. Rumor is that the boys found it hard work painting portraits from start of day to end.

Perhaps less hard work, and maybe less cynical, was Mika Rottenberg’s video and “performance,” “Chasing Waterfalls: The Rise and Fall of the Amazing Seven Sutherland Sisters, Part 1.” The Argentinean artist and winner of the Cartier prize presented a feature film-quality “documentary” about seven sisters renowned for their long, flowing hair. The video itself embodied a strong sense of femininity, not just from the presence of these seven women, but also through its water and nature imagery. Along with the film, a longhaired registered nurse, Susan, was on hand to offer “hair advice”. For a small fee, I was instructed on how to care for and wash my hair, and what products would be useful for reducing hair loss. I was also assured that, even though I would not be able to regenerate my hair, its loss would not make me less desirable. Five pounds was a small price to pay for such a reality check! 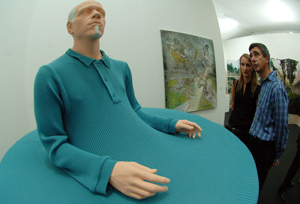 This season the equally trendy Zoo fair, which acts as a satellite to frieze at the London Zoo, has competition from the new Year 06 fair, which is situated in an old school—the Mary Ward House—and organized by the Keith Talent Gallery. With an installation of inflatable giant snowmen titled Snowmen in Love by New York artist David Humphrey and other commissions/projects, Year 06 comes across as the best fair of the handful. Its small spaces allow galleries, singly or in pairs, to project a sense of their personality with what were more like group shows than art fair displays.

For myself, the star of this very long week has been the young Nottingham space, Moot at 06. Their “stand” had the feel of an art school collective—somewhat like the Keith Talent Gallery’s ethos. Matthew McQuillan’s simple assemblage in which a photo of twin plastic beer cups is attached to a real upturned beer cup seemed to sum up my week, while Mark Harasimowicz’s teenage-style drawings of animals combined with geometric patterns on sheets of lined note paper were the most appealing. Not to mention the odd sculpture created with a vibrating foot basin filled with ink. Rather than finished products, what I found here seem to be creative and witty thinking. 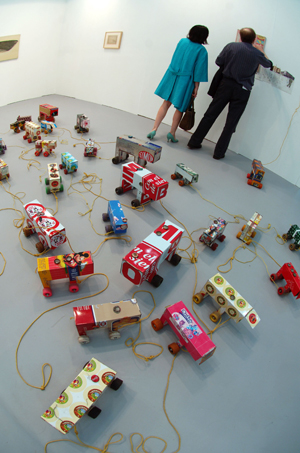 The Secret Theory of Drawing at the Drawing Room
October 5–November 19, 2006

For artists the sheer commercialism of art fairs must be demoralizing, though if you find yourself on a handful of stands and actually make some sales, it could be a huge ego boost. One show that must offer some balm to this rabid commerce is The Secret Theory of Drawing, curated by Caoimhin Mac Giolla Leith. A familiar critic about the international scene, Mac Giolla Leith’s usual cool intellectualism is everywhere to be found in this show. The title comes from a misheard statement that Mac Giolla Leith is supposed to have made to the painter David Austin, a close friend, and thus Austin’s small, simple, black banded, abstract gouache is the first drawing one finds upon entering the space.

Mac Giolla Leith argues that instead of the “medium as gestural, expressive, more or less instantly communicative, and complete in and of itself,” which is the currency of the moment, his show instead hopes to evoke “displacement, indirection and obliquity…” It also seems to offer the idea of drawing as a line; from Ceal Floyer’s ‘&’, comprised of joined vinyl characters (‘&’) to form a decorative frieze along the top of a gallery, to Bojan Sarcevic’s very Tuttle-esque linear sculptures made from string, brass wire and watercolor, to an Ellen Gallagher canvas covered with drawn paper. What is evident in the Irish critic’s selection is an idea of line as a structuring device resulting from a conceptual process. These are not artists with an organic, “spontaneous” process, but rather more intellectual ones. Douglas Gordon ends the show with his “A drawing a day,” a group of envelopes with typed text like “the most beautiful drawing ever unmade.” Maybe there is a drawing inside, or just maybe the text is the drawing. Whatever the case, this work is certainly indirect and oblique, and rare in Gordon’s oeuvre.

If that is not balm enough from the rife commercialism of frieze, then maybe Velazquez will have to offer us some sanity, but then again, there will be the crowds…

The New British Galleries at the Metropolitan Museum of Art

Here, Britain’s engagement with the outside world comes to the fore, and the galleries highlight both the oppression and the wealth brought on by precocious imperialist activity, industrialization, and commercial enterprise.

Suffocation of the Young: A Report from Brooklyn on Schooling, Childhood and Mental Illness Today

At some point during the workday, you may have considered that your role in creating a product or service somehow plays an important part in sustaining the world we live in, even if that world leaves much to be desired.