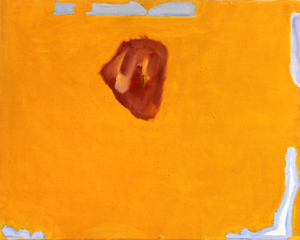 Much is made of Raoul De Keyser’s belated recognition in the United States, and to a slightly lesser degree, by the art world in general. Although it is unfortunate that it took so long for him to receive the attention he deserves, it is also not hard to understand. His work is challenging, often contradictory, and sometimes impenetrable. But don’t shed any tears for Raoul De Keyser; he’s enjoyed the unmitigated appreciation of his painting peers for decades, and his current exhibition at David Zwirner demonstrates why.

With Lisa Yuskavage in the gallery next door providing all the immediate gratification any viewer could tolerate in a single viewing, De Keyser’s exhibition at Zwirner functions as an experiential antidote. The two dozen paintings in the show maintain a quiet, solemn presence in the museum-like space. They demand a lot from the viewer and return the favor accordingly, and thus function as a perfect microcosm of his career.

De Keyser’s curious relationship to the representational image provides the foundation of this exhibition of his recent work. A work like “Untitled” (2006) contains clear references to landscape—an unmistakable horizon line, sky, figures and ground—which might lead one to assume he is involved in a programmatic abstraction of nature in the manner of Tom Nozkowski or Ingrid Calame. However, other paintings on view aren’t so easy to characterize. Take, for instance, “Red Diamond” (2006) with its thin but evenly applied tangerine-colored field buoying a dense scarlet knot of paint in the upper middle section of the canvas. Swaths of light gray activate the perimeter of the painting and condense the pictorial stage. Whether distilled from reality or not, “Red Diamond” reads as non-representational and concrete as a Kasimir Malevich.

Some of the difficulty in trying to peg De Keyser’s work seems related to his being regarded as a “contemporary” painter. In other words, a child of postmodernism. In fact, DeKeyser came to maturity in Belgium in the 1960’s and was a member of the Nieuwe Visie (New Vision), a group that was heavily invested in the formal modernism that motivated Bonnard and Cezanne, who were in turn heavily influenced by late 19th century German formalism. In spite of the group’s allegiances, however, its other members tended toward Fauvist coloration and relied heavily on the natural world for subject matter. De Keyser spun off in a more eclectic, experimental direction that is at least partially responsible for his sympathetic relationship with postmodern painting.

De Keyser’s eccentricities are exemplified in “Trap,” which features a cloudlike form hovering awkwardly above a skewed triangular shape resembling a baseball home plate on a sandy field. A vertical strip of hash marks running along the left edge of the canvas flattens the painting and removes it from the representational universe. The balanced struggle between the “abstract” and the “abstracted” energizes the painting, bringing to mind the late British painter William Scott, who used informal, naïve representation as a gateway to his intuitive, eccentric abstractions of the 1950’s. But, just as soon as a painting like “Trap” triggers a momentary association with a certain time or artist, another De Keyser painting will disrupt it. For instance, “Steek 1” (1987/2005) features a blue cylindrical form vertically bisecting the canvas while a more gestural white brushstroke divides the painting horizontally. A scarlet band sneaks into the far right of the canvas. The marks on the painting each come from different categories: the blue feels three-dimensional; the white feels expressive; and the red works as a formal repoussoir framing the other two. Together the forms conspire to suggest a cooler and more calculated agenda than the one in “Trap”—once again De Keyser keeps us guessing.

It is impossible to neatly classify Raoul De Keyser’s paintings and not end up a mess of fertile contradictions. The isolated moments of banality, inconsistency, history and the sublime are all part of his organic anti-program. As a viewer, and even more so as a writer, one must surrender to the paintings’ ineffable richness, allowing associative synapses to fire at will. The difficulty one faces in analyzing the steps in De Keyser’s work is exactly why he’s a painter’s darling; his spare and efficient abstractions stir up a wealth of discussion about what painting is and where it has come from as few contemporary artists can.

In their two-person show at Ceysson & Bénétière, the abstractions of Rosy Keyser and Joseph Montgomery take us through an eclectic journey of Constructivism, Abstract Expressionism, Arte Povera, assemblage, and Minimalism into their own personal synthesis of painting and sculpture as frictional yet unified objects.

Raoul Peck’s Exterminate All the Brutes

As critical race theory continues to be under attack, Raoul Peck’s Exterminate All the Brutes (2021) provides a solid argument for why historical context matters. The four-hour series is at once a stunning visual text as well as a deeply personal essay that explores white supremacy and its impacts in the Americas. The docuseries is a disruption of white supremacy, documentary narrative form, and the essentializing of the Black experience.