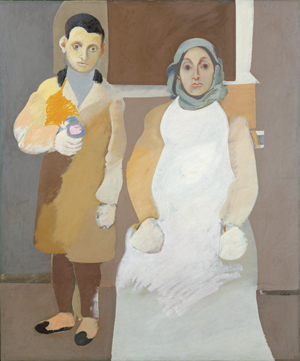 To a certain degree, Picasso is behind the eight ball in Picasso and American Art, which sets out to demonstrate that for each aesthetic territory staked out by an American painter, Picasso had already been there. “That man missed nothing,” in the words of Jackson Pollock, quoted at the exhibition’s entrance. While the curator consistently finds Picassos that resemble and antedate works by an array of America’s finest painters, from Max Weber through Jasper Johns, getting the right Picasso to make such an exact match means you’re inevitably stuck with a lot of minor Picassos.

In “Landscape with Dead and Live Trees” (1919), a small painting in the first room of Picasso and American Art, Picasso really shows his stuff. It’s a humble piece, by Picasso’s standards, in which a distant village and mountains are seen through dark foreground trees. Picasso shapes the clouds in rhythm with the mountains and extends the drawing of the village architecture into the water and trees with a steady hand that brings the entire painting to a harmonic pitch, each detail vibrating in synch with its surroundings. Though “Landscape with Dead and Live Trees” is as good as nearly any painting in the show, Picasso is outdone elsewhere by the painters who seek to emulate him, most forcefully by Arshile Gorky. 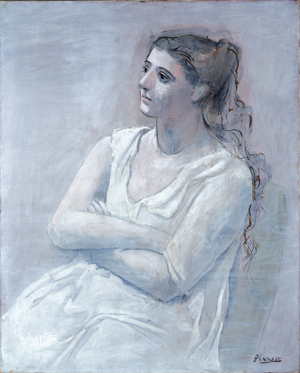 Gorky self-consciously apprenticed himself to Picasso, relentlessly studying and copying his work for many years. He believed that it was only through a mastery of the past—and a painful confrontation with one’s predecessors—that one becomes an artist. Despite his self-imposed subservience to the Spanish master, the emotional honesty and fierce clarity of Gorky’s “The Artist and His Mother” (1926-36) makes Picasso’s blue period look maudlin by comparison and renders its neighbor in the show, Picasso’s “Woman in White” (1923), nearly invisible. Two rooms down, Gorky does it again with “Composition with Head” (1936-37), a large, rough-hewn abstraction that overshadows Picasso’s “The Studio” (1927-28) and might be seen as a precursor to de Kooning’s women. Several of de Kooning’s contributions including his exquisite, small studies from the 1930s and his massive “Woman and Bicycle” (1952-53), surpass Picasso as does an exceptionally strange untitled painting by David Smith from 1935.

Picasso was a synthesizer. He explored more diverse territory in less time than nearly any other artist in history. But Pollock was mistaken. He did miss something. What Picasso achieved in breadth, he sacrificed in depth. The emotional poignancy consistently present in an artist like Gorky is often lacking in Picasso. Pollock must have seen in Picasso the versatility that he could never achieve in his own work, but probably failed to recognize that he had achieved what Picasso never could—an ecstatic, transformative breakthrough based on emotive intuition. Though Picasso’s cubism did revolutionize painting, it was, as it has been labeled, an analytic function deriving more from a comprehensive understanding of painting than from an existential search such as Gorky’s.

The final few rooms of Picasso and American Art are occupied primarily by a battery of formidable paintings by Roy Lichtenstein and Jasper Johns. Johns would entirely command the final room if not for the intrusion of two lack-luster Warhols. It is fitting that Johns, a painter credited with opening almost as many doors as Picasso, should hold forth so strongly at the exhibition’s close. Together, Johns and Lichtenstein flesh out the contemporary shape of Picasso’s ongoing influence. They are both great synthesizers in their own right; Lichtenstein blends painting’s history with popular culture as signified by comic books while Johns integrates personal narrative with an ever changing array of painting idioms. Picasso certainly makes his presence felt in these two painters, but the influence of Gorky is absent. Picasso and American Art suggests that the claims of Gorky’s art on subsequent American painting are less forceful than Picasso’s. Observing the generally cerebral nature of much contemporary art, one cannot help but sense that this is so and wonder about the reasons why. Though it is clear that an art as sophisticated as Johns’ has its attractions, it may be that the psychological burden of an art such as Gorky’s is simply more than most people wish to put up with…or dare to.

With Pleasure: Pattern and Decoration in American Art, 1972–1985

With Pleasure: Pattern and Decoration in American Art 1972–1985 at the Museum of Contemporary Art in Los Angeles presents an affirmative and celebratory survey of a less-studied yet deeply influential movement that presents a historical background for some of the trends we see in contemporary art today.

In a pamphlet accompanying Adolph Gottlieb’s 1954 retrospective, Clement Greenberg wrote, “Picasso, of all people, was struck by Gottlieb’s pictures when he saw them in reproduction, said so, and incorporated them in his big Kitchen painting.”

In this moment of institutional and personal reckoning about the legacy of settler-colonialism and violence against Indigenous people, Kent Monkman’s work invites provocative intersections with the canon of Western European and American art history while exploring themes such as sexuality, colonization, loss, and resilience. Monkman is an interdisciplinary visual artist and member of the Fisher River Cree Nation in Treaty Five territory, Manitoba.