The Forest for the Sea
Smack Mellon 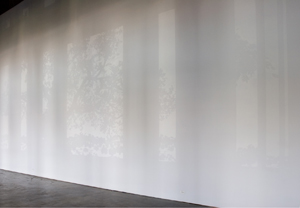 Imagine yourself in a summer cottage somewhere in the north woods of Wisconsin, unlatching the doors and windows for a new season. It is twilight, and shafts of light are peeling in from the fading Edenic sunset. Children giggle in the distance. The oak trees outside cast their shimmering silhouettes on the interior walls. It’s a saccharine sweet cliché that even Garrison Keillor would choke on. However, an installation in DUMBO, of all places, by Brooklyn artist Mary Temple, almost takes us there.

Smack Mellon’s large, airy gallery on the bank of the East River features a wall of west-facing windows looking out on the New York City skyline—formidable competition for a site-specific artist seeking to evoke an Arcadian nostalgia. The Manhattan backdrop is the elephant in, or, in this case, just outside the room. Wisely, she chooses to retreat into the background and deal with the beast by outlasting it rather than taking it head-on; the surrounding urban drama is enlisted for contrast instead of support.

Temple’s “The Forest for the Sea” covers the large east wall of the gallery. Its busy network of branches and leaves, executed with a thin gray acrylic only slightly darker than the wall itself, simulates the effect of cast shadows. The painting, unlit by gallery spotlights, is easy to overlook. According to Smack Mellon’s director, more than a few visitors passed through the gallery without realizing that there was an exhibition on hand. But given time, the piece makes its presence felt. Like memory itself, the effect of Temple’s wall painting is abstract and intangible despite the specificity of her subject matter.

Temple classifies herself as a trompe l’oeil painter. When one thinks of this moniker it’s along the lines of still lifes, interiors and other circumscribed portions of the visible universe—more about the oeil more than the trompe—as well as technical virtuosity. These aren’t Temple’s concerns. Her application of paint is purely functional and her touch is completely depersonalized. As a result, she extends the illusionistic tactic of representation into the psychological realm, triggering the viewer’s personal associations with the imagery rather than objectifying it. As the viewer absorbs Temple’s content, the cacophony of the outside urban environment diminishes in turn. The noise of the perpetual traffic on the Manhattan Bridge begins to sound like wind whistling through the imaginary arbor. The painted leaves and branches seem to rustle and sway. Even if one is aware of its artificial effects, the installation’s psychological presence manages to outflank the viewer’s logical faculties with an inescapable personal reverie.

Temple’s subject matter stirs up associations with Paul Chan, despite his conceptual objective. Like Chan, Temple alters space and, in turn, emotion, and because of this her work runs the risk of seeming manipulative. But isn’t that the nature of any work involved in reordering spatial reality? Couldn’t the same be said of Fred Sandback or even Anish Kapoor? Temple’s painting effectively incorporates the environment its relationship to the viewer with a rare purposefulness that sets it apart from much site-specific work, which can often feel sprawling and opportunistic. However, the most important characteristic of Temple’s wall painting is not its stance in relation to other art, but its capacity to transport a viewer emotionally regardless of its ultimate, and inevitable, critical analysis. Against the imposing backdrop and grinding noise of New York City, this is not a minor feat.