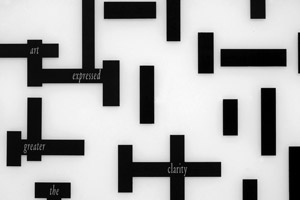 If Joseph Kosuth’s latest exhibition works, it works as installation; if not, then a labyrinth into which I can venture is at best a retrospective of a historically intriguing, though no-longer-relevant artist. At worst, it’s an indulgent anthology of the slogans of Theory, the largely philosophic and rigidly canonical body of texts (Derrida, Foucault, Wittgenstein, Deleuze, Baudrillard, Butler, Kafka, et al.) that some call high or critical theory, others, just Theory, but regardless of the name, since the rise of postmodernism, Theory has served as the educational background, claim to authority and ventriloquist’s dummy through which critics, scholars and even artists speak. With stakes this high, the curious way in which Kosuth’s labyrinth succeeds has unsettling implications for both contemporary conceptual art and the intellectual tradition that has stood as its basis.

a labyrinth is a collection of text-pieces from Kosuth’s long and brilliant career, the latest installment in his guests and foreigners series, fashioned into white neon signs on closely-packed black walls inscribed with quotes from the canon of Theory. The loud hum of the neon, the black walls and their claustrophobic placement continue conceptual art’s tradition of institutional critique, with the dark loud maze inverting the silent white cube of the gallery or museum. Yet there is an important difference: the exhibition space of a labyrinth never invades the office space of Sean Kelly, and the staff is not inconvenienced from its daily routine of selling art (by the way, if you have a little extra, you should buy a piece).

What once saw itself as a revolution has now become a framework. For an artist whose material is quotation, these wall-quotes from Theory’s canon add meaning on meaning, ornament on ornament like the gilded frame on a Fragonard. More significantly, they create an intellectual setting, a selective historical context for Kosuth’s previous works from which new meanings can flow.

And meaning flows. The exhibition conveys an almost overwhelming impression of meaningfulness, yet the meanings themselves, upon closer examination, are not so significant. Kosuth lets various cats out of bags by baldly stating his reasons for selecting and arranging quotes in previous installments of his guests and foreigners series. For example, he divulges that his recent exhibition in Athens was designed as a critique of the current war.

Yet, to understand what Kosuth is doing, it is essential to step back and resist interpreting his intentions, since he has so artfully arranged all available interpretations that it becomes virtually impossible to think outside of them. One could begin anywhere in a labyrinth, with any quote, and comprehend the entire show in terms of that particular quote. If you were to press this insight into the service of analysis, the resulting interpretation would virtually write itself (perhaps this is the reason for Kosuth’s immense popularity in the academy, where his art has become, in his own words, “dissertation fodder”). Behind the curtain would stand Kosuth, authoring the interpretation by turning the interpreter into his mouthpiece, his ventriloquist’s dummy.

To view this as paranoia or bitching about the loss of authorship is to miss the point. Kosuth is certainly a genius and his interpretations via proxy would be both deeply entertaining and richly profitable. Yet it would forego an opportunity to better understand Kosuth’s methods for making conceptual art. Through a subtle manipulation of context and meaning, i.e., the physical embodiment of his work (walls, neon tubing, cloth, glass, paint, etc.) and the theoretical truths of his quotes, Kosuth subverts the aesthetic experience by transposing what theorist Hans-Ulrich Gumbrecht has termed “the production of presence”—the way we oscillate between the hard reality of the materials and the complexity of interpretation whenever we experience works of art.

If, then, for Kosuth, meaning becomes the material (via quoted philosophical truth) from which he creates art, the product of such work is an experiential overload that leaves his hapless viewers grasping for an overarching order to the universe of meanings swirling around them. But to act on this desire, to order meanings into a neat hierarchy, Kosuth would certainly remind you, would be to delude yourself. Kosuth is a slippery case study (if we need one) of why Plato had Socrates throw the poets out of the Republic.

In their recent essay for Critical Inquiry, (“Voices Off: Reflections on Conceptual Art,” Fall 2006) the collective Art & Language offer an acute analysis of conceptual art that slaps the critics they call “the Octoberists” (Hal Foster, Rosalind Krauss, Benjamin Buchloh and Yves-Alain Bois) with the old deconstructionist objection: the “Octoberist’s” key term, institutional critique, is not an analytic distinction but an evaluative one. In other words, the only thing “institutional critique” means is “we like it,” a rather ironic criticism for a cabal of scholars now running some of the finest institutions of art education, criticism and history.

This argument is unnecessary, however, because Theory’s over. It’s not that Theory “lost,” but as James Shapiro points out in the latest BOOKFORUM, “its victory was so complete that we no longer need Theory with a big T.” Like it or not, intentional or not, both Theory and conceptual art have made it. They’re the establishment. For the most part, we no longer care for (or believe in) the universal meaning of conceptual art any more than we’d care for (or believe) an analysis of the inherent significance of any other medium: painting, video, performance, what have you. What we do care for are specific analyses of specific works (no matter the medium) that retain vitality in a post-Theory age.

And it is here that Joseph Kosuth has succeeded. Like Rembrandt, Courbet, Richter and other masters of late style, Kosuth has found a way to extend his work with renewed vigor. While remaining bound within the seemingly impossible strictures of quotation, Kosuth uses meaning, not to build new meaning, but new experience: the tension between unruly meaningfulness and the ill-starred desire to rein it in.

And yet, while it’s a major work by one of conceptual art’s few masters, a labyrinth is not a masterpiece. Walking through it, confronted by forty years of definitive conceptual work, it becomes clear that Kosuth’s has succeeded because, for lack of a better word, meaning has resonated with the affectation of meaningfulness. A perfect example, though perhaps an unfair comparison with his current work, is “One and Three Chairs”: a wooden folding chair, a picture of the chair and a blow-up of the Oxford English Dictionary definition of “chair.” This work (among Kosuth’s best) delights, even challenges the intellect with a range of philosophical associations, from the Platonic form of chairness to Das Kapital’s dancing chairs, animated by the spectral force of alienated labor. In contrast, a labyrinth lacks a certain cleverness and sophistication because Kosuth’s meanings in the guests and foreigner series seem an uncritical acceptance of Theory’s gnomic pronouncements, which, after nearly forty years, have turned into clichés. If we are right that critics must turn to the work at hand, then perhaps it is right that the artist must turn to the cultural moment at hand, and Kosuth ought to be more critical of the meanings he appropriates as his materials. Which is as much as to say, as presumptuous as it sounds, in order to return to the timely-untimeliness of his best work, perhaps Kosuth needs to think twice (or more) about what he means.

MATTHEW L. MCALPIN is a literary critic and contributing writer for the Brooklyn Rail.

Hauser & Wirth's exhibition Günther Förg: Works from 1986 – 2007 presents painting, sculpture, and photography by the German artist, whose estate is now represented by the gallery, in a new institutional setting.