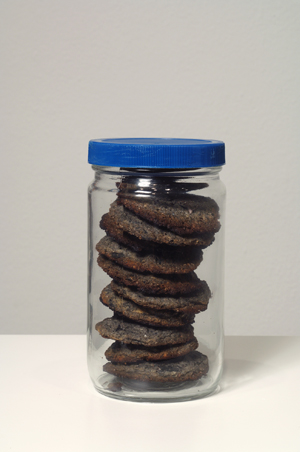 Cookies baked with ashes from “Cremation Project,” 1970. Courtesy of Artist and Galleries.

In 1970, John Baldessari cremated all his paintings, baking some of the ashes into cookies. Documented as a cutoff point in his career by the photo piece “The Cremation Project,” included in his Ways of Seeing exhibit now at the Hirshhorn, Baldessari has since strictly sought to keep his hand out of painting by imposing counterintuitive constraints such as hiring sign painters to execute his artworks.

While an untried maxim holds that one picture is worth a thousand words, Baldessari instead gives equal weight to word and image. This becomes explicit in text-only paintings like his “Solving Each Problem as It Arises,” subtly more pictorial than Concrete Poetry, less heavy-handed than Conceptual Art.

Stating that “The worst thing that ever happened to photography is the viewfinder,” his initiative to “avoid intuitive art” ranges from deploying timed still-cameras to capture images from network TV, to blotting out the heads of news figures with colored spots. Similarly, when he observed that his students spent most of their allotted time during life-drawing sessions perfecting a model’s facial features, then merely sketched the body, Baldessari draped her face. He calls his means of cleansing prejudiced perception “metaphysically turning on the tap until the water runs clear.” A career like Baldessari’s, spent multiplying discrete, strategic interventions, incongruities, and displacements, might have cleared enough conceptual ground for Archimedes’ legendary fulcrum to lever planet Earth. 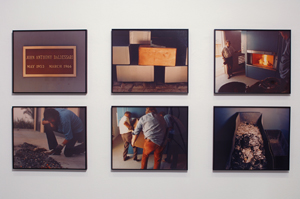 Cookies baked with ashes from “Cremation Project,” 1970. Courtesy of Artist and Galleries.

In a triple threat, Baldessari has curated the four-room Ways of Seeing, selected from the Hirshhorn’s permanent collection, running concurrently with that museum’s compact retrospective of his own works. He also offers Nose & Ears etc. (Part 2) at Marion Goodman’s gallery in New York.

Still putting spots before our eyes, Ways of Seeing juxtaposes curious curatorial choices, like a minor Thomas Eakins (“The Crucifixion”, 1880) beside a solid black abstract Ad Reinhardt, because the down-turned face in the Eakins is shrouded in its own shadow’s opaque blotch. Cogent inclusions pit Medardo Rosso’s beeswax-laden sculptures against waxworks by Joseph Beuys, or pose Jasper Johns’ “Is it a witch or a pretty girl?” trick pictures—appositely—opposite René Magritte.

In his museum talk, the artist/curator rhetorically inquired, “How do you put a structure on seemingly random information?” “Even no order is an order,” Baldessari answered himself. The appearance of Emily Kaufman’s never before shown pre-Jeff Koons-ish sculpture, “Girl on a Fainting Couch” (1975), Baldessari’s Eureka-red-hot pick, has since lead to a renaissance for her largely unrecognized body of work.

Initially exhilarating, then enervating, cultural confluence can concern us, perhaps more than any individual influence ever will. John Baldessari figures in a momentous milieu embracing artists as diverse as Marcel Broodthaers, Richard Prince, Jenny Holzer, Joseph Kosuth, and—I think, exceptionally—Marcel Duchamp, inventing, exploding, and inevitably exhausting key questions which are not so much surpassed in some dazzling, dialectical progression, from the limit to new limits, as they are simply dropped—by intrepid souls, looking another way.

An extended interview with John Baldessari can be downloaded as a free podcast from Hirshhorn.si.edu and through Apple iTunes.