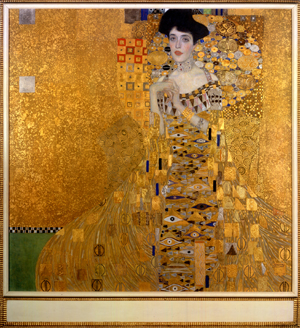 In one fell swoop Ronald Lauder’s $135 million purchase in June of Gustav Klimt’s 1907 portrait, “Adele Bloch-Bauer I”, bestowed Manhattan’s Neue Galerie with a destination artwork and a steady flow of tourists gawking at the most expensive painting in the world. Even hype-resistant New Yorkers stopped by to take a look.

Adele Bloch Bauer—the person, not the painting—was a chic Viennese matron during Austria’s golden age—the world of Sigmund Freud, Ludwig Wittgenstein, Egon Schiele, Alfred Loos and a constellation of other too-intense thinkers, artists and architects not known for their humor or whimsy. Adele had oodles of money, hosted salons, and snuggled up with Gustav Klimt. She was the only person the artist ever painted twice, and she was evidently someone who appreciated the luxurious velour of Klimt’s brush. The painter’s hypersensitive touch polished the surfaces of his “Adele” portraits to the delicacy of a Faberge egg.

In the first portrait, which bears the influence of Byzantine mosaics and Egyptian sculpture, Adele floats in an armchair framed by a shimmering golden sky, an apparition of Viennese high culture as ephemeral as the era she represented. From the moment she was painted, she must have seemed like a mysterious and exotic relic from another era. Adele died of meningitis in 1925 at the age of 43, and even though Klimt painted a second portrait five years later, it is tempting to view this image as funerary portrait like those reserved for Egyptian monarchs. Context aside, “Adele Bloch-Bauer I” is a gorgeously sensual painting, its subject rendered with a grace and poise that’s both approachable and regal.

In contrast, the second portrait, “Adele Bloch-Bauer II” (1912), also on view at the Neue Galerie, is less mystical and more bourgeois. Liquid and abstract, it feels as if a single drop of paint could cause a ripple across the surface. Adele no longer belongs to posterity but fits comfortably in the material world, more likely to be perusing a shopping arcade for bric-a-brac to fill her cart. Klimt doesn’t seem as enamored with her as he once was; no golden tint or rose-colored glasses filter his painterly vision. This sober image makes Adele look almost common.

The Bloch-Bauer Klimts were the subject of a decades-long court battle; once the legal arguments were settled they were publicly reunited at the Los Angeles County Museum of Art. The Neue Galerie was the show’s only other stop. During the last weekend of the exhibit, the museum stayed open until midnight to accommodate post-dinner/pre-club crowd paying homage to Gotham’s newest socialite, sheathed in Plexiglas.

In October, “Adele” was almost unseated by a more abstract lady—Picasso’s “Le Reve” until Las Vegas bigwig Steve Wynn accidentally poked a hole in the $139 million deal. Eventually, “Adele” will no longer be the most expensive painting in the world, but until that fateful day, the Viennese matron will reside in a mansion full of beautiful things in a neighborhood full of other beautiful things, very much at home basking in her golden glow.