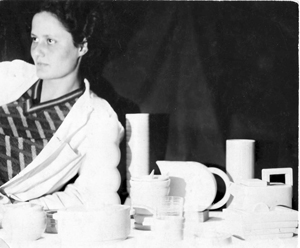 At the recent opening of the Eva Zeisel centennial exhibit at the Pratt Manhattan Gallery, a small white-haired women with a playful look in her eye swept in as if it were her own studio—and in a sense, it was. Eva Zeisel, alive and lively at 100, was busy stirring joy among those who had come to appreciate her art. As she says in her book, Eva Zeisel on Design: The Magic Language of Things (Overlook, 2004), “Design for delight is no doubt the most hopeful description of my wishes.” 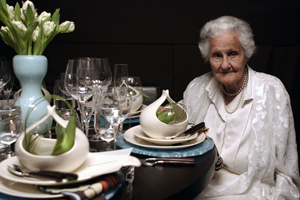 A century after her birth, Eva Zeisel is recognized as one of the most important and prolific of ceramic artists. Her career spans more than 75 years and continues to this day. She is perhaps best known for her spare, monochromatic ceramic “Museum shape” tableware, the essence of simplicity and spirituality. And for years Zeisel has been teaching her personal “design-language” to students, many of whom have become renowned designers on their own.

Born Eva Amalia Striker in 1906, she grew up in an intellectual family, and her mother deliberately hired avant-garde painters as tutors. She began her studies at the Royal Academy of Fine Arts in her native Budapest, but after only a year she was offered her first job as a designer.

From 1932 to 1936, Zeisel worked for the Dulevo Porcelain Factory in the Soviet Union, producing white teapots and stackable tableware. Along the way she came in contact with the best of the Russian avant-garde. In 1936 she was arrested in an early Soviet purge and was accused of participating in a plot to assassinate Stalin, ultimately being held for 16 months in solitary confinement.

She was eventually expelled from the Soviet Union to Vienna, where she married her longtime friend Hans Zeisel. The young couple fled to London just as the Germans annexed Austria, and then to New York, where she worked frantically to help her family escape Hitler’s death camps. In 1939 Zeisel’s chance meeting with Donald Dohner, head of the Pratt Institute’s program in industrial design, led to an offer to organize and teach the first course on ceramic design for mass production in the United States.

From 1942 to 1946, Zeisel turned to a delicate, almost ethereal floral style reminiscent of Georgia O’Keefe, as exemplified by such curvilinear models as “Museum shape” and “Century line,” blossom-shaped tableware and delicate Zen-like dishes. Zeisel’s variety of forms follows the tradition of the early European avant-garde, and much of her inspiration can be traced to Hungarian folklore, as in works like “Apple sugar bowl,” “Gourd shapes in Hyalin Pottery” or “Clover-ware: green plastic salad bowl and nut dish.”

In the late 1950s she returned to Europe and designed for Mancioli, an Italian ceramic manufacturer, where she experimented with modular forms resembling the feminine midriff, with a large inward bellybutton. Her famous wall divider is made out of such modules—colored ceramic elements, resembling “strange amphoras.” The influence of Brancusi, who himself used modular elements in sculpture (“Infinite Column”), also can be traced to Zeisel’s stackable teacups, teapots and containers, cylindrical in shape to more efficiently fill a kiln, as well as easy to store in tight places.

Since the 1980s, Zeisel has designed vases with distinctive eosin glazes in Zsolnay (a Hungarian ceramist manufacturer), and in the ’90s she collaborated with KleiReid (a single name for two young ceramists in New York) on porcelain featuring a very elegant satin matte glaze, as well as other utilitarian objects out of glass. As the artist herself sums up her life work in Eva Zeisel on Design: “The love involved in making it is conveyed to those for whom you made it.”